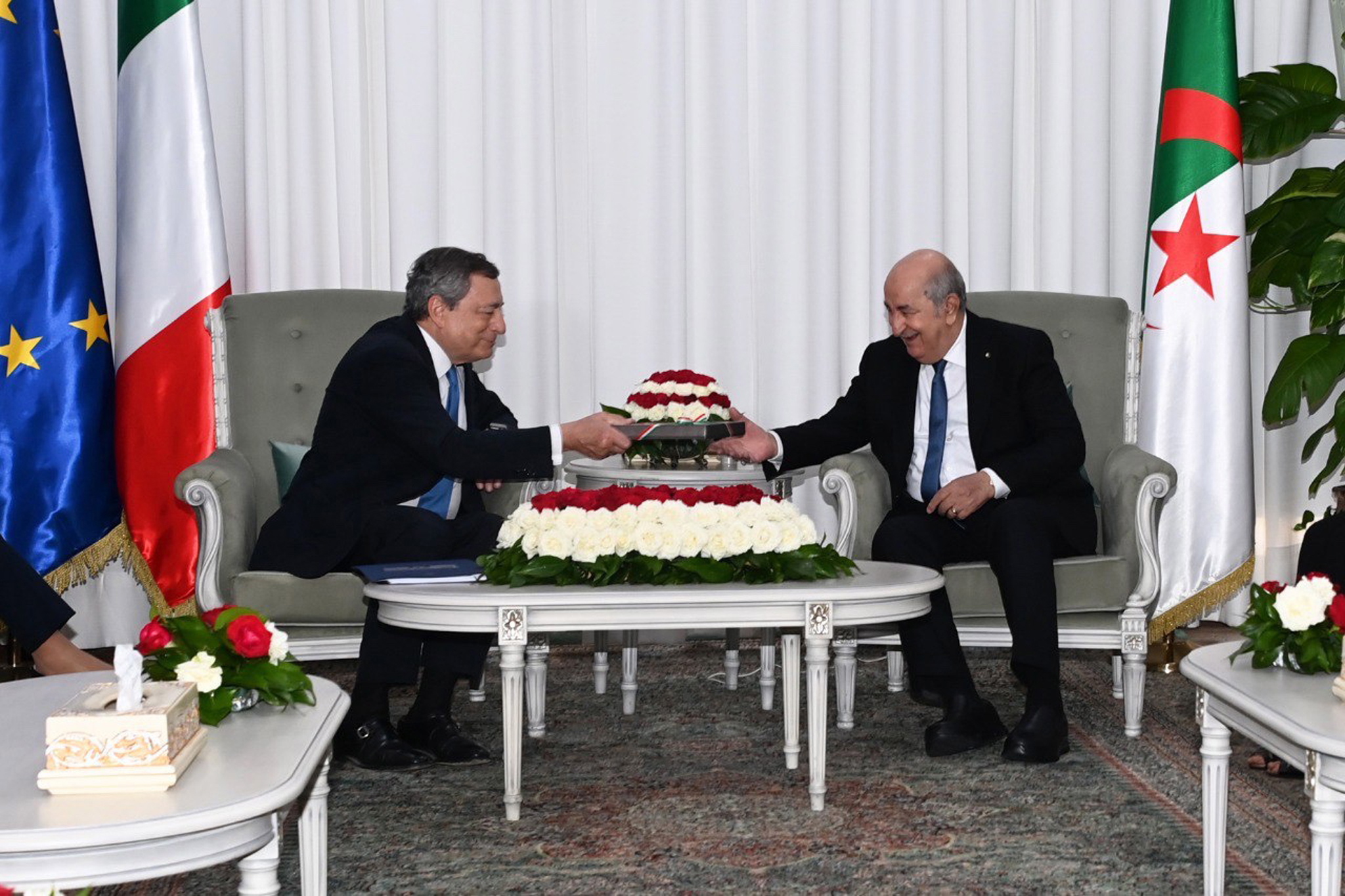 The parliamentary music began to play last Thursday, when Mario Draghi decided to present his resignation. It is the third time in this legislature that the uncomfortable sound of the crisis returns to the chambers. And he will continue to do so until Wednesday, when the Italian prime minister will have to ratify his decision or back down to save the country and the interests of Europe in the coming months. The staging will be a motion of confidence in Parliament where each party must stand out. Some will stay out and others will remain within the government majority. That photo, after five days of political absurdity that have kept the country and Europe in suspense, will serve the former president of the European Central Bank to make the final decision. A vaudeville that not even the savior of the single currency has managed to escape.

The Italian Prime Minister traveled to Algeria on Monday to finalize the agreement that will allow Italy to greatly reduce its dependence on Russian gas, which will go from 40% to 25%. The international commitment, they remembered in the Chigi Palace cooling optimism, is the reason why he had not resigned yet. But the delay is also explained by the attempt by the President of the Republic, Sergio Mattarella, to create conditions in Italy and abroad that push him to reconsider.

External pressure has been enormous these days: from Brussels to Washington, passing through the Ukrainian president, Volodímir Zelenski. Supporters, such as Matteo Renzi, have multiplied in recent hours asking for its continuity; 1,000 mayors have signed a petition not to resign; and several spontaneous demonstrations ran through the streets of some Italian cities to ask Draghi – the sixth consecutive prime minister who has not left the polls: the last to overcome this democratic ritual was Silvio Berlusconi in 2008 – not to leave.

On Monday, in addition, the method with which the final decision will be staged was formalized. Parliament will organize a vote of confidence in the chambers that will allow Draghi’s support to be shown numerically. The prime minister will present his vision of the matter, listen to the reply of the parties and verify if the unity that he demands exists. An institutional staging that will further complicate the scare that he had planned on Thursday. Especially if the vote, which will begin in the Senate, is positive. For this reason, a large part of the parliamentarians consulted on Monday by this newspaper were optimistic about the continuity of the former ECB president at the head of the Government. “It is time to ask for responsibility,” former Prime Minister Matteo Renzi told EL PAÍS.

Draghi’s entourage assured on Monday afternoon that there are no news and that the important thing is still to verify if there is room for political action in case he does not resign, something that is not guaranteed. In case of reversal of his announced resignation, Draghi’s team will have to prepare the ground to offer him a decent exit after having been inflexible for several days. The total unity that he claims does not exist. The M5S, in fact, had to suspend its telematic assembly on Sunday when tempers began to flare and its members were ripped off with insults. There were cries of “traitors” to those who advocated continuing in government and threats. “We will spit in your face”, they continued to intimidate each other. Their leader, former Prime Minister Giuseppe Conte, had to turn off the camera and the sound to prevent ridicule from devouring them. A sample of the accelerated decomposition that the party is experiencing, on which the future of Italy and part of Europe depends right now.

On Monday, the reproaches returned to the meeting. But more and more voices, like that of the influential head of the M5S parliamentary group, Davide Crippa, are calling for the crickets vote in favor of the confidence motion. This internal opposition is about to create another schism. The operation that some formations sponsor —led by Crippa himself— would consist of provoking another flight of parliamentarians from their ranks. Last week they already lost some 60 deputies and senators, who left with the foreign minister and former leader of the M5S, Luigi Di Maio, to a new formation. The idea is that this Tuesday the escape of two dozen more parliamentarians is announced, which would leave the M5S as an empty shell; and Conte as a general without troops. In this way they would offer Draghi the head of the leader cricket and to the new formation that emerged from the split as a substitute for the anti-system party. “That would be enough. There would be a new game that would replace the 5 Stars and Conte would be out of the game. He has ceased to be a person he can be trusted. And we think that Draghi will accept”, says an influential MP from the Democratic Party.

The key that will unravel everything will be that M5S fracture. The League and Forza Italia have already warned that they will not accept being in another government with the crickets. So if the split occurs, the scenario would also be favorable for both parties. The problem is that an election now would be a great opportunity for the right. Matteo Salvini, leader of the League, went to visit Silvio Berlusconi on Sunday at his mansion in Sardinia. The polls favor them: the left no longer has the M5S to concur in a coalition and would not have time to rearm. The only drawback is that Salvini would lose the leadership of the coalition and would remain in the hands of Giorgia Meloni, leader of the Brothers of Italy and third partner in the coalition. That is why, in the last few hours, he is weaving a strategy with Il Cavaliere to concur in a single list for the hypothetical elections. It would be a way to overtake Meloni and claim the prime ministerial position if he wins them. But the possibility of early elections receded again late on Monday.

What is to come was rehearsed in Syria | International

Keys | The European veto on Russian oil: an important step, but not definitive | International

Treaties: The European Parliament demands the end of the veto in the EU to circumvent countries like Hungary or Poland | International
June 9, 2022

Treaties: The European Parliament demands the end of the veto in the EU to circumvent countries like Hungary or Poland | International

Asylum applications increase by 90% in the European Union | Spain

On the hunt for war crimes in Ukraine with Agent Yuskevich’s patrol | International
June 20, 2022

Colombia Elections 2022: Petro on Piedad Córdoba: “Incomprehensible that such imprudence is committed” | Presidential Elections Colombia
May 27, 2022

China Sanctions and Bans Nancy Pelosi After Her Visit to Taiwan | International
August 5, 2022