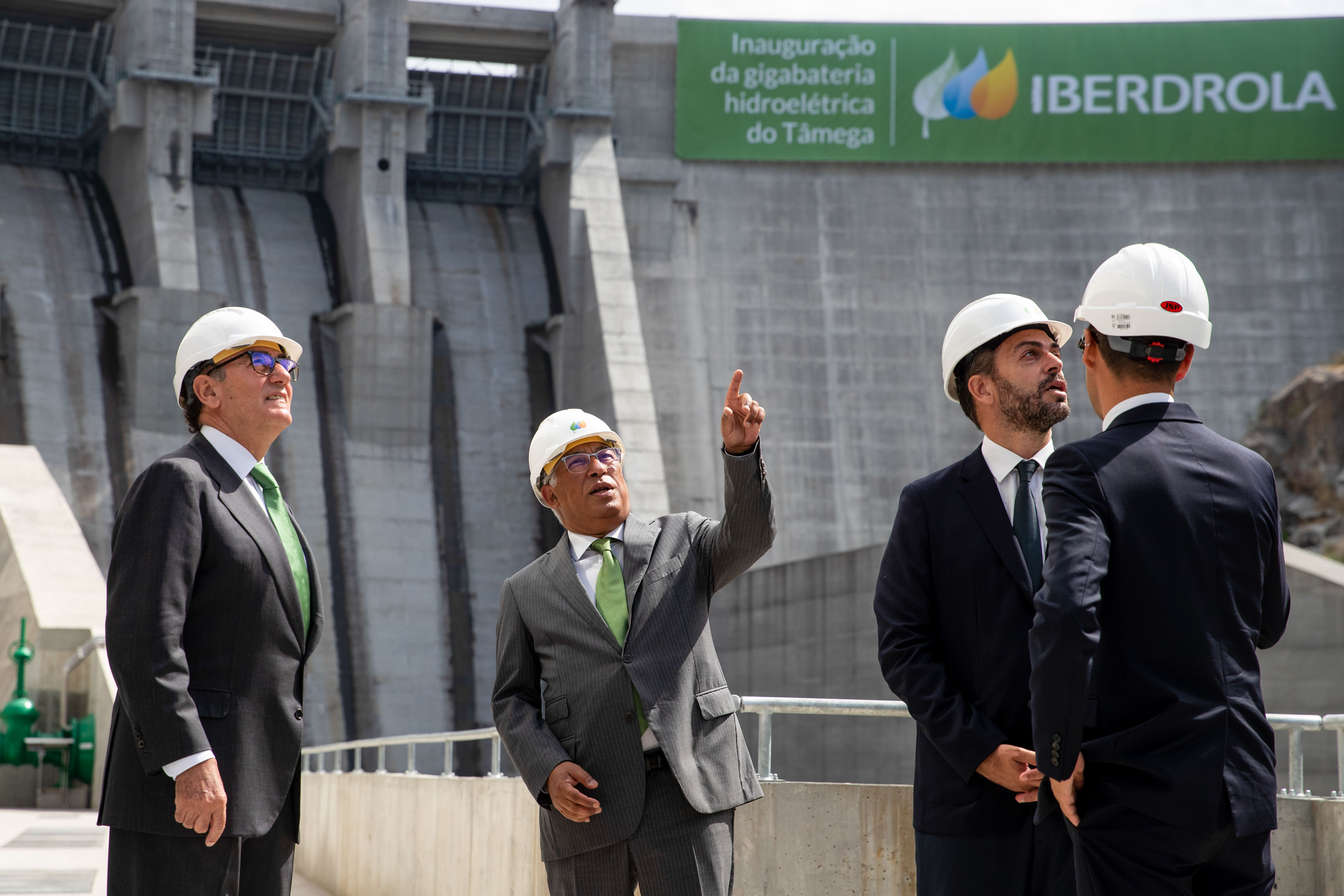 The Prime Minister of Portugal, Antonio Costa, and the President of Iberdrola, Ignacio Galán, inaugurated this Monday in Portugal the Támega gigabattery, a large hydroelectric storage project whose construction has lasted for almost eight years and has involved an investment of more than 1,500 million euros. Once this project has been launched, the president of Iberdrola has announced that the Spanish electricity company will accelerate its commitment to renewable energies in Portugal with a boost in investments in the coming years with an additional 3,000 million euros in wind and solar energy. Sánchez Galán praised “the environment of legal stability and the good dialogue achieved by the Portuguese Government in recent years”.

With a capacity of 1,158 MW, the Támega electro-producer system is capable of storing 40 million kWh, equivalent to the energy consumed by 11 million people for 24 hours in their homes, making it one of the largest energy storage systems in Europe. The complex is made up of three plants —Alto Támega, Daivões and Gouvães— and, thanks to its pumping capacity, it can store energy to be used when it is most needed; a cycle of energy efficiency and true circular economy that will increase the total electrical power installed in Portugal and will avoid the emission of 1.2 million tons of CO₂ per year, favoring the fight against climate change.

This great work of engineering will prevent the importation of more than 160,000 tons of oil per year. Likewise, the construction of the complex in this area of ​​​​northern Portugal has had a plan of social, cultural and environmental actions, which benefit seven municipalities, and to which more than 50 million euros have been allocated, as explained by the company through a statement.

Ignacio Galán explained that this energy complex has been possible thanks to “the environment of legal stability and good dialogue achieved by the Government of Portugal in recent years”. In addition, this infrastructure shows that the two great goals of Europe’s energy policy, energy independence and decarbonisation, are perfectly compatible as long as work is done on the electrification of the economic and productive system.

During his speech, Galán announced that the company will double the investments made in the Ggigabattery in the coming years, reaching 3,000 million euros, which it will allocate to new wind farms and solar plants already under development or construction.

In the current context of the energy crisis in Europe due to tensions with Russia after the invasion of Ukraine, Sánchez Galán stressed that this infrastructure shows that “the two great goals” of energy policy, energy independence and decarbonization, “are perfectly compatible as long as work is done on the electrification of the economic and productive system”.

Specifically, this investment effort in renewables of 3,000 million euros more will allow Iberdrola to advance in the promotion in Portugal of wind and solar energy already under development or construction for up to 3,000 megawatts (MW), in a key market for electricity and where it is struggling for the green leadership with the local EDP or Endesa. Galán stressed that “the challenge” of energy independence and decarbonization will require “enormous investments in a complex” economic scenario, for which he thanked Costa for his “involvement” in allowing Portugal to have “a predictable planning and regulatory environment ”, as well as with “agility in procedures” to address this growth in renewables.

Within this new boost to renewables in the Portuguese country that Iberdrola will give, Galán framed the development of the 450 MW of wind power that will be hybridized in this Támega project and the development of another 2,500 MW of photovoltaic solar power throughout Portugal.

The end of cheap flights?: European airlines increased tickets by 30% this summer | Economy

By admin
Recent Posts
Latest News
Facebook Twitter WhatsApp Telegram
Back to top button
Close
Featured Posts
Metro CDMX Accident: The failed alerts of Line 12: from the logs of the work to the recordings of the workers
June 3, 2022

Metro CDMX Accident: The failed alerts of Line 12: from the logs of the work to the recordings of the workers

Biden falls off his bike during a walk on the beach | International
June 18, 2022

The Conservative Party explores how to speed up Boris Johnson’s departure from Downing Street | International
July 8, 2022

Congresswoman Alexandria Ocasio-Cortez arrested in the middle of a pro-abortion protest | International
July 20, 2022

Portugal is facing a wave of fires that have already affected 2,500 hectares | International
July 11, 2022

Portugal is facing a wave of fires that have already affected 2,500 hectares | International

The allies and the Ukrainian government distrust the military turnaround announced by Russia | International
March 27, 2022

The Russia of the future is also preparing itself in exile | International
June 3, 2022