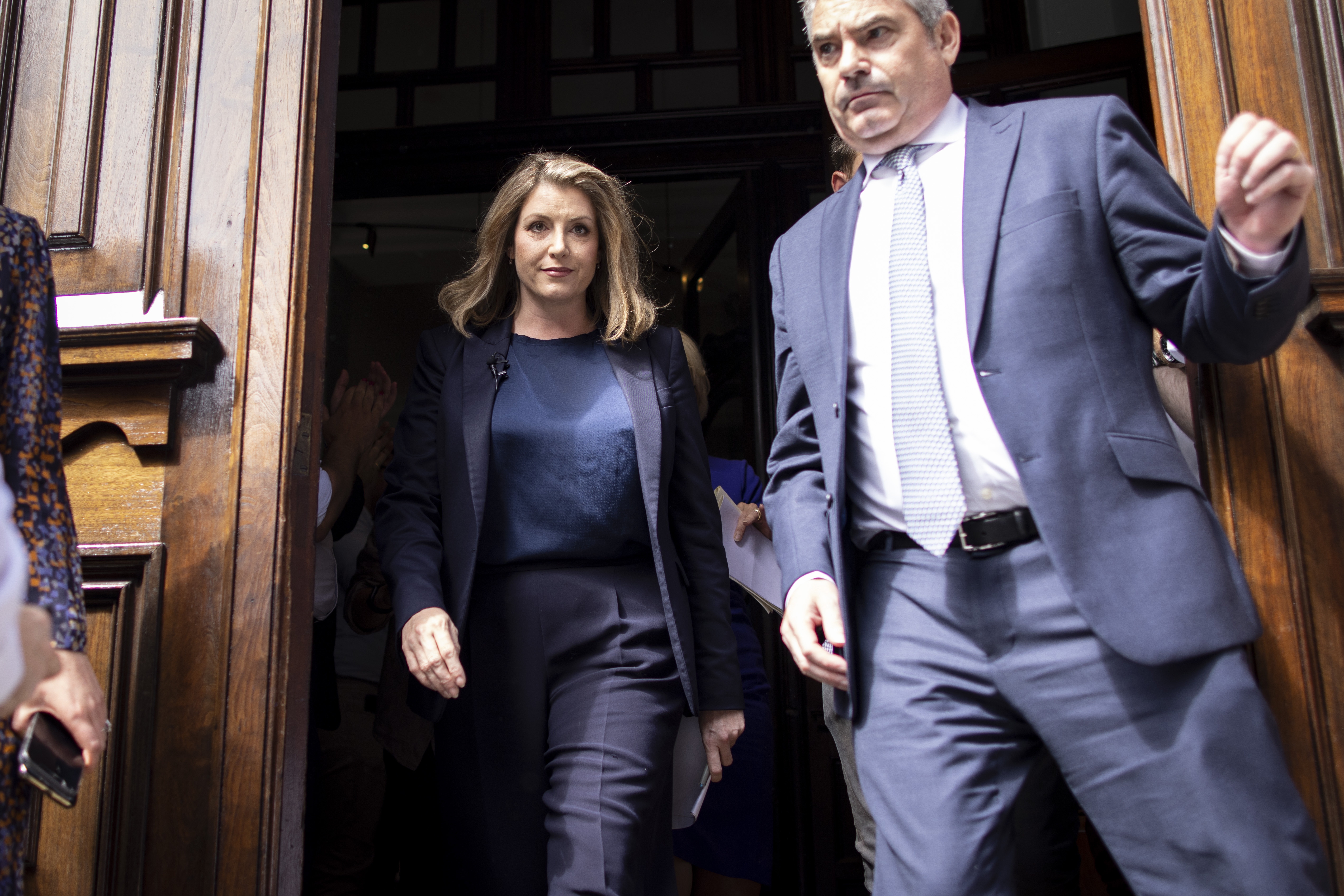 Penny Mordaunt (Torquay, United Kingdom, 49 years old) has said that part of her job, as a young woman, was to allow herself to be cut in two with a saw. She was a magician’s assistant, one of the jobs she took to help with the housekeeping. Her mother had died of breast cancer when she was 15, and that same year her father was diagnosed with the same disease. Mordaunt aspires to come out of the competition in one piece to lead the Conservative Party. Regarding magic, she already supposes enough to make her party colleagues believe that, after more than 10 years in power and the disastrous mandate of Boris Johnson, a new beginning from scratch, fresh and unpolluted, is possible.

That is what Mordaunt, with a middle-class, provincial English background, means to many conservatives. And that is why the Secretary of State for Commerce, the last to announce his candidacy, has been the surprise that everyone sensed. Already in the first hours of the competition, when the clear favorite and the one who collected the most endorsements from deputies was the former Minister of Economy, Rishi Sunak, the polls began to suggest that the real hurricane was called Penelope Mary (Penny). Ultimately, Sunak came out on top in the first round with 88 votes and Mordaunt came in a strong second place with 67 votes.

The company YouGov conducted an express survey among party members – some 200,000 must vote throughout the summer – and Mordaunt was the great favorite, with 27% support. A long way from Sunak, who had a support of 13%, or from the current Foreign Minister, Liz Truss, also preferred by 13%. The relevant thing about the sample, however, was that Mordaunt would devastate, according to those projections, any rival in the final competition, with figures that double her support compared to the rest of the competitors. Mordaunt would obtain 67% of the vote compared to 28% for the former economy minister, according to the polls.

“We must win the next elections. And I am the best bet to achieve that victory. I am the candidate the Labor Party is most afraid of. And he has plenty of reasons to think so, ”said Mordaunt during the official presentation of his candidacy, this Wednesday. The video with which she exposed her proposals to lead the Conservative Party had the right ingredients of flags, patriotic scenes and an eagle-eye tour of the British landscape to awaken the patriotic ardor that nests in the hearts of many. Tories. With the background music of I Vow To Thee, My Country (To you I surrender, my country), by Gustav Holt, the unofficial anthem that sounds to reinforce that something is as English as Oxford ivy, the three minutes conclude with the voice of the candidate: “Our competition for leadership must be a little less about the leader and a little more about the ship.”

Mordaunt has recalled on numerous occasions his time as a reservist for the Royal Navy (the Royal Navy). Her father served as a paratrooper, and she as a second lieutenant on the destroyer HMS King Alfredpermanently moored at Portsmouth.

After graduating in Philosophy from the University of Reading, she worked as communications director for the Conservative Party, under William Hague, and even handled foreign press relations for George W. Bush’s campaign for the US presidency. .

Some want to see her as the reincarnation of Margaret Thatcher, and she cultivates that evocation herself. In 2019, with Theresa May as Prime Minister, Mordaunt was the first woman to serve as Defense Minister. She had previously been Minister for International Development, and in the previous government, that of David Cameron, she already held a couple of Secretaries of State.

Johnson kept her on his Executive, but relegated her to lesser positions. Before the prime minister’s resignation, she was —and is— heading the Secretary of State for International Trade. She endured in the Government, despite her disagreements with Johnson, and chose not to join the cascade of resignations, in the midst of the crisis that ended with the sinking of the prime minister.

Mordaunt was one of the voices that defended leaving the EU, in the 2016 referendum. And also the one responsible for an affirmation that has haunted her until today, when she assured that the United Kingdom could never exercise the veto to prevent the imminent entry of Turkey in the European Union. Neither was it imminent, nor was the veto impossible, but Mordaunt has never rectified a statement that ended up being part of the set of lies that promoted Brexit.

With a reputation for irreverence, and an ironic humor, Mordaunt participated in 2019 the reality show of television in Splashin which some celebrities learned to jump into the pool from the diving board.

For a time, he won the complicity and praise of the LGTBIQ movement, when he stated in the House of Commons that “a trans woman is a woman, and a trans man is a man.” She harassed by some conservative colleagues, who accused her of being the candidate woke up, who winked to the left, and ignored the cultural wars waged by the left wing of the party, Mordaunt has since qualified his position, as he made clear this Wednesday: “I am legally a woman. Some people who were born male and have undergone a gender recognition process are now legally female. But that does not mean that they are biologically women, as I am, ”he defended.

No one is very clear about what his government program would be, if he ends up reaching Downing Street. He defends “common sense” and the “principles that have defined all life” to the Conservative Party. She also promises to lower taxes. For now, with immediate effect, if she becomes prime minister, she will halve the VAT on gasoline, and increase the tax base threshold from which the middle and lower classes must pay income tax. All this combined with a vague promise of fiscal orthodoxy, and the commitment that the percentage of debt with respect to GDP will be progressively reduced year after year.

But it is above all the idea that the hypothetical election of Mordaunt ensures that everything changes —goodbye to the Johnson era, and all those who were its direct accomplices— and that everything remains the same —Brexit, low taxes—, the secret weapon of the most attractive candidate for members of the Conservative Party.

Funeral of Elizabeth II: The four of them are sad | International

Bonoloto: check the result of the draw today, Saturday, October 1, 2022
2 hours ago

By admin
Recent Posts
Latest News
Facebook Twitter WhatsApp Telegram
Back to top button
Close
Featured Posts
As a general, as a Congress, as a whole: Brazil outlines COP26 and opens its doors to the Garimpo na Amazônia | News
March 9, 2022

As a general, as a Congress, as a whole: Brazil outlines COP26 and opens its doors to the Garimpo na Amazônia | News

Video analysis | The three circles of influence in the world that Putin dreams of | International
March 9, 2022

AMLO in Washington: Biden and López Obrador will negotiate the reinforcement of the borders | International
July 12, 2022

AMLO in Washington: Biden and López Obrador will negotiate the reinforcement of the borders | International

Hungary again distances itself from the EU to obtain more gas from Russia | International
July 21, 2022

Italy Elections: Salvini goes from being the ‘captain’ of the right to a comparsa of the future ultra government | International
5 days ago

Italy Elections: Salvini goes from being the ‘captain’ of the right to a comparsa of the future ultra government | International

China insists on blaming the US and NATO for the war in Ukraine | International
March 9, 2022

The British pound is sinking: why it has fallen, consequences for England and possible solutions
3 days ago

The British pound is sinking: why it has fallen, consequences for England and possible solutions

Pope Francis does not rule out resigning: “It would not be a catastrophe” | International
July 30, 2022

Pope Francis does not rule out resigning: “It would not be a catastrophe” | International

Assassination of Shinzo Abe: Shinzo Abe is not the first: recent history of assassinations | International
July 8, 2022