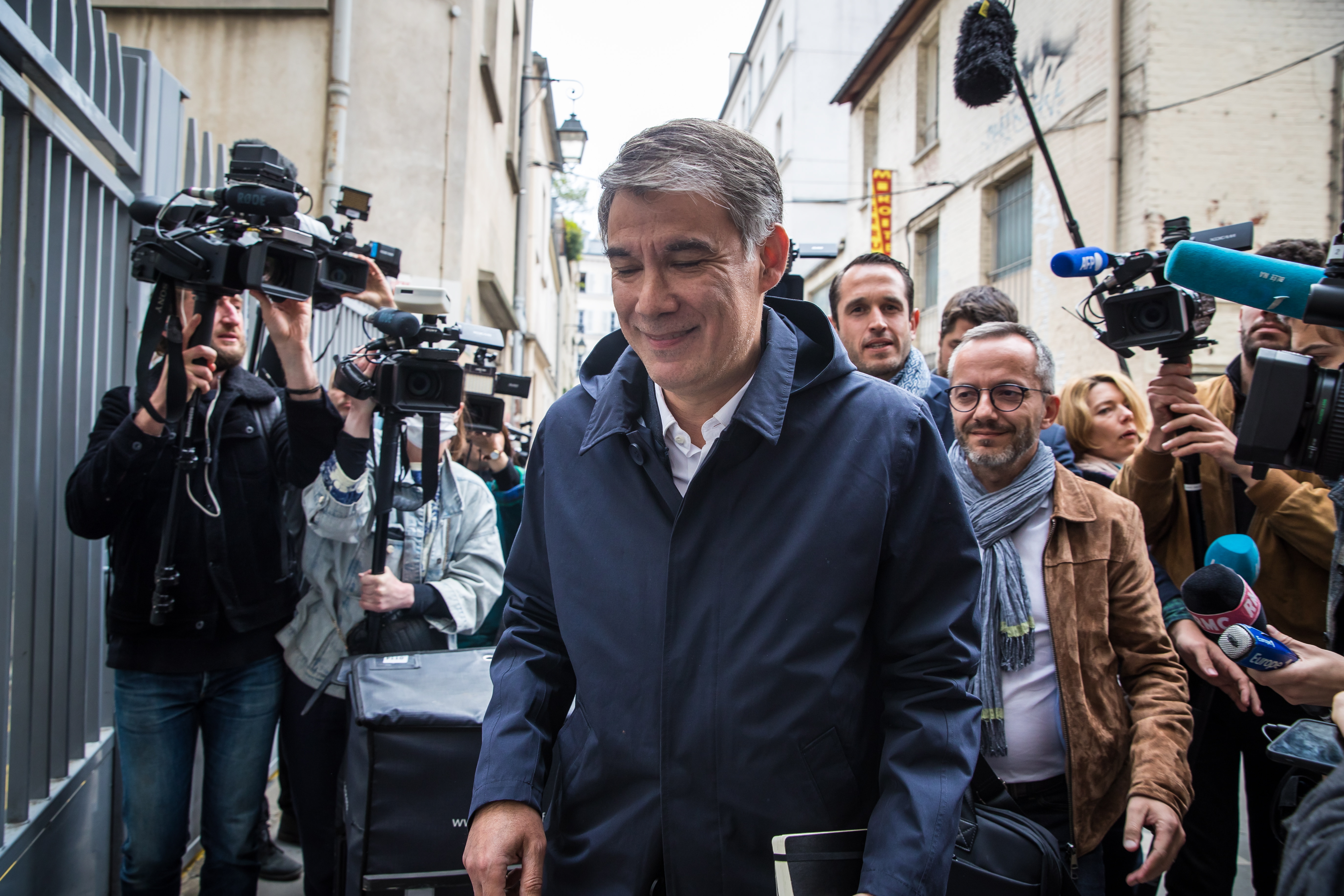 The Socialist Party of France is looking for its future after the pact with the populist left of Jean-Luc Mélenchon, widely approved by the National Council of the formation on Thursday night. The vote by the leadership of the political formation that has been the backbone of France in recent decades is nothing more than the last tear, although perhaps the definitive one, of an open wound, at least, since the first great electoral defeat of the Socialists five years ago years. For many, especially those who support the turn to a “rupture left”, as the Melenchonist unifying project is defined, the seams of the formation began to break before, during the François Hollande government (2012-2017).

Approving the pact reached on Wednesday with the other great leftist formations — Mélenchon’s France Insumisa, the Communist Party and the ecologists — to achieve a majority in the June legislative elections was, for some of the militants, the only way out before a political landscape that has changed radically in recent years. A landscape in which the traditional parties no longer seem to have a place, neither to the left nor to the right, as demonstrated by the other great electoral debacle this year, that of the conservative Republicans.

For those who cry out against an agreement that calls into question unquestionable principles of French socialism up to now, such as its Europeanism (the pact accepts “not respecting certain rules” of the European Union), it supposes, on the contrary, the death certificate of the party by Francois Mitterrand. In any case, the PS after this Thursday will not be the PS of just a week ago and its future is, more than ever, in doubt.

The “titanic battle”, as defined by the socialist chief negotiator, Pierre Jouvet, for and against the agreement was fought until the last moment.

Mélenchon’s “radicality” is going to “scare” the voters, warned several of the almost 300 participants in the very heated discussion of more than three hours that preceded the vote, in which finally 167 members (62.3%) they approved the agreement with the melenchonistas, against 101 votes against and 24 abstentions.

“From Jean-Jaurès, Léon Blum to Mitterrand, we have always contributed a radical project. Of Mitterrand they also said that he was dangerous for democracy ”, the first secretary of the PS, Olivier Faure, had replied to the criticism in his final speech. “The voters have abandoned us because they think that we no longer have anything to say, nothing to transform,” said Faure, one of the main promoters of the agreement, who recognized that the “frustrations” of those who oppose it are “legitimate”, but who refuted the accusations of “abdicating” before the melenchonistas and defended, among dissenting voices that interrupted him again and again, that “there is no plan B” because the other parties have preferred to negotiate with the melenchonistas and not with the socialists. And “if we don’t propose alternatives, what will happen in the end is that the only alternative to Macron and the liberals will be the extreme right, which advances in every election,” he argued. Against this, he stressed, the agreement opens “a common adventure with all the left and environmentalists.”

An argument that has not convinced historical figures of the party such as former Socialist Prime Minister Bernard Cazeneuve, who has already fulfilled his threat to leave the PS if an agreement with Mélenchon is closed. Another prime minister of the last socialist government, Jean-Marc Ayrault, described the agreement between melenchonistas and socialists as “botched”, with which he expressed his “disagreement” because it constitutes “a kind of indefensible resignation” that threatens to fracture the party, he said to the Agence France Presse. The former head of both, François Hollande, has not yet gone so far as to leave the party, but he has made clear his “rejection” both “on the substance and on the constituencies”, an issue that could cause some socialists decide to go on their own despite the pact.

This is what some opponents of the agreement are already threatening to do, such as the powerful president of Occitania, Carole Delga, another fierce critic of any alliance with the rebels who announced that she will vote against the pact. The influential socialist has already presented the candidates for the legislative elections in her region, ignoring the distribution of constituencies (one per seat in the National Assembly, which has a total of 577 seats) with the melenchonistas, which gives the PS some 70 applications.

It is not, however, a purely generational battle. Although it is true that the majority of those who most fiercely oppose the pact are the former socialist barons, there are also historical figures of the party such as Martine Aubry who support the agreement despite their “deep reservations”, especially in terms of of European politics, he said in a lengthy statement. For the former first secretary of the PS and current mayor of Lille — the daughter of another historical socialist, the convinced Europeanist Jacques Delors — the agreement was necessary because left-wing voters asked for it. But this does not mean, she added, that the PS now has internal work to do to “begin the reconstruction and refoundation of its project for a social, ecological, democratic and secular Republic.”

The socialist presidential candidate, Anne Hidalgo, took an intermediate position this Thursday. In her first public statement on the matter, the mayor of Paris, who a few weeks ago had opposed negotiating with Mélenchon, said that she is still very critical of the agreement, but specified that she will not “prevent” it.

The pact “does not provide the necessary guarantees on essential issues such as NATO, the Europe of defense, secularism and universal values,” he said in a statement. However, he added, “in the face of democratic, social and ecological urgency, I do not wish to prevent an electoral agreement that seeks to combat ecological and social regression.”

Previously, former close allies of Hidalgo, such as mayors Joanna Rolland (Nantes), who led his ill-fated campaign, or Mathieu Klein (Nancy), one of his spokesmen, had made a public appeal along with other socialist mayors to support, “by responsibility”, the pact of the left, although at first they had ruled out any negotiation with Mélenchon. Along the same lines was the mayor of the second largest city in France, Marseille, Benoît Payan, who called for the “union of all leftist and socialist forces” under the platform New Popular Ecologist and Social Union (NUPES).

While the Socialists were preparing for the biggest challenge to the future —very much in doubt— of their party, another formation that is seeking a parliamentary majority in June, President Emmanuel Macron’s La República en Marcha (LREM), announced its name change on Thursday. to Renaissance.

“Today we are starting a movement to refound LREM in order to continue expanding this political movement” that seeks to become a “popular party with a vocation to be open” to always have “the possibility of choosing the lights over the dark,” he explained at a conference. press the general delegate of the Macronist formation, Stanislas Guerini.

The macronistas will present a single list called Ensemble for the legislative elections, together with their traditional allies, the centrist MoDem party, and the Horizontes platform of former Prime Minister Édouard Philippe, who has obtained fifty constituencies for his candidates.

Dmitro Kuleba: “The Russian people share the responsibility for what Putin is doing” | International

Gorbachev in his private conversations with Felipe González in 1991: “There are many dangers in every step forward” | International
4 weeks ago

Gorbachev in his private conversations with Felipe González in 1991: “There are many dangers in every step forward” | International

Venezuela: The proposal of a group of intellectuals to lift the sanctions against Chavismo wins supporters among the opposition | International
April 19, 2022

Venezuela: The proposal of a group of intellectuals to lift the sanctions against Chavismo wins supporters among the opposition | International

Ukraine: The Twenty-seven brush the agreement for a partial embargo of Russian oil | International
May 30, 2022

Ukraine: The Twenty-seven brush the agreement for a partial embargo of Russian oil | International

Beto O’Rourke: The Democratic Hope in the Closest Race for Texas | International
August 1, 2022

Beto O’Rourke: The Democratic Hope in the Closest Race for Texas | International

Ukraine: No food, medicine or supplies: the horror story of Azovstal survivors | International
May 4, 2022

Ukraine: No food, medicine or supplies: the horror story of Azovstal survivors | International