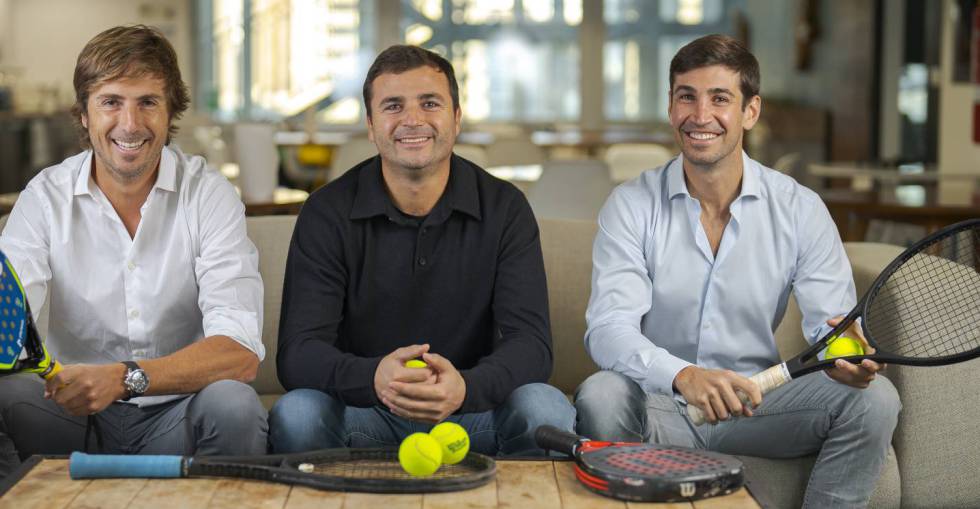 Playtomic has made something as simple as reserving a paddle tennis court a million dollar business. The procedure has made life easier for those who practice this sport in Spain, where licenses have doubled in just five years, to almost 100,000. Through the application developed by the company, which has 150 employees, anyone can rent sports facilities to play a match with friends or strangers —classified according to their level of quality—, as well as interact with other players and follow the profiles of the modality stars. The company had a turnover of 1.4 million in 2019, 25 in 2020 and 80 million in 2021. Now it aspires to exceed 150 in 2022. Based in Madrid, it dedicates little effort to marketing. By word of mouth they have already managed to attract a million players in thirty countries, most of them in Europe.

The starting point was to find a solution to a problem. Félix Ruiz, born in Marbella, moved to Madrid a few years ago to continue his business. Practicing paddle tennis or tennis in the capital was more complex than on the Malaga coast. Among other reasons, such as the schedule or the scattered location of the clubs, the biggest drawback was that he hardly knew people to play with. “There are applications like Airbnb to rent a house or Uber to order a car, but there weren’t any to reserve a track, so I decided to create it,” explains Ruiz, executive director of Playtomic, who joined Pedro Clavería and Pablo Carro in 2017 to develop the project.

They studied the market and saw that it was a sector with numerous companies from software that provided services to the clubs to manage their facilities. “And if we buy them all?” asked the man from Malaga, who also includes Tuenti and Jobandtalent in his resume as an entrepreneur. The first acquisition was Syltek. Then came CentroReservas and Reservaplay in Spain, Tennisbookings in the United States and Prenotauncampo in Italy. In addition, they hired commercials who travel to the clubs to sell the benefits of their product.

The company, which now sponsors the World Padel Tour, went from being a company creating software to one that went directly to the consumer. In the last two years, Playtomic has bought 15 companies in various countries, such as Kourts in the United States and GotCourt in Switzerland. A model that will continue in the coming years, reinforced by the raising of 56 million euros in an investment round closed last December. “It’s a way to speed up growth,” underlines Ruiz, who explains that the company is profitable but has not yet turned a profit because the income is invested in new purchases. They already manage some 5,000 clubs in thirty countries. Spain, Italy and Sweden are the main markets. They have just over a million users, who reserve almost another million tracks per month through the application.

Part of the business model is based on this: they charge 29 cents for management (2% of the 15 euros that, on average, it costs to rent a track in Spain). Another formula is the fee that clubs pay to use their software, about 100 euros per month, which, in addition to booking courts, allows them to manage accounting, their stores or even turn on the lights or open the venues from the application. There is a third way to make money that Ruiz is excited about, who is already developing a subscription model with a price of 10 euros per month. Playtomic seeks to be for paddle tennis -and other racket sports such as tennis or squash- what Strava is for cycling: “Landing the professional world in the amateur world”, as the executive director explains.

At the moment, the version is in testing with many features, such as the installation of cameras on the tracks that allow players to review the highlights or check them with the hawk’s eye. The images will also serve to offer personalized statistics to each player, such as the percentage of first serves or their best shot.

The Government prepares a response plan with millionaire aid | Economy

Check Also
Close
Salary of the ONCE: check the result of today’s draw, Sunday, October 2
18 mins ago

Last minute of the war in Ukraine, live | Hundreds of detainees in the protests against the military mobilization announced by Putin | International
2 weeks ago

Last minute of the war in Ukraine, live | Hundreds of detainees in the protests against the military mobilization announced by Putin | International

War in Ukraine: From the trenches to the rear, all the faces of a war | Catalonia
June 2, 2022

War in Ukraine: From the trenches to the rear, all the faces of a war | Catalonia

Elizabeth II and her 14 US presidents: a special relationship | International
3 weeks ago

The New York prosecutor summons Donald Trump and two of his children to testify on July 15 | International
June 9, 2022

US and China try to smooth things over Taiwan | International