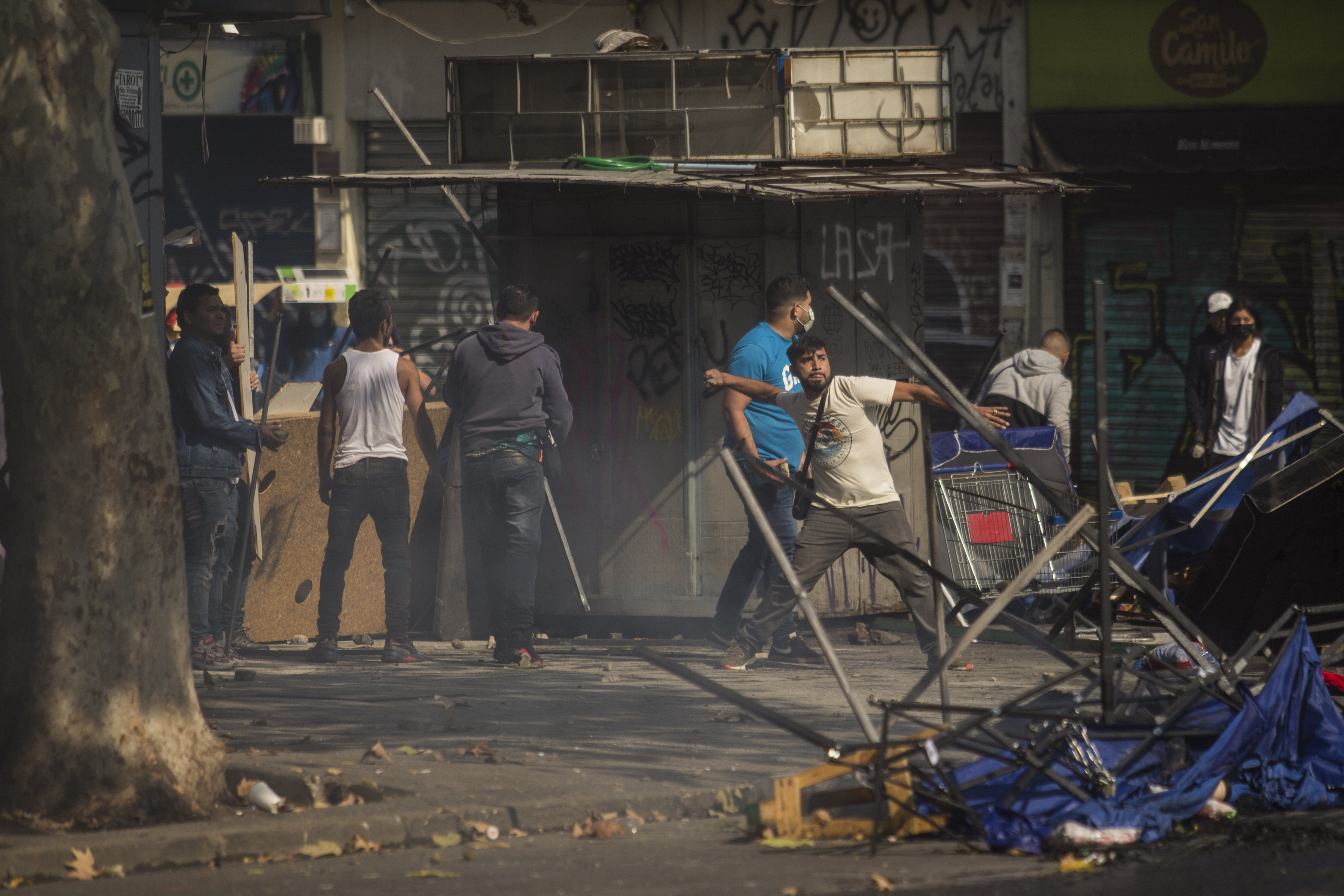 It has been two years since workers marched in Chile on May 1, as a result of the pandemic, but the return to the streets has been very complex. While the main multi-union, the Central Unitaria de Trabajadores (CUT), carried out its activities this Sunday in complete normality, an alternative march ended in serious disturbances in a central area of ​​Santiago. Convened by the Central Classista de Trabajadoras y Trabajadores, an alternative organization to the CUT, it ended with clashes between hooded men and Carabineros, looting of a shopping center and other premises, barricades, the launching of Molotov cocktails and a large-scale street fight. In a pitched fight that, presumably, pitted those who were violently demonstrating against the informal merchants of the sector -whose part of their infrastructure was burned-, there were twenty shots fired in broad daylight, which left three wounded. , including an independent journalist who was shot in the face.

It is one more of the violent events that show the complex situation that Chile faces in terms of order and public security. Last week, in an area that used to be safe, full of restaurants and shops – the Isidora Goyenechea sector – a group robbed a clothing store with bullets on an avenue full of people at lunchtime. The Government of Gabriel Boric announced this Sunday that it will sue those responsible for the shooting. The Undersecretary of the Interior, Manuel Monsalve, regretted what happened and assured that these events reopen the discussion on a central issue for the current Chilean Executive: the control and use of weapons.

Later, in statements to National Television, Boric condemned what happened: “As a State, we cannot allow criminal gangs of organized crime to take over the streets of our country.” The president expressed his solidarity with the independent journalist Francisca Sandoval, one of the people shot, with her family and “the four people seriously injured in these incidents.” “From the government we are going to make all the resources available so that the investigation that has to be carried out to not only arrest the guilty, but also to ensure that there is justice, is carried out, to review all the security protocols” , he added.

The shooting took place in a complex sector of Santiago, the Meiggs neighborhood, where there is a lot of formal and itinerant commerce. Although for decades it was a place where families bought safely at good prices and wholesale, today it is taken over by gangs that compete for the rent of spaces for informal vendors. On March 10, for example, a merchant was murdered. At the end of that month, a high school student was attacked by street vendors – vendors without legal permission to do so – in the context of a student demonstration.

The Prosecutor’s Office reported this Sunday of two detainees for the shooting and eight other people arrested for public disorder.

War in Ukraine: Pacts with the devil | Opinion

Video analysis | Who benefits from a long war in Ukraine? | Videos

Rodrigo Chaves takes command in Costa Rica with the promise of a “historic change” | International
May 9, 2022

Chile Supports Winter Bond: Boric announces aid of 120 dollars for 7.5 million people in the midst of the inflationary crisis
July 12, 2022

Chile Supports Winter Bond: Boric announces aid of 120 dollars for 7.5 million people in the midst of the inflationary crisis

Japan: The shooting death of Shinzo Abe shocks a country unaccustomed to the use of weapons | International
July 9, 2022

Japan: The shooting death of Shinzo Abe shocks a country unaccustomed to the use of weapons | International

Biden and his European allies are skeptical of Russia’s promise to reduce its military activity in Ukraine | International
March 29, 2022

Donald Trump savors his revenge against the Republicans who supported the ‘impeachment’ | International
August 15, 2022

Juan Orlando Hernández pleads “not guilty” in his first hearing before a judge in the United States | International
May 11, 2022