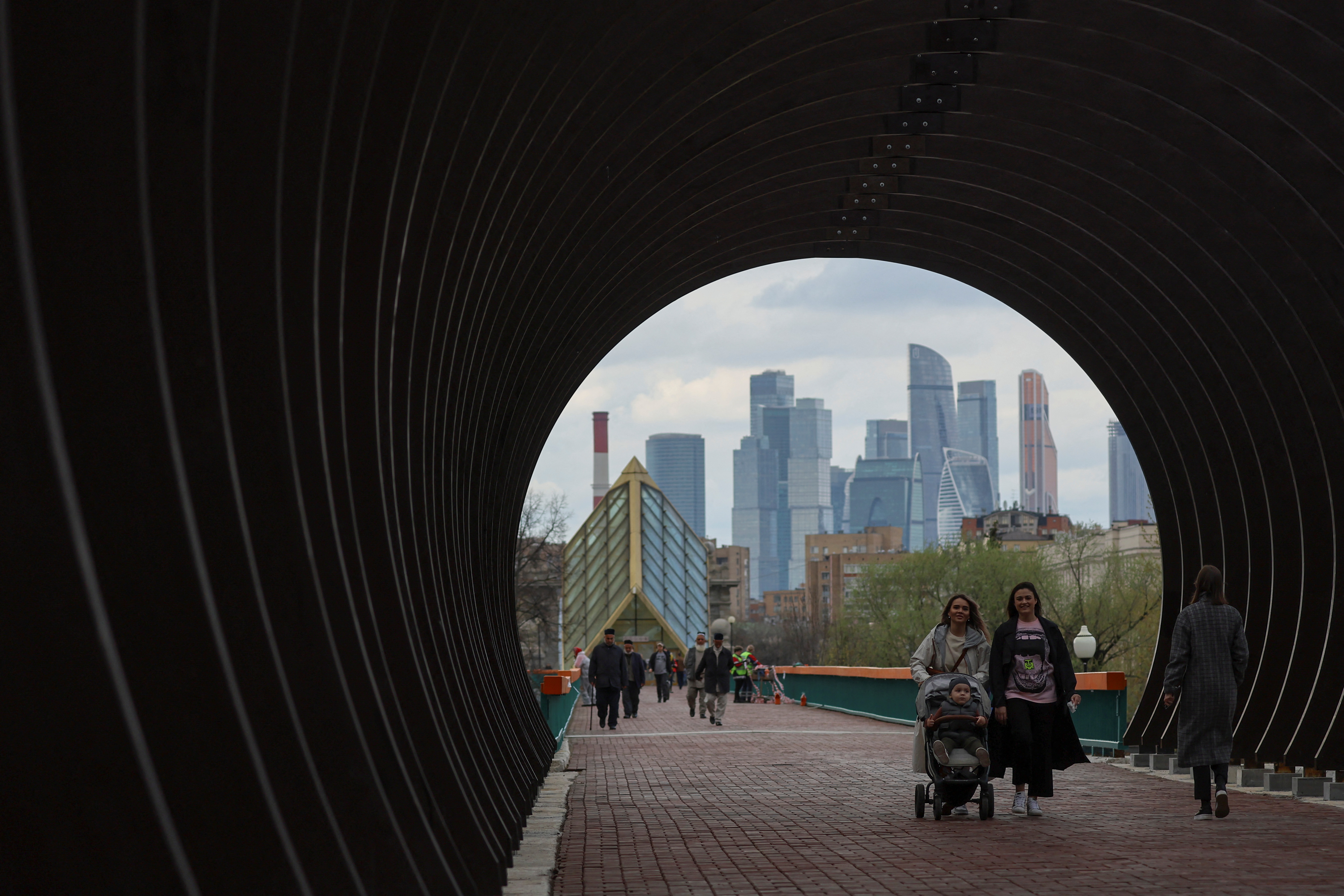 The head of the Accounts Chamber of the Russian Parliament, former minister Alexei Kudrin, warned his citizens on April 27 that the country is heading for a crisis “greater than that of 2009, greater than that of the pandemic.” “We are going to live in a very difficult situation for almost a year and a half or two years. It is very important that we analyze our strengths and resources,” he said in the first person plural. A day later, he revealed on his Telegram channel that he had traveled to Israel, in the first person singular, to receive medical treatment. His trip comes as the authorities try to solve the enormous difficulties in supplying pharmacies with medicines, whose prices have skyrocketed and are prohibitive for the average pocket.

“Friends! I want to stop the rumors before they appear. I will be back in Israel for some scheduled medical appointments,” Kudrin said on his Telegram channel on April 28. The politician was seen in an Israeli hotel and it is possible that he spread this message for fear of being accused of fleeing the country, given the precedent of Anatoli Chubais, another historical figure in the Kremlin circle who publicly criticized the Russian offensive in Ukraine. Chubais, known as the father of post-Soviet privatizations, resigned at the end of March as Moscow’s representative to the UN on climate change and fled to Turkey.

Kudrin was Russia’s economy minister during the boom of the first decade of the century, fueling his popularity, but in 2011 he was relegated to the background after refusing to join a new government led by Dmitry Medvedev. Now, more than a decade later, Kudrin is responsible for overseeing Russian accounts, and he predicts the economic collapse will force the government to take painful action. “The crisis forces us to review our social policies,” he warned hours before leaving the country.

Meanwhile, the head of the Russian health supervisory agency, Alla Samoilova, tried to iron out the shortage of basic medicines suffered by the conflict. “In March there was a boom in demand from patients who take drugs continuously, but today we already see that almost all of these drugs are available in almost all regions,” she said.

Fear of sanctions caused shortages in many pharmacies in March. A survey carried out in March by the Russian Medical community among 3,317 specialists revealed that it was very difficult to obtain more than 80 preparations such as antiepileptics, antidepressants, treatments for oncological and cardiovascular diseases, and medicines for diabetes, arthritis, asthma and thyroid glands.

The authorities insist that the supply of drugs is stable, although they admit some problems. “A short-term temporary shortage of some medicines is possible due to the search for new logistics routes and delays in the passage of goods through our borders,” the health agency explained. “Not a single foreign pharmaceutical company has announced the cancellation of its drug supply to Russia,” she added.

Another problem stems from the failure to replace foreign medical equipment with domestic production. The Russian government set a target for Russian medical devices to account for 40% of the total by 2020. However, the National Ratings Agency estimated that only a 29% share was reached in 2020. And the daily Kommersant has reduced the figure even further, to 25%.

The health industry has not been formally sanctioned, but the devaluation of the ruble and the logistical problems caused by the sanctions have driven up the cost of medical care and make it even more difficult to manage hospitals. “We don’t know when it can be fixed in the current situation,” they told a breast cancer patient who found that one of the center’s two oncology machines had broken down.

In addition, although Pfizer, Bayern, Sanofi, Novartis and other multinationals have promised that they will continue to ship their vital medicines for humanitarian reasons, they will stop supplying other non-essential health products and will withdraw investment from production centers and clinical trials due to the problems of the Russian economic situation.

One of the first scares with the supply of basic medicines took place with L-Thyroxine, an essential treatment for people suffering from hypothyroidism, which is imported from the German companies Merck and Berlin-Chemie. Fear of being left without him by sanctions left pharmacies empty for weeks in regions like Krasnodar and Sverdlovsk.

Little by little the supply is being restored in the provinces. In the capital of Sverdlovsk, Yekaterinburg, it can only be found in one of the city’s 32 pharmacies that are part of the Planeta Salud network, one of the largest in the country. And in Perm, in just a dozen of its 392 establishments. The Russian Ministry of Health issued a certificate in early April for the local company Obnovleniye to produce the drug from now on.

Insulin has also been affected by the crisis. Although there were no problems for patients receiving the Russian-made preparations from the state, their price has skyrocketed by around 30% in pharmacies.

The biggest problem is found in services considered non-essential, where prices have become prohibitive. Russian dentists import more than 90% of the materials and equipment they use from the West. Until now they have been able to hold out with what they had in storage, but it is enough to take a look at the websites of suppliers such as Aveldent to verify that the prices are now through the roof. For example, a pack of 100 Ultracain anesthetic capsules is worth 12,645 rubles when before the conflict it was around 6,000, an increase of around 100% in price, while the Ceram-x filler material has risen from 1,900 to 2,741 rubles. , 44% more. With an average monthly salary of 57,344 rubles in February, according to the Rosstat statistics agency, these are sky-high prices.

Johnson & Johnson’s Acuvue lenses account for more than half of the Russian market. The American multinational announced in March that it was suspending the supply of its personal hygiene products and for a time it was difficult to find contact lenses due to hoarding due to fear of shortages. The company later had to clarify that it would continue to send contact lenses to the country, as they were considered medical devices. The question is at what prices. The six-pack of Acuvue Oasys lenses, which in some stores cost 1,046 rubles before the conflict, now cost 2,190 rubles. Or 1,850 rubles if ordered from Ozon, the Russian equivalent of Amazon.

Another sector affected by the costs derived from the sanctions is plastic surgery. High prices harm people who require these services after an operation or for having suffered some disfigurement. But in addition, it also increases the risk to health, due to the aesthetic touch-ups that are made with material of suspect quality.

The North American firm Abbvie has stopped supplying its flagship product, Botox, as well as its intradermal implants, as have many other companies in Europe and Asia. Thus, cosmetic touch-ups such as breast augmentation, which was previously between 250,000 and 300,000 rubles, has shot up to half a million in some regions. Russian doctors warn that these costs could fuel a market for fake implants that threatens the health of those who cannot afford such operations at home or in foreign clinics.

Taiwan: Nancy Pelosi, the Democratic leader who imposes her agenda on Biden | International

Elizabeth II, under medical supervision at her Balmoral residence | International
3 weeks ago

Elizabeth II, under medical supervision at her Balmoral residence | International

The US announces that it will give military aid to Ukraine “until the end” and starts a greater commitment to another 20 countries | International
May 23, 2022

A plane with 22 passengers disappears in Nepal | International
May 29, 2022

A plane with 22 passengers disappears in Nepal | International

Peru: A Peruvian prosecutor investigates President Pedro Castillo for plagiarism in his master’s thesis | International
May 6, 2022

The trump cards of kyiv and Moscow for a prisoner exchange: a Putin ally for two foreign fighters | International
April 18, 2022

The trump cards of kyiv and Moscow for a prisoner exchange: a Putin ally for two foreign fighters | International

Ukraine: Queues and usury: the difficulties of the Ukrainians to change money in Poland | International
March 18, 2022

Ukraine: Queues and usury: the difficulties of the Ukrainians to change money in Poland | International

War in Ukraine: Cold-blooded shooting and looting by the Russians at the gates of kyiv | International
March 29, 2022

War in Ukraine: Cold-blooded shooting and looting by the Russians at the gates of kyiv | International