the ukrainian flag is interpreted as a symbol of blue skies over golden fields of wheat. Seven out of ten hectares of the country are farmland. In Spain there are five, and in the whole of the European Union, four.

Before the war, agriculture was the 10% of gross domestic product of the country —compared to 2% in Spain— and employed 14% of its active population. The importance of the sector is also reflected in its exports: half of the corn and 30% of the wheat that the EU imports comes from this country. But the war has stopped everything: the Russian invasion has put this year’s harvest and the following ones at risk.

According to estimates According to the FAO (Food and Agriculture Organization of the United Nations), up to 30% of the land dedicated to the cultivation of cereals, corn and sunflowers could not be planted or harvested during this season. In addition, the cost of direct damage to agricultural assets, amounts to 6,400 million dollars, almost half of what the sector produces in a year.

Agricultural infrastructure has also become a military target, and the European Sentinel-2 satellites have witnessed this. In the following image, from March 21, more than 20 fires can be seen devouring the farms that surround the road that leads to kyiv from the east. This road was one of the main supply arteries for the Russian troops who were then trying to take the capital. 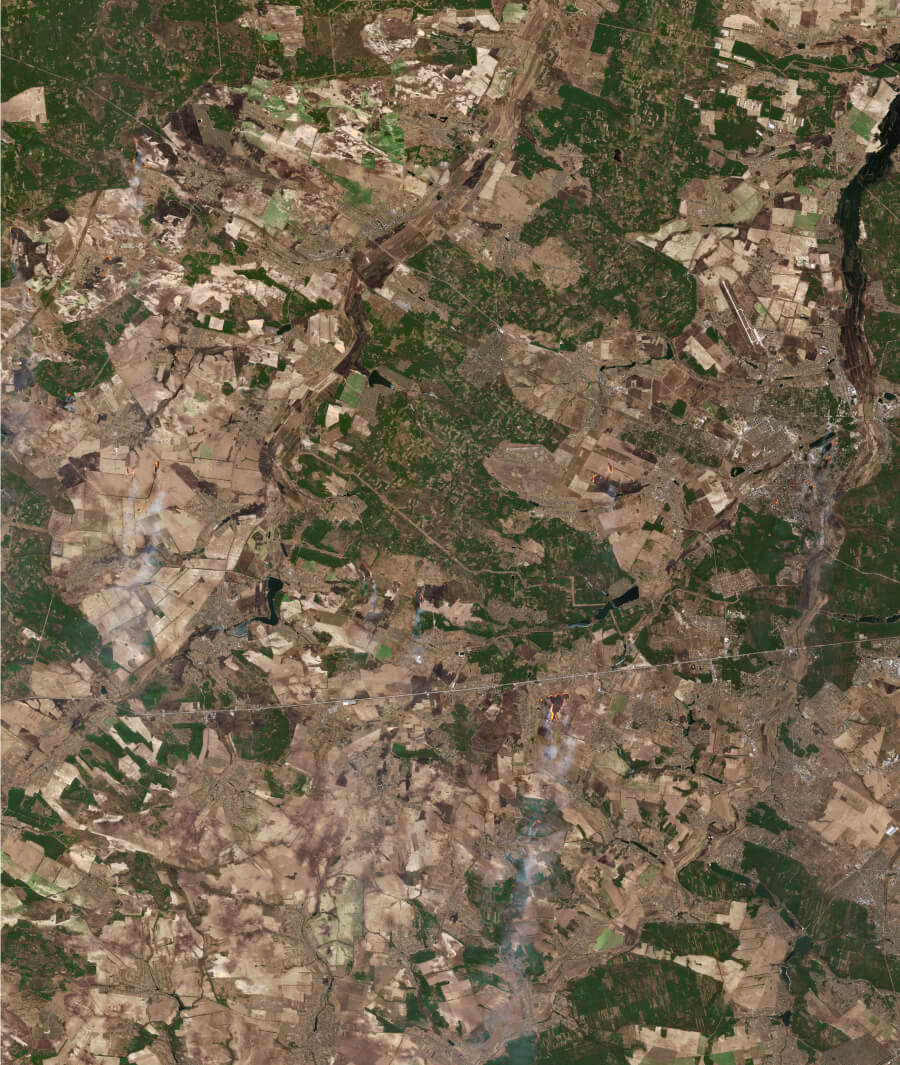 This image is not a photograph but a composite created from several bands from ESA’s Sentinel 2 satellite to analyze the fires.

At the end of March, the United States Government denounced that the Russian Army was launching attacks aimed at grain storage warehouses. “Russia’s reckless damage to these grain silos is a stark example of how Putin’s war affects civilians in Ukraine and threatens food security around the world,” a US government spokesman said.

The losses identified so far by the FAO include theft and destruction of agricultural machinery (tractors, harvesters, trucks…), loss of livestock due to bombing and damage to silos, warehouses, cargo ships, processing plants, seed crushers, mills and even agricultural research facilities. 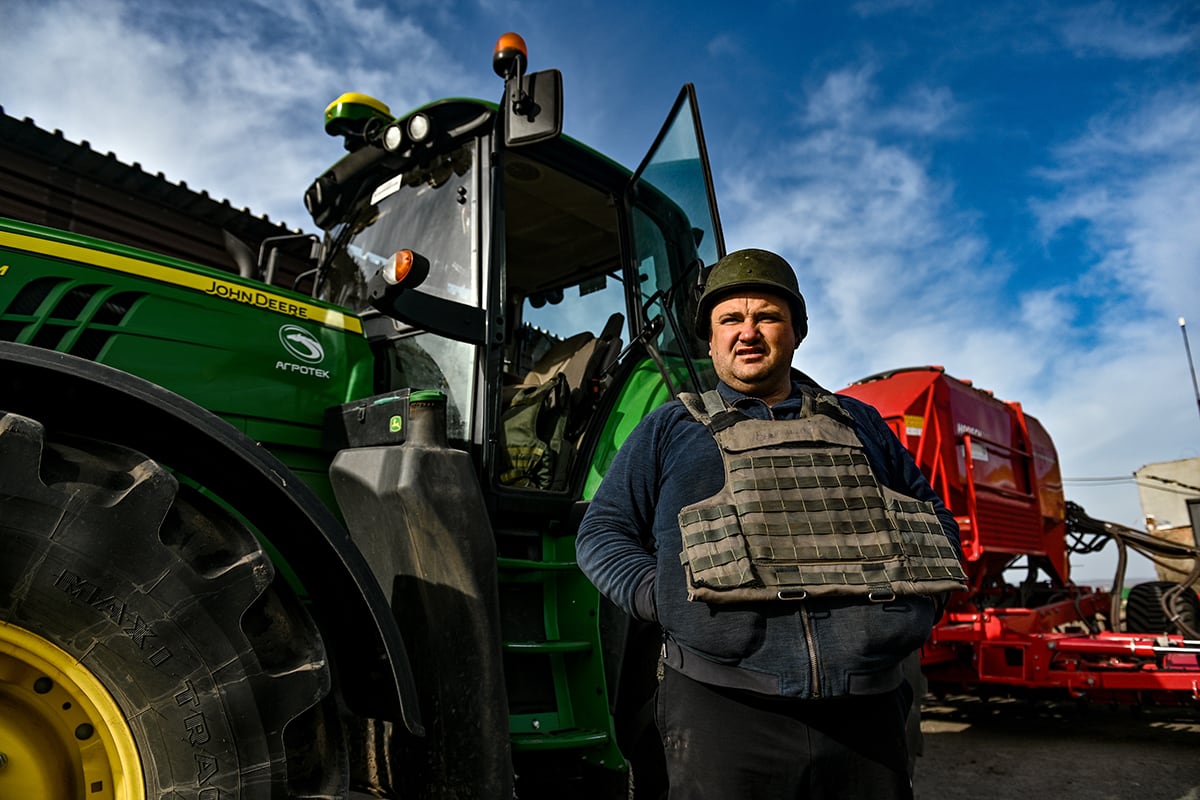 A farmer with a bulletproof vest plants 30 kilometers from the front, in Zaporizhia. Dmytro Smoliyenko/Ukrinform/Future Publishing. 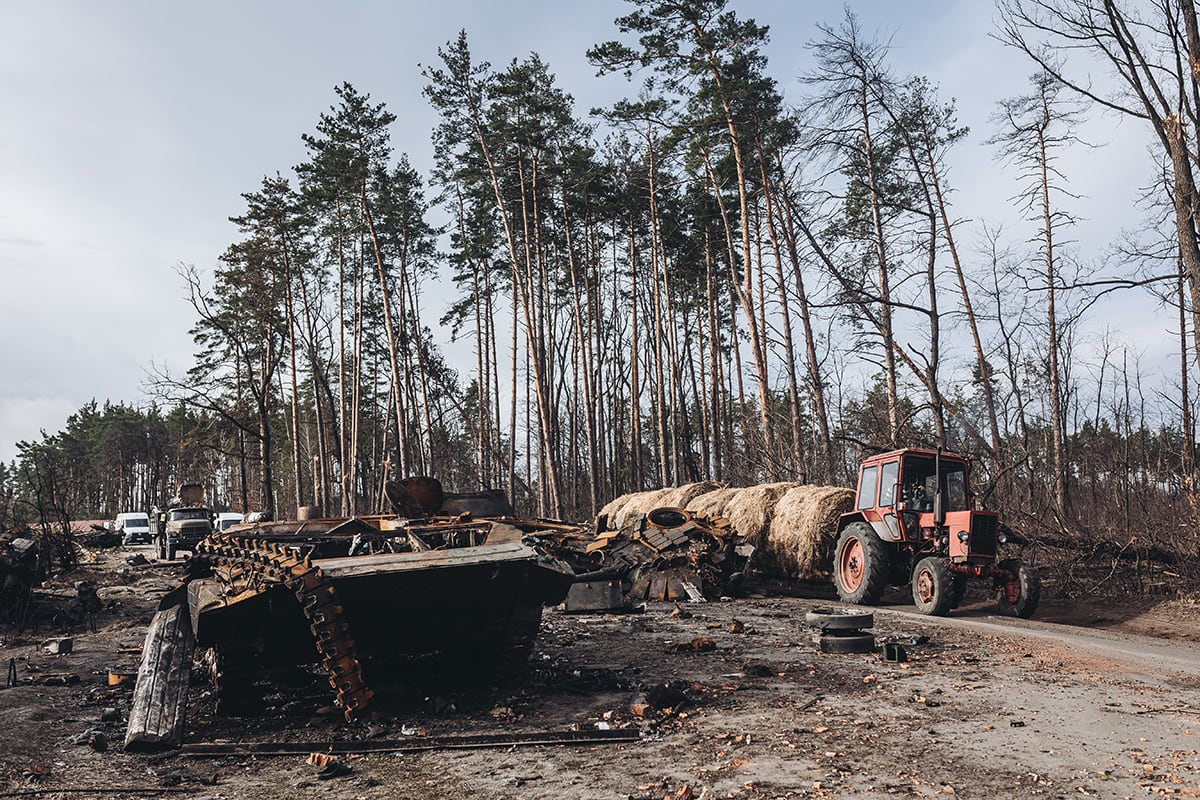 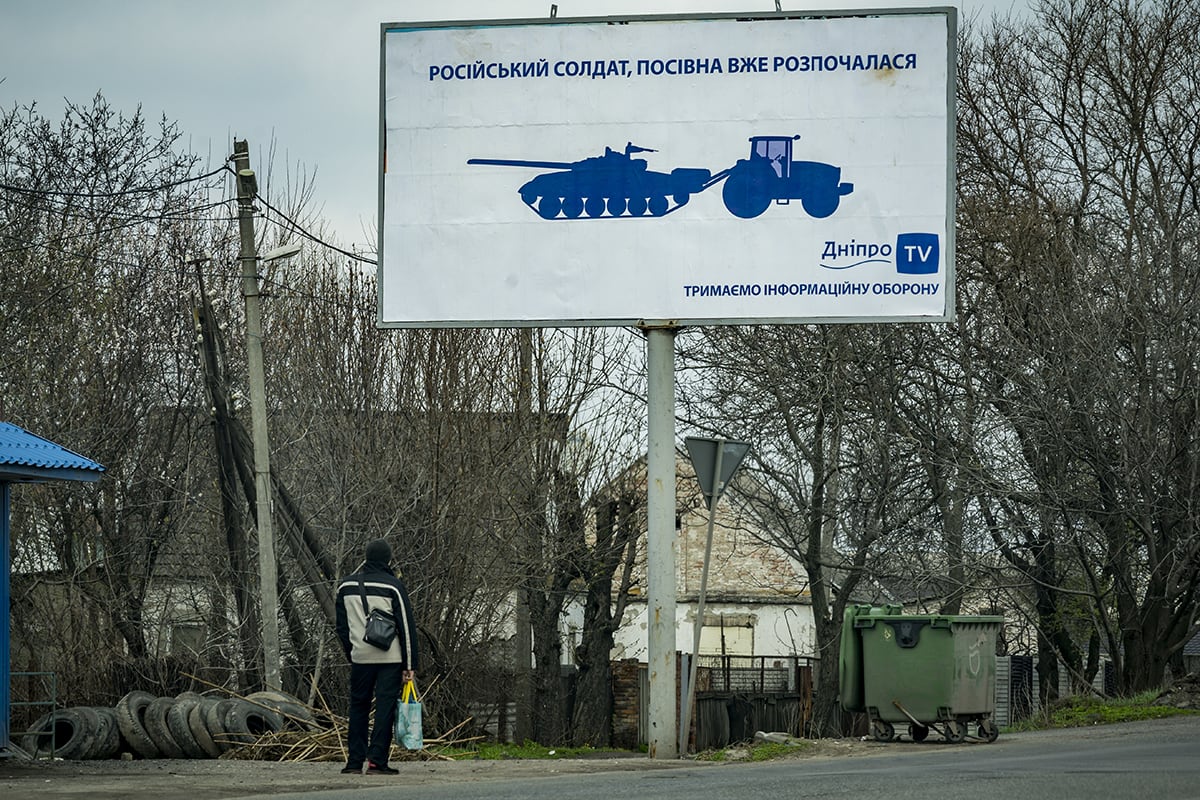 A sign on the Dnipro reads: “Russian soldier, the planting campaign has begun” Celestino Arce/NurPhoto. 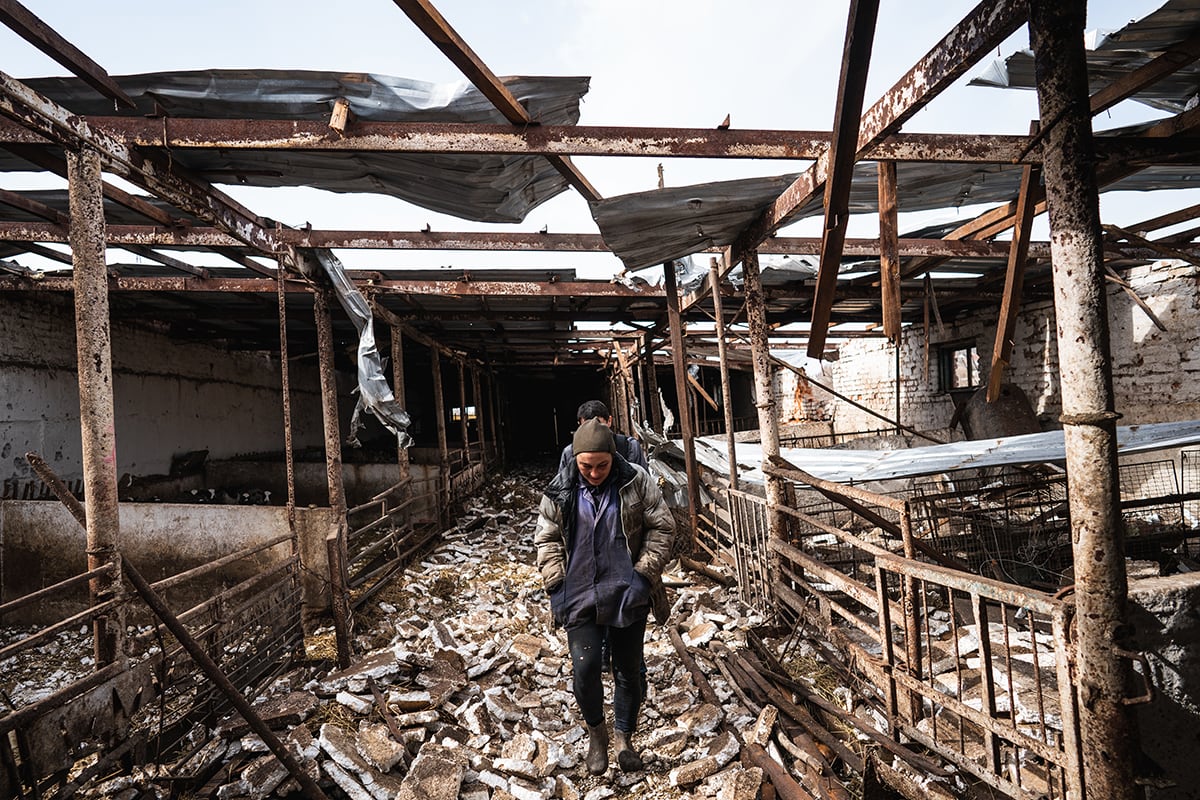 Two workers walk through a farm destroyed after the fighting in Kharkov. Wolfgang Schwan/Anadolu Agency

The conflict has hit the main agricultural areas of Ukraine. In Sumi and Chernihiv, where Kremlin forces were deployed until the end of March, cornfields cover 15% of the territory.

The fighting has also reached the wheat fields that stand out in the south, in regions such as Zaporizhia, where the largest nuclear power plant in the country came under the control of the invading forces. In Donbas, where the efforts of the Russians are now concentrated, the cultivation of wheat and sunflowers represents 30% of the total area.

With no end to the conflict in sight, it is impossible to estimate the true extent of the damage or how long it will take for the country to recover lost ground, explains agrarian policy expert Petra Berkhout: “It depends on how much production capacity has been destroyed in Ukraine or even the available labor or transport capacity through its ports and railways. It’s very difficult to predict.”

According to Ukrainian Minister of Agriculturemore than a million tons of grain and seeds are now trapped in the ports of the country, which has gone from exporting 6 million tons of these products every month to only 200,000 tons in March.

“The main concern at the moment is the lack of storage space for the 2022 harvest,” Jakob Kern, coordinator of the World Food Program in Ukraine, warned last week. Before the war, the country had some 1,133 silos, according to the OpenStreetMaps collaborative project. They are not so many compared to the 2,010 that Spain has, but they were enough to store the little grain that remained in the country, which exports 70% of its production. In the coming months, 15 million tons of grain could deteriorate outside the silos.

“Ukraine was our barn. In addition, it was already producing according to the needs of the European Union: very respectful of the environment, pesticides, insecticides…”, laments Román Santalla, a cattle farmer in Lalín (Orense) and Secretary of Livestock of the Union of Small Farmers and Ranchers. The blockade of Ukrainian exports forces them to go to markets with other standards in search of corn, essential for feeding pigs and poultry.

Between August 2020 and July 2021, around 10 million tons of sunflower were harvested in the countries of the European Union. To supplement demand, seeds, oils and derivatives worth an equivalent of 5.2 million tonnes were imported, most of it from Ukraine. Something similar happens with rapeseed: about 10% of what is produced and imported is Ukrainian, corn (8%) or peas (5%).

This dependency is not the same for countries. In Spain, 34% of all sunflowers come from the Ukraine. Also 20% of corn, 18% of peas or 14% of rapeseed and its derivatives. In other countries the importance of some Ukrainian products is even greater. In Poland, their sunflower represents 90% of the total, they import almost half a million tons from the neighboring country. In the Netherlands it is 75%, in Portugal 48% and in Italy 42%.

In addition, the situation is complicated outside Europe, explains Berkhout, not so much because of the availability of cereals and seeds as because of the resources needed to access them: “There are countries in North Africa and others, such as Bangladesh, that are very dependent on of Ukrainian exports. In addition, the World Food Program [que distribuye alimentos a proyectos de desarrollo, refugiados de larga duración y personas desplazadas] gets a lot of cereal from there. These countries have a problem. Of course, they can buy another cereal, but it is more expensive.” British intelligence warned this week that the reduction in Ukrainian grain supplies will generate inflationary pressures that will raise the price of these products around the world.

Mariano García Calatayud: The Spaniard whose detention in Ukraine by Russian troops was being investigated by the Foreign Ministry is released | International

Chile 2022 plebiscite results, live | Boric prepares a change of cabinet to renew the management after the triumph of the rejection
4 weeks ago

Chile 2022 plebiscite results, live | Boric prepares a change of cabinet to renew the management after the triumph of the rejection

Russia plans to buy ammunition from North Korea for use in Ukraine, US says | International
4 weeks ago

Russia plans to buy ammunition from North Korea for use in Ukraine, US says | International

The Petro Government presents the tax reform on its first day
August 8, 2022

The Petro Government presents the tax reform on its first day

Volodymyr Zelensky: The President of Ukraine addresses the Canadian Parliament by videoconference | International

Italy Elections: Letta resigns as Social Democratic leader after criticism of her strategy of not agreeing with the 5 Star Movement | International
6 days ago

Italy Elections: Letta resigns as Social Democratic leader after criticism of her strategy of not agreeing with the 5 Star Movement | International

Last minute of the war in Ukraine, live | A chain of explosions destroys an arms depot in Crimea | International
August 16, 2022

Last minute of the war in Ukraine, live | A chain of explosions destroys an arms depot in Crimea | International