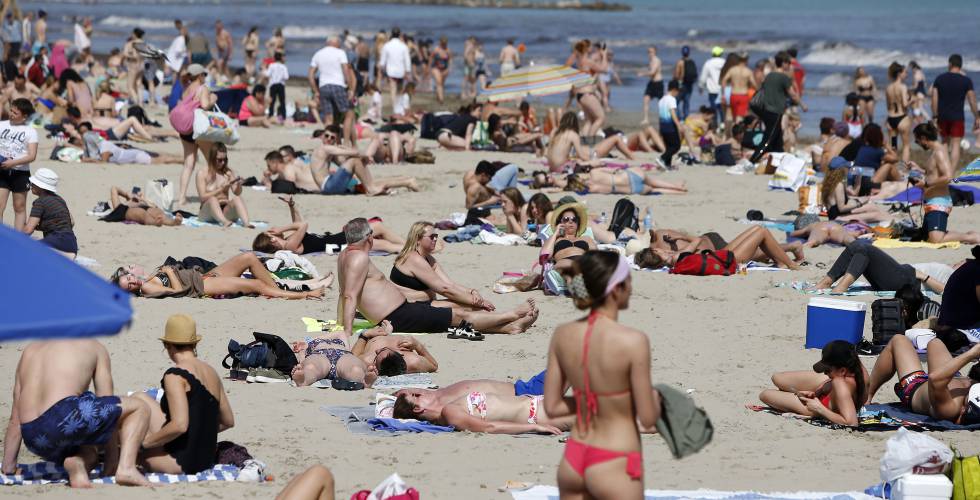 The recovery of tourism and the return to pre-pandemic levels have been launched at Easter. Hotels, airlines, cruises and travel agencies make a very positive assessment of a summer period, traditionally reserved for national tourism, and predict that this year’s high season can be historic for how long it can be, as it could last up to six months (from May to October) by virtue of the reservations of the big hotels. Hotels, bars, restaurants and transport have recovered all their staff (tourism already employed 2.4 million workers in March, above 2019) to respond to a demand that could reach its peak in July and August.

This is the case of the hotel company NH, with 92 hotels in Spain, which foresees a great summer after a good Easter, despite the fact that its hotels are integrated into the cities and have been the most affected by the pandemic compared to vacationers due to the absence of business tourists. “Comparing reservations with the same advance notice, in the Southern Europe business unit as a whole, the occupancy levels for July and August are triple compared to 2021 and very similar to those of 2019, only one and a half points below. Although there are already certain destinations such as Barcelona, ​​Marseille, the Algarve, Malaga, Marbella, Cartagena or A Coruña where this year’s reservations already exceed those of 2019”, they emphasize from the company owned by the Thai Minor.

The Balearic chain Riu registered an occupancy rate of 90% in its hotels in Fuerteventura at Easter, while establishments in Andalusia and Madrid were almost full, with 99% of places occupied, followed by Mallorca, Las Palmas or Tenerife, with 98%. “The forecasts are good, with a level of reservations and prices that is already slightly higher than what we had at these same dates in 2019,” they emphasize. By markets it stands out the good behavior of the United Kingdom and the Netherlands, already 30% above pre-crisis levels, followed by the national and Belgian markets. On the other side is Germany, the great issuer of travelers from RIU hotels, with a much slower pace. “We trust that it will recover in the short term as it did in April.”

At Meliá they consider that the desire to travel is outweighing the risks of the current situation, such as the war in Ukraine or the rise in inflation. “The daily issuance of reserves exceeds that of 2019 on the same date. Not yet accumulated, but if this rate continues we hope to soon exceed the reserves and the occupancy reached in the summer of 2019”. The first Spanish hotel company foresees a positive summer season without last minute offers, “because customers prefer to book now and secure places due to high demand.” This good season will allow it to maintain margins despite the general rise in many costs.

Ryanair and Jet2.com are also optimistic. Both have reinforced air capacity for the summer to Spain. For the Canary Islands alone, the British tour operator has reserved 1.2 million seats, 30% more than pre-crisis levels. For its part, the Irish airline plans to transfer 50 million passengers to Spain this summer, a record figure motivated by the high level of vaccination and the restrictions on long-haul flights.

The data you handle Cruise Lines International Association (CLIA) They point out that both the capacity and the scales planned in Spain will approach the pre-pandemic figures at the end of the year. “The slower recovery of travel in Asia and the sanctions on Saint Petersburg, one of the key destinations in the Baltic Sea, anticipate that the Mediterranean will be overweight.” Alfredo Serrano, director of Clia in Spain. A good example is the Italian-Swiss giant MSC Cruises, which plans to make 414 stopovers in Spanish ports, 2% more than in 2019, of which 311 will be made in summer.

Travel agency. Destinia, with a forecast turnover of 200 million euros for this year, highlights that Easter ended with sales only 3% below the same period in 2019. A very positive result despite the war context in Ukraine and the rebound in inflation touching 10%. “They announced the good weather and people began to book as in the old days and that prices were 13% more expensive on average”, they emphasize. Compared to other exercises, the big difference is that practically the vast majority of reservations are last minute. “The week before Easter we sold 98% more than in the same week in 2019. Seeing this trend, we expect a great summer as well.”

Tourist flats. The Spanish Federation of Tourist Housing (Fevitur) recognizes an average occupancy of 75% at Easter. “The trend that began during the pandemic of seeking territories with a lower occupation and nature load has come to stay,” emphasizes Tolo Gomila, president of Fevitur. Despite this, he emphasizes the negative impact that the war in Ukraine and the rise in inflation have had for the summer, “with 10% cancellations.”

End of the grace period of the labor reform: the primacy of the fixed contract enters into force | Economy

Inflation accelerates in July to 10.8%, a maximum of 38 years, in full tourist season | Economy

Peru: A judge orders two and a half years of preventive detention for Pedro Castillo’s sister-in-law | International
August 29, 2022

Peru: A judge orders two and a half years of preventive detention for Pedro Castillo’s sister-in-law | International

United Nations and Amnesty International document massacres and rapes that occurred when Russian troops tried to reach kyiv | International
May 6, 2022

Twist in the controversy between Tamara Falc and igo Onieva, Marina Theiss speaks clearly: “I am not the woman in the video”
4 days ago

Prohibit the issuance of visas to Russians: a sanction that is not without cost | International
August 11, 2022

Prohibit the issuance of visas to Russians: a sanction that is not without cost | International

Mario Draghi, the man who wanted to tame the beast | International
July 21, 2022

Mario Draghi, the man who wanted to tame the beast | International

Meghan and Harry’s latest scandal: involved in supporting a charity with minors
3 days ago

Meghan and Harry’s latest scandal: involved in supporting a charity with minors

The last Ukrainian strongholds in Donbas await the invader | International