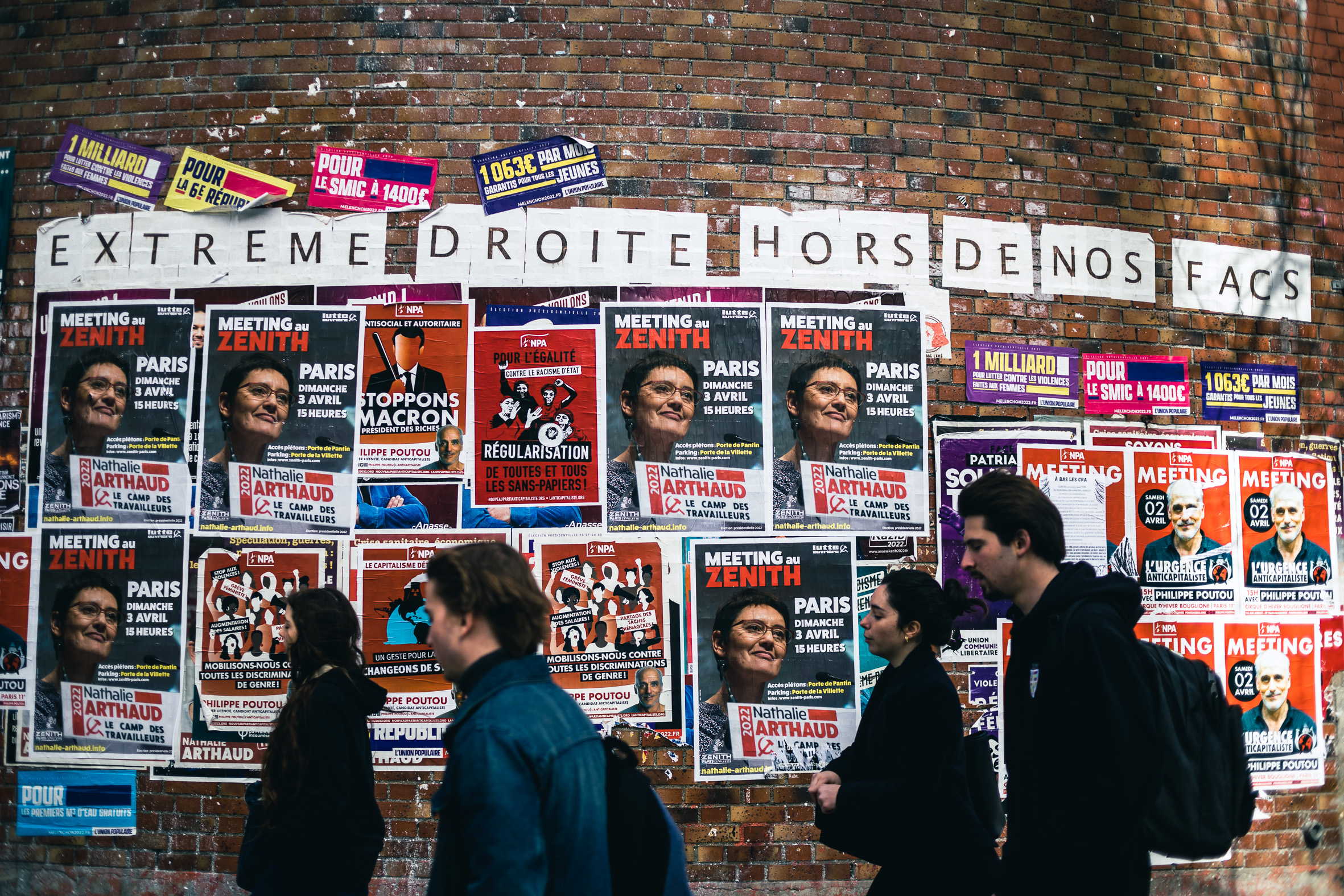 They do not hesitate to put themselves at the forefront of the protests to denounce the lack of action against climate change or to demand better social conditions, the defense of rights and freedoms. But when it comes to voting, young people in France are the great absentees. The ballot boxes, election after election, get a little emptier without your votes. The latest polls warn that next Sunday in the presidential elections abstention could reach 30% and shoot up to 40% among those under 35 years old.

The alarms began to sound in the regional elections of June 2021, where the abstention of young people rose to 87% (66.7% of the census did not vote). Despite the fact that the presidential elections usually have a greater participation than other calls, on the eve of the new appointment no study has dispelled the fear of a strong absence of this sector of the population when electing the next president -or president- of France.

Young people are a crucial voting niche for the two candidates who are fighting to qualify for the second round together with Emmanuel Macron: the far-right leader Marine Le Pen (National Regroupment) and, increasingly closer, the leftist Jean-Luc Mélenchon (Rebellious France). Although he is the great favorite, President Macron has also called for the mobilization of the electorate in a country where no one should take anything for granted. There is history to remember what is at stake, because in April 2022 it will be 20 years since a strong abstention in the first presidential round facilitated what was hitherto unthinkable: that the far-right candidate, Jean-Marie Le Pen, father of today’s ultra presidential candidate, will qualify for the second round after defeating the socialist and favorite Lionel Jospin.

Why don’t the new generations vote? Does France suffer from a senior democracy, as some specialists describe it, in which only issues that interest the elderly are addressed because only they vote? Has the format of parties and five-year elections stopped working or is it that they do not feel challenged by the candidates and their programs? The answer contains a bit of all this, a mixture of dysfunctions, which has created what an exhaustive study by the Montaigne Institute describes as “strong lack of political affiliation” of young people. They “do not recognize themselves in any political tendency, whether due to ignorance, lack of interest or rejection,” the report explains.

“Ah, but is it already this Sunday?” Lala, a mathematics and computer science student at the Tolbiac University in Paris, has been taken by surprise by the imminence of the presidential elections. It’s not like she’s spent much time thinking about it, either. “I’m not very interested in them”, she admits at the end of class in the same week as the first round, this Sunday. After reflecting for a moment, this 20-year-old woman says that she may be going to vote, although when she begins to make the list, she does not take long to rule out candidates until she realizes that she does not have any that truly convinces her.

Esther, a 20-year-old history student, waits for her university classmates at the door with pamphlets from the far-left candidate Nathalie Artaud. Although she admits that neither her own party believes in a victory (she has less than 1% intention to vote), Esther tries to convince the students to go to the polls on Sunday. “Voting is useless to change anything, but elections are the only time we can express ourselves, so we have to take advantage of it,” she reasons. A young man who is stopped and places a pamphlet in his hand admits that he has not even considered going to vote. He is not the first to respond like this, nor will he be the last, the young woman sighs. “There is a loss of confidence and they are right”, explains Esther who, despite everything, continues trying to convince potential voters.

Daniel Guatoluña is interested in politics. This 26-year-old Parisian bookseller, who arrived almost as a baby from Ecuador, recently participated in a debate on youth and elections during the presentation of one of the many studies that reveal the growing distancing of the new generations from the polls. But he had not yet decided whether he would vote or not, just like, he says, many of his friends, who do not see themselves represented in the candidates who will fight this Sunday for qualification for the second round of the presidential elections. .

For Guatoluña, as for so many other young people, “there is a problem of representation, but above all of discourse, which is not in line with young people,” he explained during the presentation of another Ipsos survey for the Federation of General Student Associations (Fage) in Paris revealing that more than one in two young people (57%) consider that their concerns have not been taken into account in this campaign, and that 66% of political leaders do not care enough about the new generations.

“It is false to say that young people are not interested in politics,” says Fage president Paul Mayaux, 23. “The problem is that they do not feel heard or taken into account in the public debate,” he points out. There are issues, such as purchasing power, that do interest young people, and a lot, like the rest of the French. “But when politicians talk about this, they refer, for example, to inheritance rights, something that is not the concern of young people,” says Etienne Mercier, director of the Ipsos opinion service. There is a “thematic disconnect”.

It’s what Lala feels. The university student is going to have to stop her studies for a year and start working, because the scholarship she has does not allow her to pay for her stay in Paris. She considers that none of the candidates really cares about the issues that concern her and her colleagues, such as “student precariousness”, especially after the pandemic.

There are numerous attempts to attract the young vote, especially through social networks. Two twentysomethings, Grégorie Cazcarra and François Mari, have created Elyze, an application that plays with the Tinder format to introduce candidates to the Elysee and analyze, in the style of the dating platform, if a voter is “compatible” with a candidate or candidate and their programmatic proposals. “We wanted to reconcile our generation with the presidential elections,” Cazcarra explained to Le Monde. But as in love, in real politics things don’t always go as expected; and Sunday’s appointment remains a great unknown.

On April 21, 2002, the weather was fine. Two days earlier the Easter holidays had begun. Why waste a day like this going to vote if the polls were for sure a second round between the conservative Jacques Chirac and the favorite of those elections, the socialist Lionel Jospin? They would go to vote in the final, many French people said to themselves. Abstention on that first election day broke all records in France’s recent history: 28.4%. Jospin was defeated, the far-right candidate Jean-Marie Le Pen —father of today’s ultra-candidate Marine Le-Pen, who is fighting for second place behind Emmanuel Macron— managed to qualify for the second round for the first time and the French from leftists were forced to vote for the conservative Chirac to prevent the ultimate victory of the ultra candidate. Almost exactly 20 years after the French were forced to activate the republican front for the first time – to vote en masse for the rival of a National Front candidate so that he does not win – something that has since been activated on numerous occasions, abstention could reach or even exceed 30%. With the difference that the margins now between the rivals are much narrower.

Russia: The G-7 warns that it “will never recognize” the borders that Putin wants to impose by force | International

Patrick Lyoya: The video of the murder that reignites the debate on racism and police brutality in the US | International
April 15, 2022

Patrick Lyoya: The video of the murder that reignites the debate on racism and police brutality in the US | International

The heritage to be shared between Laura Escanes and Risto Mejide: three houses, a company and a successful project
1 day ago

Poverty and inflation feed the new outbreak of Ecuador | International

Dmitro Orlov: The Ukrainian mayor who fights from exile for the residents of the Zaporizhia nuclear power plant | International
2 weeks ago

Dmitro Orlov: The Ukrainian mayor who fights from exile for the residents of the Zaporizhia nuclear power plant | International

The helplessness of Ukrainian refugees in Russia: no help, no work, no rent | International
July 11, 2022

The helplessness of Ukrainian refugees in Russia: no help, no work, no rent | International

Russia blames the Ukrainian secret services for the murder of the daughter of Dugin, an ideologue of the Kremlin | International
August 22, 2022

Russia blames the Ukrainian secret services for the murder of the daughter of Dugin, an ideologue of the Kremlin | International

The tragic flight to nowhere of a prisoner with his jailer in the US | International
May 10, 2022

Trump lashes out at Biden, the FBI and the media at his first post-registration rally | International
4 weeks ago

Trump lashes out at Biden, the FBI and the media at his first post-registration rally | International

The photos recovered from the Malvinas war
June 15, 2022

The photos recovered from the Malvinas war

Diego Molano: the time of the minister before the Colombian Congress for the military operation in Putumayo | International
April 26, 2022

Diego Molano: the time of the minister before the Colombian Congress for the military operation in Putumayo | International