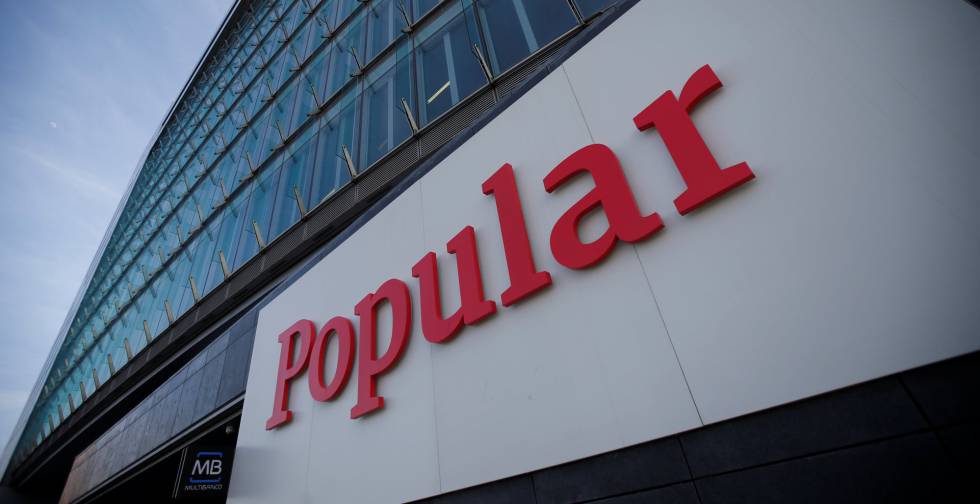 The National Court has confirmed the fines of the National Securities Market Commission (CNMV) to several former directors of Banco Popular. The sanctions, as a whole, exceeded 1.14 million euros between what corresponded to the entity and seven directors, including former president Ángel Ron. The rulings of the Court that have just been made known are dated March 23 and resolve the appeals of the secretary of the board of directors, Francisco Aparicio (a fine of 25,000 euros), and Luis Herrando, member of the Popular remuneration commission ( €18,000). These are added to those already known about the former CEO, Francisco Gómez, and the European Union of Investments, which had a director in the entity.

The sanction imposed by the CNMV in July 2020 was justified for “omitting data and presenting misleading information” in the annual remuneration reports corresponding to the 2013, 2014 and 2015 financial years. The concealment refers to the pension systems and payments for resolution of the contract of the executive directors. That is, the compensation after leaving the entity. The sentences for all the appeals filed are not yet known, although the Supreme Court makes a similar reading in the cases resolved to date. Therefore, it can be assumed that these arguments will be repeated for all the fined former directors, according to legal sources, since they are very similar circumstances.

“It was not explained in a clear, complete and understandable manner that, in addition to receiving the pension from the time they reached the legal retirement age of 65, the executive directors were also entitled to receive this annual pension from the date of their retirement. cessation as a director and until reaching the legal retirement age and it was also not reported that this contingency was not covered with the contributions made by the bank and, therefore, that there was the possibility of making additional contributions. In fact, the early cessation has generated the need for the bank to have had to make additional contributions of 27.7 million euros, ”says the sentence.

These two sanctions on directors are individual, so Banco Santander, to which Popular was awarded in June 2017 after being intervened by the State, does not have to face the payment. The group chaired by Ana Botín is indeed responsible for the fine of one million euros that was imposed on Popular for this matter, which is also being appealed as Santander understands that as successor it has no relation to this matter.

Those affected by the CNMV’s decision were three executives, who were fined 25,000 euros each: the former president of the Popular Ángel Ron; former CEO Francisco Gómez; and the former secretary of the board of directors Francisco Aparicio. For their part, Luis Herrando and Ana María Molins, in their capacity as directors who are members of the Banco Popular remuneration committee, faced a fine amounting to 18,000 euros each; and Jorge Oroviogoicoechea, in his capacity as director member of the Remuneration Committee, another 16,000 euros. The CNMV also fined Unión Europea de Inversiones, in its capacity as director member of Popular’s remuneration committee on the date of approval of the Annual Report on Directors’ Remuneration for 2013, for an amount of 14,000 euros.

The decision of the market supervisor affects one area, that of the pension savings of the old leadership and compensation, which has already caused lawsuits in the courts. Santander demanded from Ron, with a favorable ruling from the Madrid court, the return of the compensation of 12.8 million that the entity’s statutes provided due to the millionaire losses of Popular in 2016. This is the first time that a court applied the so-called clause evil. The money from that early retirement, which recognized the collection of 1.1 million annually until he turned 65, was outsourced in a Mapfre insurance policy.

The Spain that we take out of the marble | Business

“We are slaves of Uber”: the cost for drivers of an impossible business model | Economy

Heart of Pedro I of Brazil: Bolsonaro gets Portugal to lend him the heart of the emperor who made Brazil independent in 1822 | International
June 25, 2022

Heart of Pedro I of Brazil: Bolsonaro gets Portugal to lend him the heart of the emperor who made Brazil independent in 1822 | International

Draghi backtracks and is willing to continue as Prime Minister of Italy | International
July 20, 2022

Bolsonaro and Lula face each other in the first electoral debate, in pictures
August 29, 2022

Bolsonaro and Lula face each other in the first electoral debate, in pictures