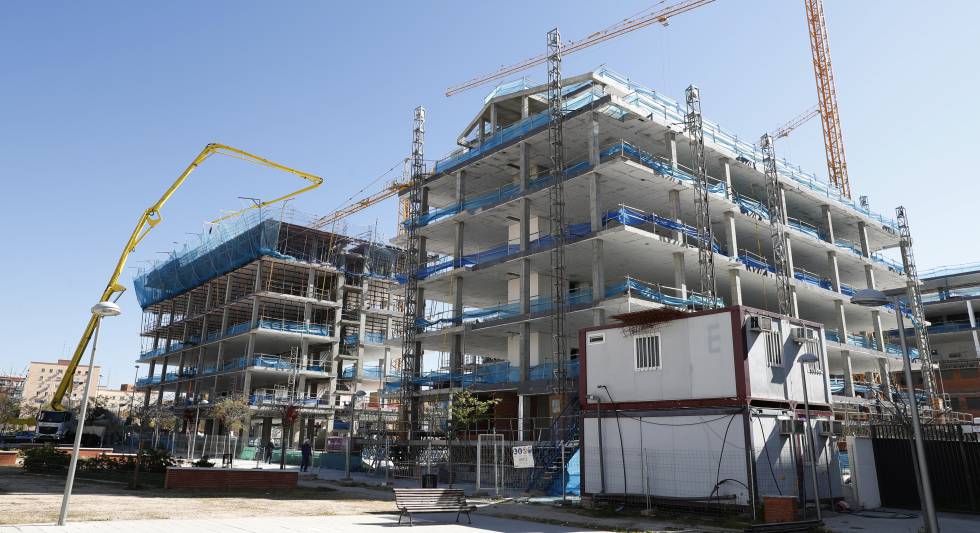 The lack of materials and the inflation caused by energy is stressing the developer sector. Housing construction works are becoming more expensive and stoppages and postponements are already beginning to occur while waiting to see if the situation improves. This scenario may cause a reduction in business for this year if the situation does not change radically.

Mikel Echavarren, CEO of the consulting firm Colliers, recognizes the slowdown that the residential sector is facing: “By 2022 we foresee a significant decrease in new construction permits, precisely due to the delay in the start of new homes. We could drop to levels of around 60,000 to 65,000 units started this year compared to the 110,000 expected”. Last year, 108,000 new construction visas were requested, according to data from the Ministry of Transport, Mobility and Urban Agenda (Mitma).

from the employer APCE, its general director Daniel Cuervo believes that it is still early to lower the forecast for 2022, but agrees that it will have to be assessed in a few weeks. “The forecast remains the same, approximately between 115,000 and 120,000 homes. If the situation continues for two or three more months, obviously the forecasts would have to be corrected downwards since the impact of inflation will have its consequences on the purchasing power of citizens”, he asserts.

The problem stems from a halt in the manufacture of certain materials due to the cut in supplies and the rise in energy prices, aggravated by the Russian invasion of Ukraine and the transport strike in recent weeks. In turn, this shortage and inflation is transferred to the entire industrial chain until it reaches the works. Cuervo indicates that the increase in energy costs has mainly affected cement, concrete, steel and ceramics. And in addition to these materials, aluminum, iron and glass are missing.

“Construction costs are going to continue to rise. Even before the crisis, they were increasing rapidly. Rising energy and commodity prices will cause them to rise further, likely causing new supply to be delayed or stopped. JLL real estate consultant.

Javier García-Mateo, partner responsible for the real estate sector in strategy and transactions at EY, indicates that it foresees “a complex period” in residential construction due to inflation in costs and supply problems. In fact, he considers that the sector is going to cool down. “There will be delays in deliveries and delays in launching new promotions.” It also points out that the logistics sector, where in recent years there has been a record investment, may be impacted in the construction of new projects as it is highly dependent on steel and aluminum, materials that have seen their price skyrocket and that are in short supply. the market.

At Metrovacesa they assure that the demand for housing remains stable

Juan Carlos Calvo, director of strategy for the developer Metrovacesa, also reveals that in recent weeks they have noted certain difficulties with some supplies. “We are evaluating the situation, as it is still early to say if it will have any impact, depending on how long it lasts,” he says. “But it is possible that fewer works will start in the coming months at a general level in the sector, waiting for the tensions in the prices of materials and the supply chain to gradually ease.” However, he believes that home sales and demand remain stable and continue to grow.

Metrovacesa, a listed company, maintains its forecasts for the start of works and commercial launches. Real estate experts point out more to small developers as those that may be most affected.

From the also quoted Neinor They also maintain their business forecasts and are optimistic about the sector. “In general, we believe that they will move in figures similar to those of 2021, although it is very difficult to make forecasts while the Russian invasion of Ukraine continues,” they respond about the homes that the companies will start. “The last few months have been marked by inflationary tensions and the data for March is shocking, but we trust that the trend will change in the short term, which will make it easier to contract new works,” they say.

Brake in the ‘build to rent’

Echavarren, from Colliers, assures that the promotions that are going to suffer the most are those in which the repercussion of land is less than 30% of the final value of the product, for example affordable and protected housing, where price variations can significantly affect apart from the promoter.

It also indicates that with respect to build to rent (build to rent), a segment in which international capital is entering with force and where the margins are already very narrow, new projects can be paralyzed for a few months until the panorama is clarified.

Plays. The problem of scarcity and inflation directly affects the construction companies and subcontractors that the promoters hire for the building. From Neinor it is indicated that the current environment is very complicated for everyone and among the most affected sectors is that of the construction companies: “They form a very important part of the productive fabric and generation of employment at the national level and must be protected as a strategic sector of the utmost importance.”

Sales. “Housing prices will continue to rise, although at levels below those of the very high inflation that we are experiencing,” says Mikel Echavarren, of Colliers. “New home sales will continue at similar levels to last year and we are likely to see a decline moderate increase in second-hand sales”, he adds.

Investment. Regarding the flow of capital to the real estate sector, JLL explains that there are possibilities that indecision will increase in the short term and that decision-making will be prolonged. “Global real estate capital flows into Europe from Asia and the US are likely to be more affected than intra-regional flows.” Daniel Cuervo, from APCE, affirms that investment in real estate continues to be very relevant due to the large amount of liquidity in the markets both nationally and internationally.

Great salary from ONCE, check the result of today’s draw, Saturday, October 1, 2022
21 mins ago

By admin
Recent Posts
Latest News
Facebook Twitter WhatsApp Telegram
Back to top button
Close
Featured Posts
Spain and Germany withdraw their troops from Mali while NATO warns of the risks in the Sahel | International
July 1, 2022

Portugal expedited the nationalization of Roman Abramóvich after pressure from the Jewish community of Porto | International
May 13, 2022

Marcos Júnior, the dictator’s son who regained power in the Philippines | International
May 11, 2022

Marcos Júnior, the dictator’s son who regained power in the Philippines | International

Gorbachev, the last leader of the Soviet Union, dies at 91 | International
August 30, 2022

Gorbachev, the last leader of the Soviet Union, dies at 91 | International

14 children and a teacher killed in a shooting at a Texas school | International
May 24, 2022