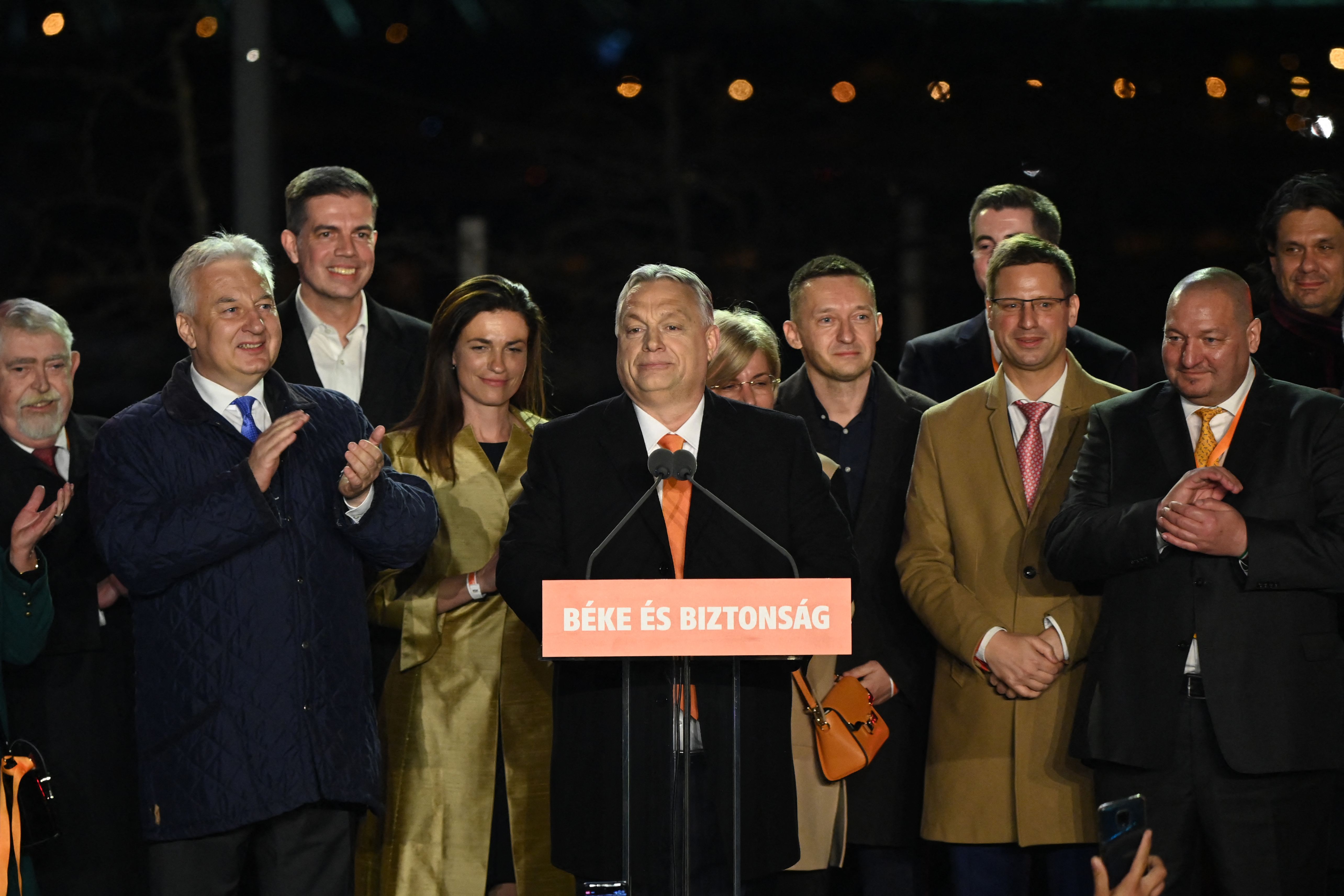 Viktor Orbán’s first message after his victory this Sunday for the fourth time in a row, and fifth in his career, was transparent: the European Union can prepare for new attacks from Budapest on Europe’s founding values. They will come with force, moreover, after achieving a new supermajority that surpasses even the previous one and gives legitimacy through votes to the Kremlin’s ally in the EU, which for the first time faced the opposition united in a coalition. In Serbia, outside the community bloc, the also populist Aleksandar Vucic was re-elected as head of state with a comfortable absolute majority. These are the first elections held in a Europe at war. In both, Vladimir Putin’s allies have achieved great success.

“We have had a great victory. So big that it can be seen from the moon, and of course, from Brussels”, proclaimed the ultra-conservative Orbán, 58. In the same message to his followers, he reviewed who he considers his opponents at this time: “We will remember this victory until the end of our lives because we had to fight against a large number of opponents: the local left, the international left, the bureaucrats from Brussels, all the money and institutions of the Soros empire, the main international media and the Ukrainian president as well.”

In the weeks of campaigning before the elections, the two leaders and candidates tried to keep a certain distance from their ally in Moscow, but without attacking him directly. Vucic declared his support for the “territorial integrity of Ukraine and supported the condemnation resolution in the UN, but refused to join the EU sanctionsa club he aspires to join, arguing that Russia did not impose these punishments on the country during the Balkan war in the 1990s.

Orbán went hand in hand with Brussels in all the sanctions approved so far, although with buts. In the last days of the campaign, he also accused the Ukrainian president, Volodímir Zelenski, of having reached an agreement with the opposition to intervene in the elections. After winning the elections, Orbán made it clear that the Ukrainian president has joined the list of his opponents, in which Brussels is among the top positions.

Russian President Vladimir Putin congratulated the Hungarian leader on Monday for his victory in the general elections, and expressed the desire to strengthen ties between Moscow and Budapest. “The Russian head of state declared himself convinced that, despite a difficult international situation, the future development of bilateral ties and cooperation (between Moscow and Budapest) will correspond to the interests of the peoples of Russia and Hungary,” the statement said. Russian presidency in a statement.

Budapest’s loyalties have been much closer to Moscow in recent years than to kyiv, with whom it had a dispute since 2017 at the expense of language policy that affects the minority of Hungarian origin residing in Ukrainian Transcarpathia. With Moscow, Orbán has strong economic ties, but in addition, the Putin regime is a model for which the ultra-conservative leader has built in Hungary.

In 2014, the prime minister, at the start of his second term consecutively, he opted for “breaking with the dogmas and ideologies adopted by the West” and following the model of “non-liberal systems, not liberal democracies and perhaps not even democracies”, among which he mentioned China, India, Turkey and, of course, Russia. Orbán, who has met with Putin 11 times in the last 12 years in power, according to him thinktank Political Capitalhas been inspired by some elements of the Russian regime based on the ultra defense of the nation, the family and Christianity.

Orbán belongs to the “Putin school” in the EU without a doubt for Camino Mortera, head of the Brussels office of the Center for European Reform. “Both play the same game: disinformation, corruption, oligarchic systems that are within the government, and the conservative national touch of identity.”

Without reaching the authoritarianism of Moscow, but moving away from democratic standards, according to organizations such as Freedom House, Orbán has been surrounding himself with a group of oligarchs close to power, singled out for corruption, which allow him to control economic sectors. In parallel, he has been surrounding NGOs financed by foreign capital and has singled out people from civil society whom he considers “mercenaries of [el filántropo George] Soros”. Without the need for direct censorship or media closures, it has distorted the market to allow the concentration of favorable media outlets that form a robust pro-government propaganda machine.

His latest challenge has been the LGTBI collective. In the summer of 2021, she passed a law that prohibits talking about gender and homosexuality in schools and places limits on the media, under the pretext of protecting children. Again, she reminds of the norm known as LGBTI anti-propaganda that Russia approved in 2003. This Sunday, Orbán intended to legitimize his law before the infraction procedure opened by Brussels, but the referendum he called together with the elections failed by failing to exceed 50% of valid votes.

Orbán’s first words after revalidating his victory were addressed to Brussels. “More than his speech, I am concerned about the majority with which he won the elections,” says Mortera, who describes this Sunday’s elections as “free, but not fair”, since it must be taken into account, among many other attacks on State of law, how his regime has been retouching the electoral system so that it benefits him.

This analyst, until recently, believed that the Hungarian leader’s bet would be to raise the tone of the anti-Brussels rhetoric in the electoral campaign, as he has done in previous appointments, to lower it immediately afterwards. She has incentives to do so, especially financial: Hungary is one of the few countries, along with Poland, that has not yet obtained the approval of the European Commission for its recovery fund. This change in attitude seemed predictable. But now, Mortera is no longer so sure that it will be like this: “Maybe the riot against the EU will rise. And, if that is the way, then perhaps we will see the break with the rest of the Visegrad group [Polonia, Eslovaquia y República Checa]”, he predicts. “The next steps are going to be very important for community dynamics and for the EU as an actor in response to Putin’s war.”

Hungary, which since the illegal annexation of Crimea in 2014 by Russia has taken a reluctant stance against retaliation against the Kremlin, has indeed aligned itself with the Block of Twenty-seven for the four rounds of EU sanctions approved since the invasion of Ukraine on February 24; It has also become one of the countries that receives the most Ukrainian refugees, although most only pass through Hungary on their way to other destinations. But he has opposed the shipment of weapons to Ukraine by EU countries going through their territory. And it could resist a fifth round of sanctions, which is already on the table in the capitals —especially since the terrible images of civilian massacres have surfaced since Bucha— thus blowing up a process that requires unanimity. “What happens if they all agree to sanction the banks that carry out transactions to pay for Russian energy [lo que implicaría un embargo de facto contra las importaciones de combustible desde Rusia]but he opposes? ”, asks Mortera.

It is possible that this marks its relationship with Poland, a traditional ally in its confrontation with Brussels, and with the rest of the Visegrad countries, with which the war in Ukraine has already caused a failure. Budapest, which currently holds the presidency of the group, last week canceled a meeting of defense ministers. In the background are the different worldviews about Putin’s Russia: “I am very sorry that cheap Russian oil is more important to Hungarian politicians than Ukrainian blood,” Czech Defense Minister Jana Černochova made Orbán ugly. “Losing those allies in their fight with Brussels seems to me to be playing with fire,” concludes Mortera. “Orbán has won with a comfortable majority, but he is running out of support at the European level.”

Havana: Cuba concludes the rescue tasks after the explosion of the Saratoga hotel with a balance of 46 dead | International

Check Also
Close
Salary of the ONCE: check the result of today’s draw, Sunday, October 2
14 mins ago

Ukraine: Questions and answers on war crimes, crimes against humanity and genocide | International

What was life like before the internet? The catalog of 100 things that we lose | Technology
March 10, 2022

What was life like before the internet? The catalog of 100 things that we lose | Technology

The EU gives the greatest show of support for Ukraine by endorsing its candidacy for the community bloc | International
June 23, 2022

Video | The electoral debate between Macron and Le Pen, in four moments | Videos

Ai Weiwei: “China and Russia need to cooperate to offset ideological conflicts with the West” | International

Fire in the largest park in the Northeast, or fourth this year, raises suspicions about factions and real estate disputes | News
March 10, 2022

Fire in the largest park in the Northeast, or fourth this year, raises suspicions about factions and real estate disputes | News