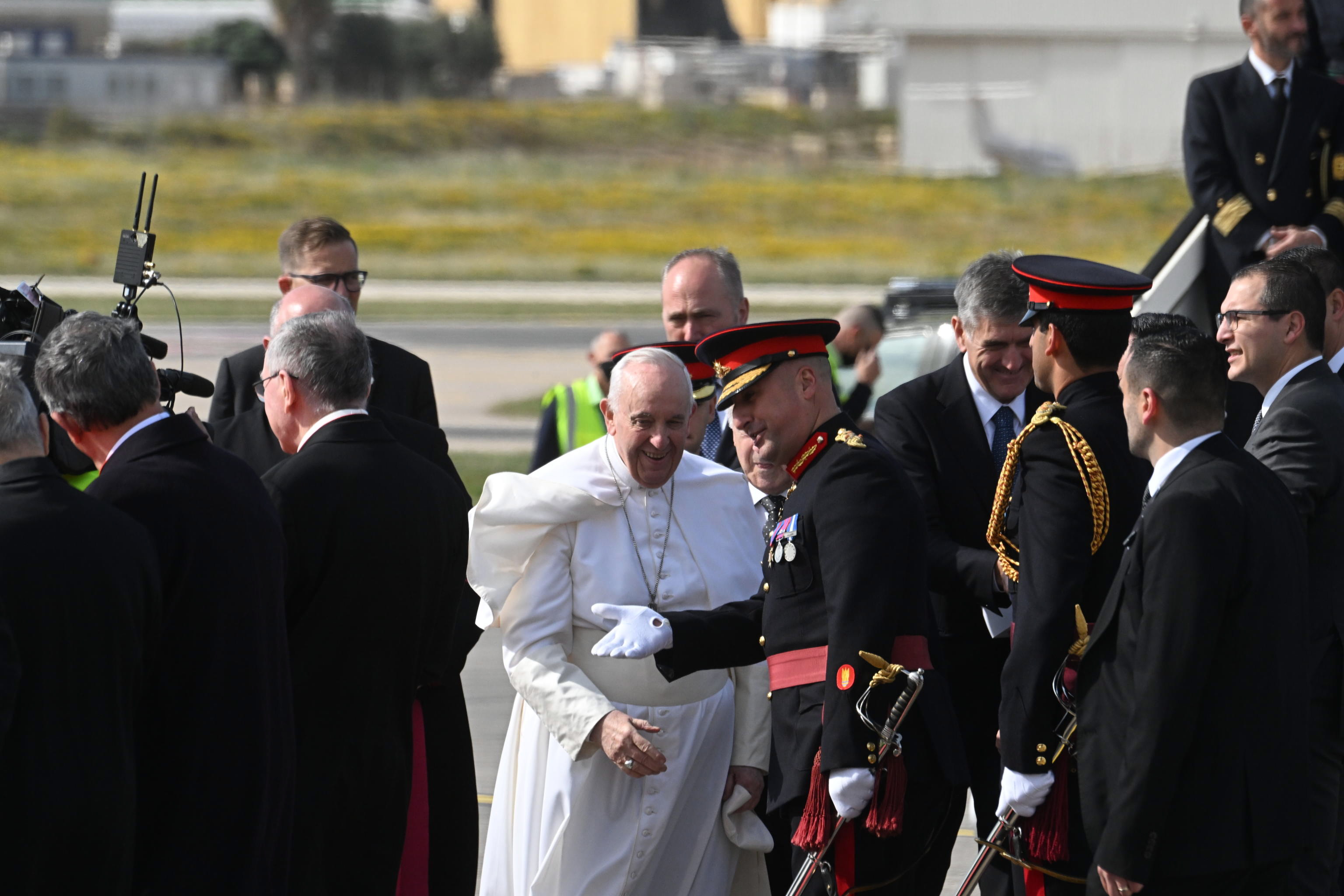 Pope Francis and the Vatican have been trying for weeks to mediate diplomatically in the conflict between Ukraine and Russia. The efforts have been made at all levels without much success now. But on March 22, the Pontiff received an invitation from the Ukrainian president, Volodymyr Zelensky, to travel to Ukraine. It was during a telephone conversation that both had. This request was also made by the mayor of kyiv, Vitali Klitschko. Until now, the Pontiff had not commented on the matter. But in full flight to Malta, where he will stay for two days, he has responded to journalists that he is contemplating the possibility of accepting it. “Yes, it is on the table,” Francis said.

The Vatican has been very careful not to break the diplomatic bridges with Moscow, already very damaged in recent times. The language has been somewhat ambiguous so far: Francis has never used the words Russia or Putin to refer to the war. The Holy See has moved and has sent several cardinal representatives to the area on the ground: the head of the Pope’s alms house, the Polish Konrad Krajewski, and the Czech Michael Czerny. But the main problem was with the different vision of the conflict between the Vatican and the Orthodox patriarch of Moscow. Kiril has been much more belligerent, even justifying the invasion for religious and moral reasons, something that made Rome very uncomfortable.

On March 17, however, the positions became closer and an important channel of dialogue was opened between the two Churches, which maintain a complicated relationship. Especially since Kiril sharpened his tendency to become the spiritual arm of the expansionist and warlike policy of Russian President Vladimir Putin. The telematic meeting of both spiritual leaders that day could have opened the way for the trip to kyiv. A visit difficult to imagine if it were not accompanied by the same gesture on the part of Kiril.

Upon his arrival in Malta, Francis continued to speak on the subject in his first speech, referring to the “icy currents of war” coming from the east these days. In particular, he seemed to point the finger directly at Russian President Vladimir Putin for the first time. Although not yet naming it, just as he had avoided all these months. “Some powerful, sadly locked in the anachronistic pretensions of nationalist interests, provokes and foments conflicts, ordinary people warn of the need to build a future that will be together or will not be.” In addition, on the flight that took him from Rome to Malta, Francis pointed out that the idea of ​​traveling to kyiv to try to mediate on the ground “is on the table.” An expression that opens wide the door to accept the invitation that the Ukrainian Prime Minister, Volodímir Zelenski, launched a few weeks ago.

The Pontiff will remain in Malta for two days, where he will focus part of his attention and his speeches on the issue of immigration. But the coincidence of the trip – postponed twice due to the pandemic – with the war in Ukraine, has forced him to focus a large part of his words on said conflict. A war in which the Vatican has tried to mediate, so far, without success. “We thought that the invasions of other countries, the brutal fighting in the streets and the atomic threats were dark memories of a distant past. But the icy wind of war, which only brings death, destruction and hatred, has arrogantly swept down on the lives of many and the days of all.”

Vatican diplomacy has avoided making direct references to Russia or Putin in recent weeks. In fact, attempts are being made to rebuild bridges with Patriarch Kirill of Moscow – one of Putin’s promoters of the war – to organize a meeting to find a path to peace. On Saturday, however, Francis charged hard against Russia. “We need a human measure against the childish and destructive aggressiveness that threatens us, against the risk of an enlarged cold war. […]. That childishness, unfortunately, has not disappeared. It returns arrogantly in the seductions of the autocracy, in the new imperialisms, in generalized aggressiveness, in the inability to build bridges and to start with the poorest. It is here that the icy wind of war begins to blow.”

The war, Francis believes, has been fueled for years. And here the Pontiff distributes the blame. “Yes, the war has been in preparation for a long time, with large investments and arms trade. And it is sad to see how the enthusiasm for peace, which arose after the Second World War, has weakened in recent decades, as well as the path of the international community, with a few powerful people who continue on their own, looking for spaces and influence zones. And, in this way, not only peace, but so many great issues, such as the fight against hunger and inequalities, have in fact been canceled from the main political agendas”.

The metaphor of the compass rose also served the Pope to talk about other issues that affect Malta, such as the problems of corruption and its financial derivatives. The most notorious was the one that led to the murder with a car bomb of the investigative journalist Daphne Caruana Galizia in 2017, who had investigated several cases. The previous prime minister, Joseph Muscat, had to resign when tycoon Yorgen Fenech, who linked several people in the cabinet to the event, was arrested. “To guarantee a good social coexistence, it is not enough to consolidate the sense of belonging, but rather the foundations of common life, which is based on law and legality, must be reinforced. Honesty, justice, a sense of duty and transparency are essential pillars of a civilly developed society. May the commitment to eradicate illegality and corruption be, therefore, as strong as the wind that, blowing from the north, sweeps the coasts of the country. And that legality and transparency are always cultivated, which allow delinquency and criminality to be eradicated, united by the fact that they do not act in the light of the sun”.

Francis also referred to the problem with the reception of migrants that the island of Malta faces. And while he stressed the need to open doors, he also charged against international conventions that leave first-arrival countries like Malta alone. “The expansion of the migratory emergency requires broad and shared responses. Only some countries cannot bear the whole problem, while others remain indifferent. The Mediterranean needs European co-responsibility to once again become a scenario of solidarity and not be the outpost of a tragic shipwreck of civilizations”.

Key Jan. 6 Witness Says Trump Knew the Mob Was Armed and Still Instigated It to March on Capitol Hill | International

NATO: More than 4,000 soldiers, 21 fighters and tons of artillery stand up to the Russian threat in the Baltic countries | International
June 25, 2022

NATO: More than 4,000 soldiers, 21 fighters and tons of artillery stand up to the Russian threat in the Baltic countries | International

78 years in prison for the accused pelas mortes in the kiss kiss, “so that it never happens again” | News
March 9, 2022

78 years in prison for the accused pelas mortes in the kiss kiss, “so that it never happens again” | News

Last minute of the war in Ukraine, live | More than 22,000 residents killed in Mariupol since the invasion, according to Ukrainian authorities | International
May 25, 2022

Last minute of the war in Ukraine, live | More than 22,000 residents killed in Mariupol since the invasion, according to Ukrainian authorities | International

Russia raises the threat on Mariupol with an ultimatum for its surrender | International
March 20, 2022

Peru: Castillo decrees a state of emergency in Lima and people will not be able to go out on the streets | International
April 6, 2022

Peru: Castillo decrees a state of emergency in Lima and people will not be able to go out on the streets | International

The Italian oil company Eni will open an account in rubles to pay for Russian gas | International
May 18, 2022

The French socialists sign an agreement in principle with Mélenchon that threatens the party’s fragile unity | International
May 4, 2022

The resistance of women in Afghanistan | International
August 7, 2022

The resistance of women in Afghanistan | International