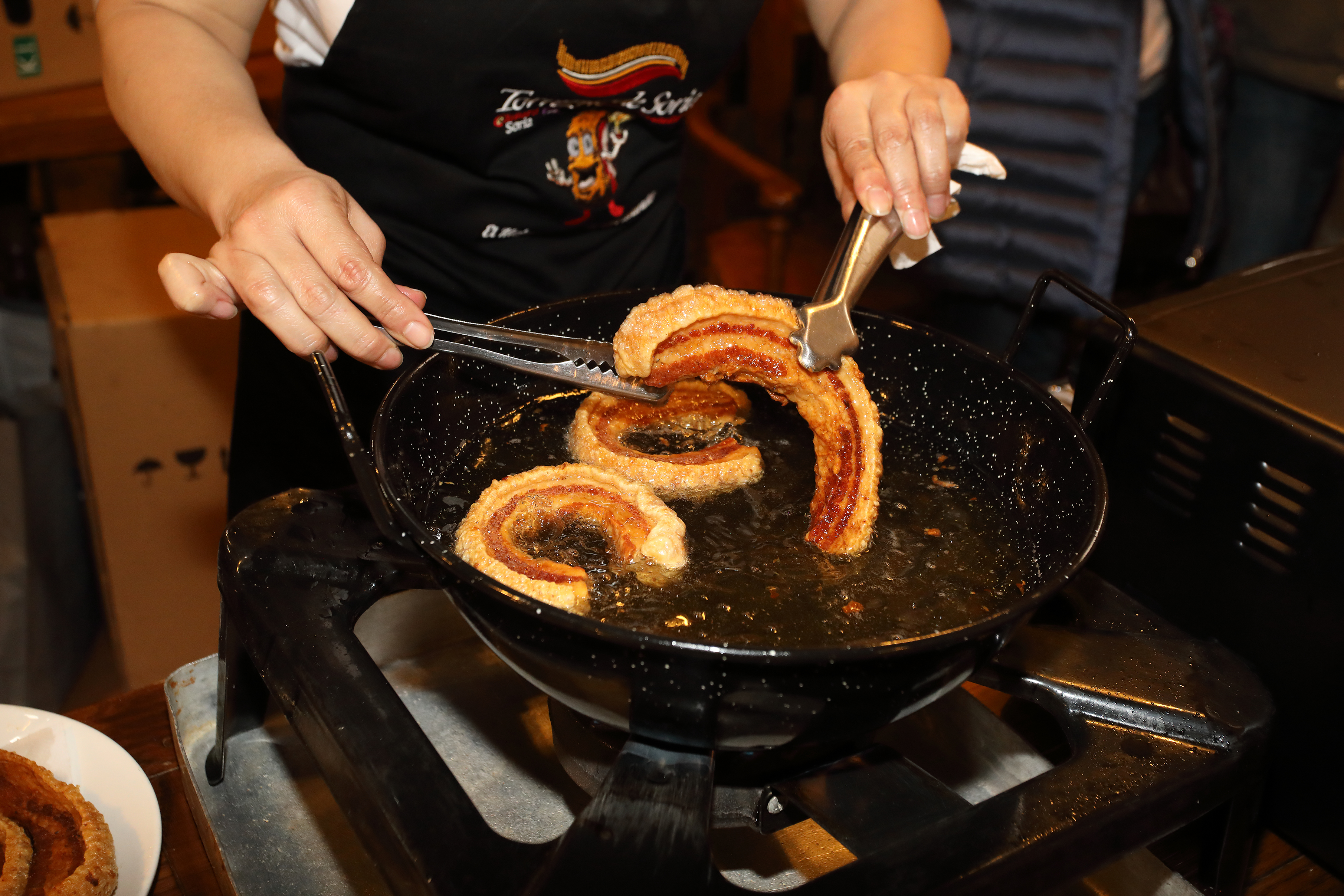 Walking through the streets of any town in the province of Soria at noon becomes torture for those who don’t have time to drink a vermouth but feel their stomach growl. The lucky ones who have lunch accompany their wines or beers with a delicacy that smells and feeds and that has become Soria’s gastronomic emblem: torrezno. The success can be seen in the portions and in the data: in 2021, an unprecedented figure of more than 1.75 million kilos of this fried pork belly, tender and melting on the palate, was dispensed, and has gone from being served in taverns to become strong in posh bars. The Soria Chamber of Commerce has an ambassador on the rise in this succulent product which, according to the consortium’s calculations, represented more than 15 million torreznos tasted throughout Spain. The joy for the diner reverberates in Soria, where this gastronomic delight generates more than 50 direct jobs and a turnover of 15 million euros.

The torrezno phenomenon has become so strong that not even the year of the pandemic, that 2020 of hotel closures and economic and social paralysis, stopped its boom. The dishes continued to be served in places like El Burgo de Osma (4,900 inhabitants) even after the scourge of Filomena and they were consumed especially in that summer in which the virus seemed to have hidden. The 1.75 million kilos of 2021 represent 40% more than the critical 2020, which in turn represented an increase of 13% compared to 2019, a year without health cataclysms. Last November became the best month for this pork product, with 182,210 kilos sold. This amount was made with part of the more than one million bacon registered with the Torrezno de Soria Guarantee Mark, which includes the nine members of the manufacturers’ association. This activity began to be measured in 2014, when 369,000 kilos of this food were computed, almost five times less than in 2021, a figure that stimulates the union.

The key to success lies in unity, says Teo Martínez, manager of the Embutidos La Hoguera company from Soria and vice president of the Torrezno de Soria brand. “That competing companies have worked together towards a common goal is something exceptional”, highlights the businessman, who celebrates the fact that this food is consumed with pleasure in fashionable places such as those on Calle de Ponzano in Madrid, something unthinkable a few years ago, when This icon from Soria was considered more typical of bars: “It looked almost like offal, now they ask us directly because they want to have it.” “The important thing is not who each one is, but the torrezno de Soria”, says Martínez, satisfied that the nine companies have put this appetizer before their commercial name.

This bacon dish has managed to develop at a time when health and diets mark the diet of potential customers. Martínez warns: “The torrezno does not deceive anyone”. In times of abundant sales of hamburgers or pizzas through distribution platforms, the Soriano guild admits that this bacon may be frowned upon. “Uncle, you’re crazy, torrezno is fatty, what’s in fashion is fine,” says the director of La Hoguera, who they were told when they decided to bet on it. Nobody will deny the evidence, he points out, but they do clarify that it is bad “if you eat 10 a day”, not if you enjoy it for lunch from time to time. To achieve the perfect quality of torrezno even hundreds of kilometers from their small homeland, factories prefer it in their facilities so that it is easy to store and make in the hotel or at home, as it can also be bought in stores. “The preparation is expensive and takes time because it is prepared slowly, we have achieved that in bars or kitchens it is finished off in three minutes without preservatives or anything,” Martínez details.

The torrezno corporation boasts that they have increased their impact thanks to a “guerrilla economy”, with perseverance in social networks, appearing in blogs and with advertisements at Soria bus stops. La Hoguera has been working with ham and chorizo ​​as the main exponents for about 30 years and only recently has it looked at bacon, hence its economic weight is relative in its accounts. On the other hand, Martínez celebrates, those factories with a “mono-product” of torrezno have managed to enter the market beyond Soria “with an argument” and differentiate themselves.

The expansion of this part of the pig has even colonized a territory as different as that of chocolate. The Soria company Dulces El Beato was encouraged this summer to combine torrezno with chocolate and generate the chocorrhno, which for the creator, Carlos Paris, received comments that ranged from “aberration” to “delight”. “It is a nice product, chocolate has less impact than torrezno, we get along very well and we have made a symbiosis”, details Paris, who humorously recalls the welcome from the streets of El Burgo de Osma when he gave them to try that original mixture . The evaluation of the palate was positive, but the faces of astonishment multiplied when specifying the composition. The first week they took out 50 tablets for El Burgo. They were sold in a single day, and in a few months they have already placed 50,000 units throughout Spain and on orders from abroad.

The packaging includes a smiling and pink pig that precedes three varieties: white, with milk and pure. The crust that they add comes from baking the torrezno, removing the fat and leaving it as “a crunchy” that is added together with the ground chocolate crust: “For every kilo of torrezno we get 350 grams of product”. From there comes the 10% of concentrated torrezno that carries the compound. The sweet torrezno revolution makes those who live from it proud, who celebrate that it has put emptied Spain on the culinary map: “People want it”. The moments of maximum activity, prior to periods such as Easter or summer, when tourists spread out in Soria, make the staff of 10 employees reach 19. If the idea that Paris has in mind bears fruit, which makes one lick his lips when he confesses it Although it is still a state secret, there will soon be a lot of fuss in the world of torrezno and chocorrhno: “We’re going to mess it up again.”

The war is also being waged on raw materials, is there a danger of supply cuts? | markets

The trump cards of kyiv and Moscow for a prisoner exchange: a Putin ally for two foreign fighters | International

Russia is willing to allow the export of grain if Ukraine agrees to demine the coast | International
June 8, 2022

Last minute of the war in Ukraine, live | Russia will reinforce the offensive in Donbas once Mariupol is controlled, according to the United Kingdom | International
May 20, 2022

Last minute of the war in Ukraine, live | Russia will reinforce the offensive in Donbas once Mariupol is controlled, according to the United Kingdom | International

Venezuela: The UN concludes that opponents were tortured by government orders in a network of clandestine houses in Venezuela | International
2 weeks ago

Venezuela: The UN concludes that opponents were tortured by government orders in a network of clandestine houses in Venezuela | International

Zelenski speaks to Latin America for the first time: “Do not maintain trade with Russia”
August 18, 2022

Zelenski speaks to Latin America for the first time: “Do not maintain trade with Russia”

Video | Refugee Day: this is how the flows have changed during the war in Ukraine | on video
June 20, 2022

Video | Refugee Day: this is how the flows have changed during the war in Ukraine | on video