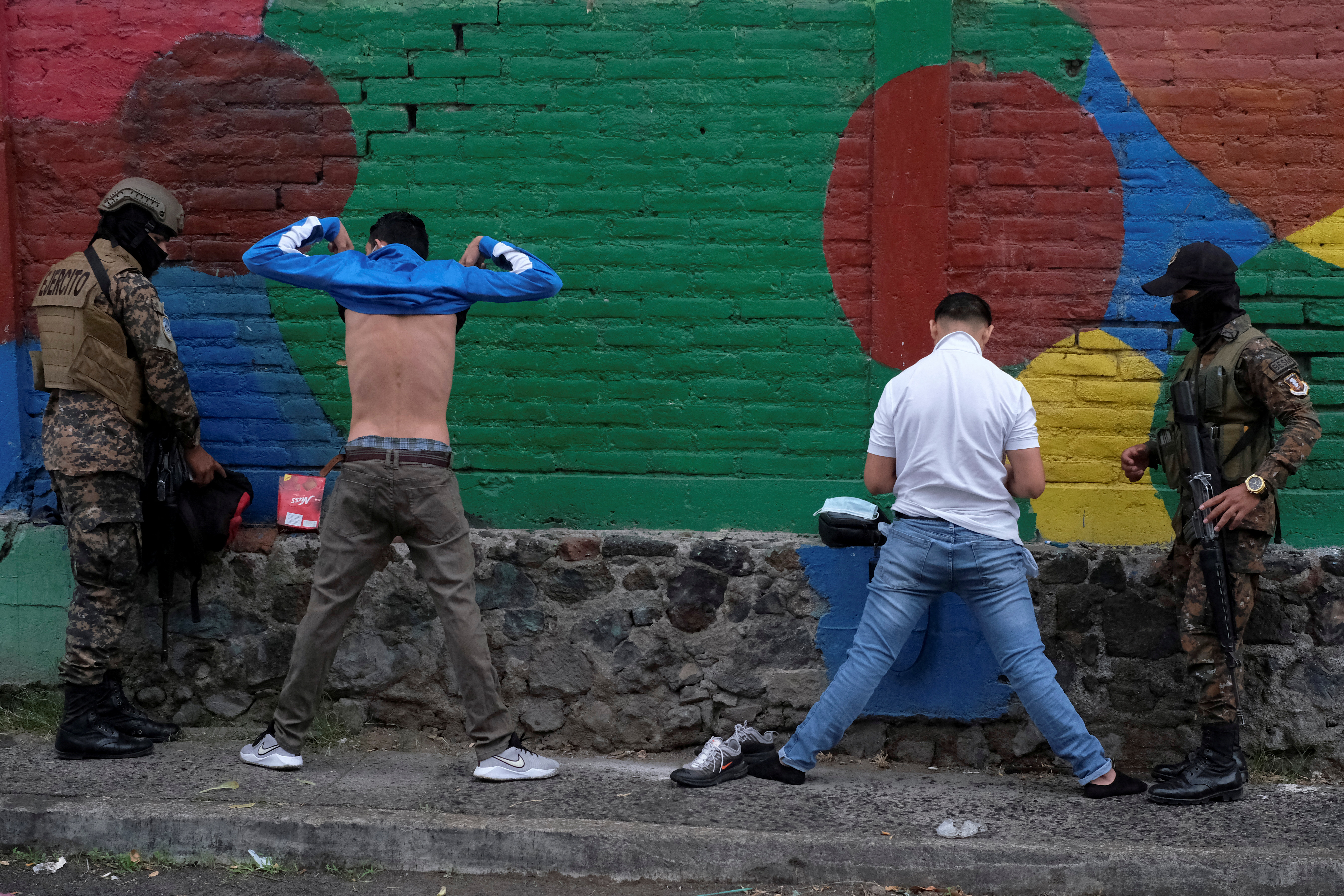 The crusade of the President of El Salvador, Nayib Bukele, against Salvadoran gangs, which celebrates its fourth consecutive day, took another step this Wednesday when Congress approved a series of laws that toughen prison sentences for gang members. While deputies approved changes to the criminal code, mass arrests of suspects continued on the streets. The decision to modify the sentences joins the package of measures put in place since more than 70 people were murdered on Saturday in areas controlled by the MS-13, with which Bukele decided to fight back.

The “war on gangs” includes more money for the police, more years in prison for gang members, and more weapons for the Army. A decision made by the Assembly in the midst of a state of exception that limits some fundamental rights of the population.

Starting this Thursday, belonging to any of the three gangs, MS-13, La 18 or La 18 Revolucionarios, will be punished with 30 years in prison, regardless of whether the detainee is proven to have committed any crime. If the gang member is a “ringleader”, the penalty will be 40 to 45 years. Before the reform, gang membership was punishable by three to five years in prison or six to nine years in the case of leaders. In the new Penal Code, a 12-year-old boy who belongs to a gang can be in prison for up to ten years and, if he is under 16, he can be sentenced to up to 20 years in prison. “Today, belonging to gangs will be punished as it should be,” said Caleb Navarro, deputy for the ruling party Nuevas Ideas.

The toughening of sentences comes after deputies approved last Sunday the state of emergency that restricts freedoms and expands the powers of the police and the Army, after the wave of violence that left 87 dead. The reform to the Penal Code also establishes that those who “promote, help, facilitate or favor the formation or permanence in groups” of gangs will receive a sentence of 20 to 30 years in prison.

According to the authorities, the gangs, which have some 70,000 members, in addition to obtaining money through extortion, also feed financially on drugs, for which the drug-dealing gang members will be sentenced to 20 years in prison.

Regarding the reforms, the deputy of Nuevas Ideas Jorge Castro said that they are “legislating for officials and individuals who made pacts and for the corner parties that have sat down with these groups,” he assured, pointing to the opposition parties. Castro did not mention the current director of Prisons, Osiris Luna, and the director of Social Fabric, Carlos Marroquín, who have been singled out and sanctioned by the United States for negotiations with gangs, while they continue to serve in their positions.

Ending the gangs, which skyrocketed the number of homicides over the weekend, is the main obsession of Nayib Bukele, who even portrayed himself as working “24/7”, as one of his many tweets published on Wednesday points out. The vast majority of them were intended to detail the arrests made throughout the country, more than 2,500 according to the police chief, and to charge against human rights organizations such as the Inter-American Commission on Human Rights (IACHR). The agency has expressed concern about the arrests and Bukele’s order to cut the prisoners’ diet by half.

“Salvadorans remember: when gang members murdered dozens of innocent people, the IACHR did not say a single word. But they didn’t take even 1 day to condemn that we got tougher with them in prisons. Always remember what interests they represent,” he wrote in a tweet. In another message he lashed out at the international community by saying: “Do you know how many countries have decided to help us in the war against the gangs? Exactly: NONE Do not come later to tell us what we should have done or not done, when at the moment we could have needed them, they left us alone, ”he wrote.

The package of measures approved this Wednesday includes providing more money to the Army and the police. At the same time, the president exhibited the arrival in the country of new military tanks destined for surveillance on the streets and roads.

The EU seeks answers for its future by asking citizens | International

Neuquén: Three dead in a refinery fire in southern Argentina

Chavismo meets with Russia after Venezuela’s rapprochement with the White House | International
March 10, 2022

Bachelet avoids delving into the repression of the Uyghurs in Xinjiang at the end of her visit to China | International
May 28, 2022

“Spare room for a mother and a child”: the Germans turn to the Ukrainian refugees | International
March 11, 2022

“Spare room for a mother and a child”: the Germans turn to the Ukrainian refugees | International

The keys to the political crisis in Colombia after the elections | International
March 23, 2022

Pope Francis visits the tomb of Celestine V, the first pontiff to resign from office | International

NATO Summit 2022 in Madrid, live | The main western leaders close this Thursday the forum of the Alliance that has set its course for the next decade | International
June 30, 2022

NATO Summit 2022 in Madrid, live | The main western leaders close this Thursday the forum of the Alliance that has set its course for the next decade | International