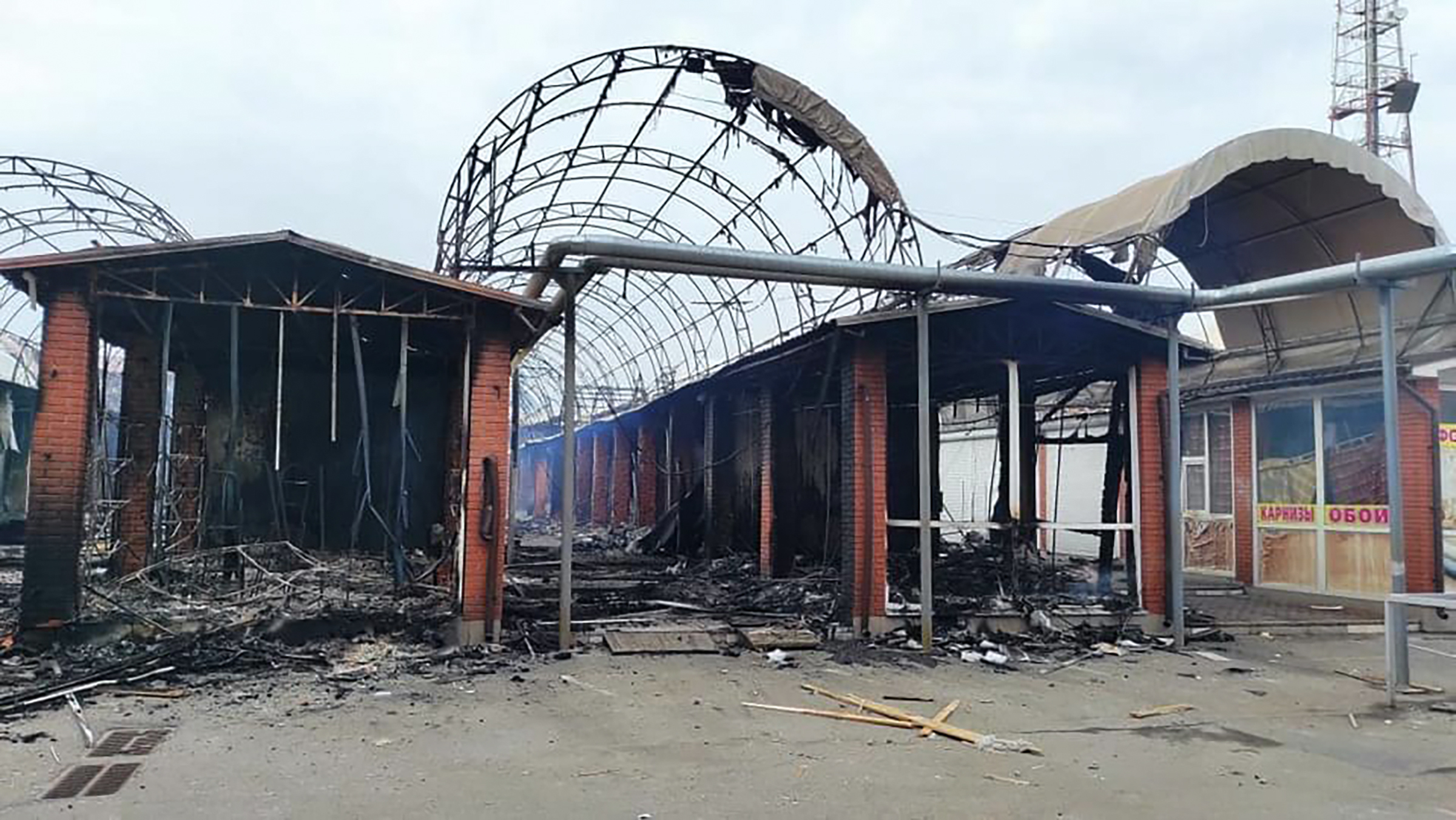 The end of Vladimir Putin’s war against Ukraine does not seem near. Despite Moscow’s promises to “drastically” reduce attacks in that area, Kremlin troops have continued to forcefully bomb Chernihiv, in the northeast of the country, practically besieged by Russian forces and heavily hit by bombing. A day after the peace talks in Istanbul that offered small advances on the path of dialogue, Russia has also attacked the outskirts of kyiv despite the fact that, as in Chernihiv, it promised not to do so in order to “increase mutual trust” in the conversations. Given the lack of progress in the capital and with its troops bogged down and logistical problems, Moscow continues to press those areas, although it focuses its efforts on eastern Ukraine. Especially in Donbas, where efforts have been increased to advance towards the city of Sloviansk, in the Donetsk region, and progress is being made in the offensive on Mariupol, the port town devastated by bombs, of which they already control a part and where they are trying to force a capitulation.

Russian troops have also reorganized to thwart Ukraine’s counteroffensive in the south, where they have made their biggest gains yet with the capture of Kherson, the only regional capital they control. Moscow is trying to maintain its gains on that flank where it is using the Crimean peninsula — which it illegally annexed in 2014 — as a military launch pad and advance on Mikolaiv and to the east, with the aim of surrounding the Ukrainian troops in Donbas from the northeast and from the south, according to the latest analysis of the Institute for the Study of War.

Ukraine’s President Volodymyr Zelensky warned Tuesday night that the country “should not cease to be vigilant” following Russia’s announcement that it would reduce its military activities near kyiv. The Ukrainian government and its Western allies are skeptical about Putin’s announcements and intentions. This Wednesday, the Kremlin spokesman, Dmitri Peskov, stressed that there were no major advances in Istanbul, although he has pointed out that the delivery of written proposals from kyiv is a “positive factor”. “There is still a lot of work to be done,” insisted Peskov, who explained that the Russian negotiating delegation will meet with Putin. Moscow tries to have an advantage at the negotiating table.

Meanwhile, the UK Defense Ministry has indicated that Putin’s troops have been forced to return to Russia to reorganize and resupply after suffering heavy losses. Moscow’s shift in focus to Donbas is “probably a tacit admission that it is struggling to maintain more than one axis of advance.” In its analysis, London has also warned that Russia “is likely to compensate for its reduced ability to maneuver on the ground through massive artillery, strikes and missiles.”

In Chernihiv, the situation is dramatic, local authorities warn. Some 400 civilians have been killed in the city since Putin launched the invasion. Those who remain in the city, with 285,000 citizens registered before the war, a quiet town and where hardly anyone believed in the possibility of the armed conflict reaching their doors, do not have water, electricity or gas. Tonight and this morning the shelling continued there. The governor, Viacheslav Chaus, and the mayor, Vladislav Atroschenko, have accused the Kremlin of lying. “The ‘decrease in activity’ in the Chernihiv region was demonstrated by the enemy carrying out attacks on Nizhyn, including air strikes, and throughout the night they attacked Chernihiv,” Chaus warned in a Telegram message. Chernihiv is about 140 kilometers from kyiv.

Oleksiy Arestovich, a Ukrainian presidential adviser, warned on Wednesday that Russia is moving troops from the north, especially from the kyiv region, to the east to encircle Ukrainian forces; but he has not confirmed a withdrawal from the Chernihiv zone. Meanwhile, they have intensified the offensive in the Donbas area, the mining area in the southeast of the country that gives its name to Putin’s operation to “denazify” Ukraine and liberate and “protect” the Russian-speaking population.

Pavlo Kirilenko, the governor of Donetsk, one of his two Donbas regions, remarked on Wednesday that Kremlin troops are shelling all the cities along the front line that has separated Ukrainian forces from the of the pro-Russian separatists through whom Moscow controls the self-styled “people’s republic” of Donetsk.

kyiv forces have fought four Russian advances in the Luhansk and Donetsk regions in recent days, according to the Ukrainian military. The authorities also denounce that Russia is shelling residential areas of the city of Lysychansk, in the Lugansk region, with “heavy artillery”. The Russian Ministry of Defense has assured this Wednesday that it has destroyed “Ukrainian military equipment” and two warehouses in Donbas with its attacks.

In Mariupol, also in the Donbas region, intense fighting continues. The city has been under siege and encirclement for a month and is practically devastated. Local authorities estimate that 5,000 civilians have died in the city. Meanwhile, Moscow has assured that it does not attack civilians and blames the “nationalist outsiders” for the destruction of the port city, already a symbol of the suffering of Ukrainian citizens. More than four million people have already left Ukraine due to the violence unleashed by the invasion of Vladimir Putin, who despite the great loss of human life — and of his own troops — and international condemnation, insists that everything is going according to his plan.

Presidential elections in Chile: the crucial points of the second round between José Antonio Kast and Gabriel Boric | International

By admin
Recent Posts
Latest News
Facebook Twitter WhatsApp Telegram
Back to top button
Close
Featured Posts
A Scholz sinking in the polls is forced to testify before the Hamburg Parliament over a financial scandal | International
August 20, 2022

Kais Said: The president of Tunisia strengthens his popularity despite having monopolized all the power | International
April 8, 2022

Kais Said: The president of Tunisia strengthens his popularity despite having monopolized all the power | International

Pope Francis, on his possible trip to Ukraine: “I am available” | International
April 3, 2022

Pope Francis, on his possible trip to Ukraine: “I am available” | International

Russia expands its objectives in Ukraine beyond Donbas | International
July 20, 2022

Russia expands its objectives in Ukraine beyond Donbas | International

Brussels fears that Putin’s war will cause waves of migration to the EU from North Africa | International
June 22, 2022

Gabriel Boric will promote a new convention if he wins the rejection of the constitutional proposal in Chile
July 16, 2022