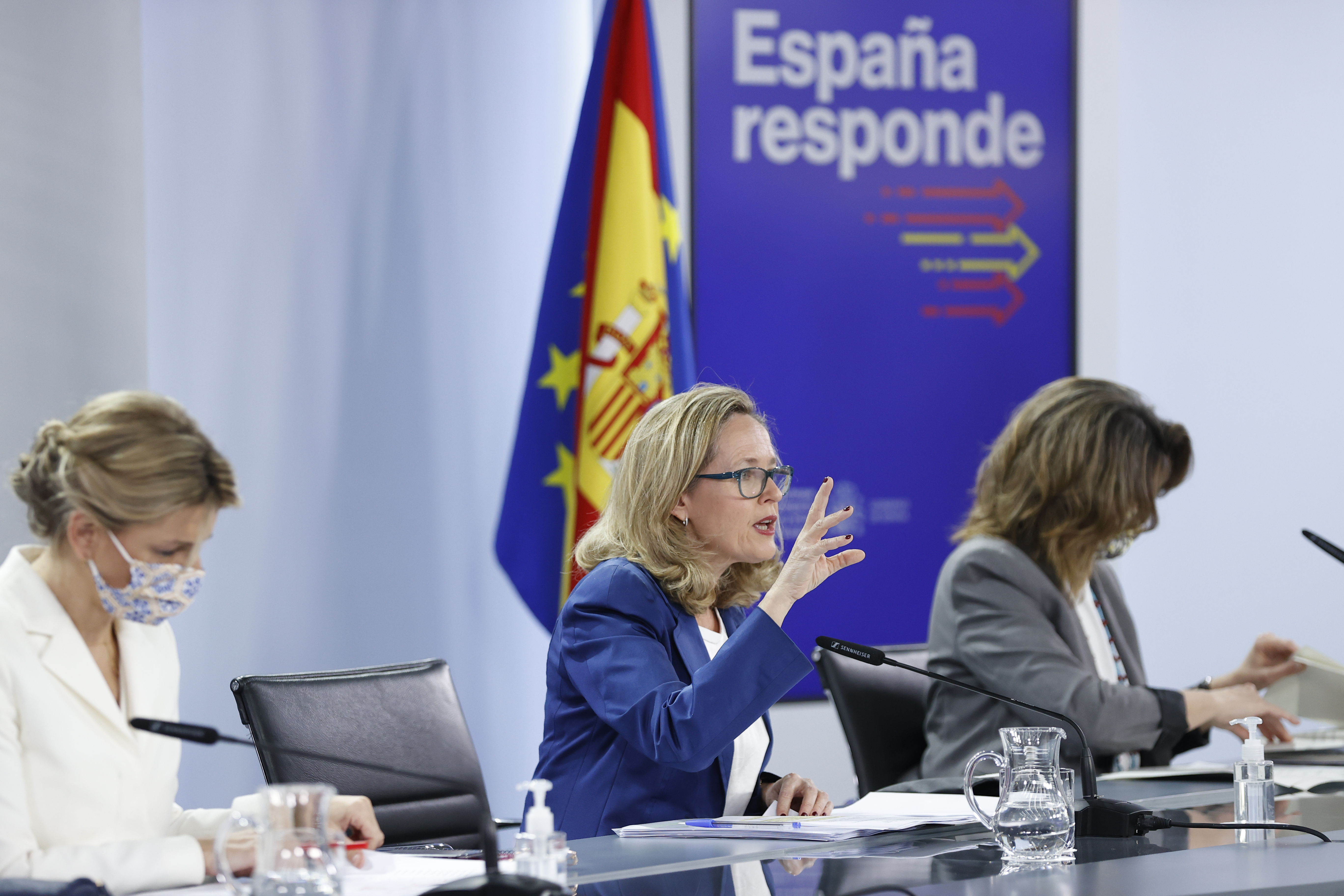 The Government has approved this Tuesday the long-awaited package to respond to the energy crisis caused by the war in Ukraine with aid of up to 16,000 million (6,000 million in direct aid and tax rebates, and another 10,000 million in ICO credits). The countdown until the presentation of the plan – President Pedro Sánchez announced that there would be a millionaire shock plan two weeks before – has been marked by social protests, especially the strike of carriers, which have worn down the Executive. However, the coalition government is trying to turn the situation around with what was achieved at the last European summit and the measures agreed upon.

Among the aid, the bonus of 20 cents per liter of fuel for all citizens, whether individuals or professionals, stands out. Although the anti-crisis package also includes a limit of 2% increase in rent revisions, an increase in the amount of the minimum vital income, the prohibition of dismissals that allege the increase in energy prices during the coming months and the reduction of electricity taxes, among others. This is the list of measures that the Government has approved after weeks of intense negotiation within the Executive, with the opposition, social agents and community partners.

Between April 1 and June 30 there will be a minimum bonus of 20 cents for each liter of fuel for motorists, whether private or professional. Of this amount, the Government will bear the reduction of 15 cents and the oil companies the remaining 5 cents. There is talk of a minimum discount because some companies have increased the amount they subsidize, for example Repsol, Cepsa and BP.

Work recovers the prohibition of objective dismissals, as it did during the coronavirus crisis, although this time it is limited to companies that receive some type of direct aid contemplated in the shock plan in response to the war. With this measure, for example, companies will not be able to justify a dismissal due to an increase in the electricity bill. What they will be able to use will be the temporary employment regulation files (ERTE) as a form of internal flexibility to cushion the blow of the impact of the war. “It would not make any sense to allocate public resources paying salaries and social contributions if we later allow those companies to be fired,” Yolanda Díaz, second vice president and Minister of Labor, defended after the Council of Ministers.

The Executive has included, after intense negotiation within the coalition government, a 2% increase limit in rent reviews between April 1 and June 30, although the term could be extended if the situation of crisis persists. In addition, leases are differentiated between large and small owners. However, this will have no practical consequences for tenants.

The amount of the minimum vital income will increase by 15% over the next three months. In 2022, according to the updated table of the Ministry of Social Security, the income ranges from 491.63 euros per month to 1,081.59 euros, depending on the type of cohabitation unit. Thus, the amount of aid will depend on the amount that corresponds to each beneficiary: it will range between 73.74 euros and 162.24 euros of additional aid per month between April and June.

All aid is focused in some way to alleviate the consequences of the energy rise. Although there are two more specific ones on the electricity bill: the extension to 600,000 more families of the electricity social bonus – it will reach 1.9 million homes. This is articulated by raising the income limit to be a beneficiary of the bonus by 0.5 times the IPREM so that more consumers who have contracted the regulated rate can benefit from this discount on the electricity bill.

Postponement of ICO credits and new line of guarantees

Economy has promoted the extension of the maturity period of the loans guaranteed by the Official Credit Institute (ICO), as well as the grace period in six more months for the sectors most affected by the crisis unleashed by the war in Ukraine. “It is no longer necessary for the turnover in 2020 to have been reduced by more than 30% compared to 2019 in order to access this extension of the term”, assured Nadia Calviño, first vice president and minister for Economic Affairs, at the conference press release after the Council of Ministers. In addition, there will be a new line of guarantees for 10,000 million euros. “The objective is to respond to the liquidity needs of many companies and the self-employed due to the rise in energy prices,” added Calviño. These new credits may be granted until December 31 of this year and will have a grace period of 12 months.

The anti-crisis package includes aid by sectors. On the one hand, a public injection of 362 million euros is collected for the agriculture and livestock sector. The fishing sector corresponds to 68 million. And to the industry that is a large consumer of energy, 500 million are dedicated to offset tolls by 80%, reach the maximum allowed in CO₂ compensation and reinforce direct aid to the sector. In addition, the Government details that there will be other additional measures for the industrial, export and cultural sectors.

The carriers, who have staged protests in recent weeks that have put the Executive in a brief, will benefit from an injection of 1,050 million. That includes the 600 million that it is estimated that the reduction in fuel will cost the State, from which they will cover a discount of 15 cents per liter. The other 450 million will be channeled through a new fund for direct aid to freight and passenger transport companies, the amount of which varies depending on the type of vehicle: 1,250 euros per truck, 900 euros per bus, 500 euros per van and 300 euros per taxi, VTC or ambulance.

In addition, the term for refunding the tax on hydrocarbons is shortened, from three months to just one month. And the Government is committed to approving a law that guarantees carriers to work at a fair price, without incurring losses for a service, as already agreed in the agreement with the majority employers in the sector. It is intended to be similar to what has already been done with farmers and ranchers with the Food Chain Law.

With this package, the Executive promotes a new national cybersecurity plan, endowed with more than 1,000 million euros, which includes some 150 essential actions. To this end, a cybersecurity operations center will be set up for the General State Administration and its public bodies. And the security of the new 5G communications networks will be strengthened.

Actions on the energy market

After the European summit last week in which the Iberian exception was recognized, Spain and Portugal have to present to the European Commission an exceptional and temporary measure to set a reference price for gas used for generation electrical. It will be Brussels that has to give the green light to the modification and it is estimated that the entire process will be carried out in a period of between three and four weeks.

The shock plan includes an update of the specific remuneration regime for the production of electrical energy from renewable energy sources, cogeneration and waste. With this, according to the Government’s calculations, a reduction of up to 55% in electricity system charges will be achieved in 2022, for some 1,800 million euros. In addition, the mechanism to reduce excess profits in the electricity market caused by the high price of natural gas in international markets is extended until June 30. “In the signing of new electricity contracts or updating, quantitative limits should be set,” explained Teresa Ribera, third vice president and minister for the Ecological Transition, at the press conference after the Council of Ministers. That is to say, it will mark a ceiling that cannot be exceeded between 67 and 70 euros. In addition, other regulatory measures are approved to promote and accelerate the deployment of renewable energies, energy savings and to guarantee supply.

What does the labor law say about heat? Who is responsible for an accident? Keys on working in full sun | Economy

Wikileaks: López Obrador asks to “dismantle the statue of liberty” if the US condemns Julian Assange

Orlando Jorge Mera, the guardian of the environment assassinated in the Dominican Republic | International
June 8, 2022

Orlando Jorge Mera, the guardian of the environment assassinated in the Dominican Republic | International

Schwedt, the German city that lives clinging to Russian oil | International
May 20, 2022

Jeannette Vega: Contacts between a minister and a radical Mapuche leader precipitate the first casualty in Boric’s Cabinet
August 26, 2022

Jeannette Vega: Contacts between a minister and a radical Mapuche leader precipitate the first casualty in Boric’s Cabinet

Europe: The EU is already preparing emergency plans in the face of the risk of new Russian gas cuts | International
June 24, 2022

Europe: The EU is already preparing emergency plans in the face of the risk of new Russian gas cuts | International

Ketanji Brown Jackson: America Appoints a Black Woman as a Supreme Court Justice for the First Time in Its History | International
April 7, 2022

Ketanji Brown Jackson: America Appoints a Black Woman as a Supreme Court Justice for the First Time in Its History | International

Neither reunification with China nor independence: Taiwanese prefer to stay as they are | International
August 13, 2022

Neither reunification with China nor independence: Taiwanese prefer to stay as they are | International

Layoffs and suspicions: the selection process of the companies that will exploit lithium in Bolivia | International
June 8, 2022

Layoffs and suspicions: the selection process of the companies that will exploit lithium in Bolivia | International