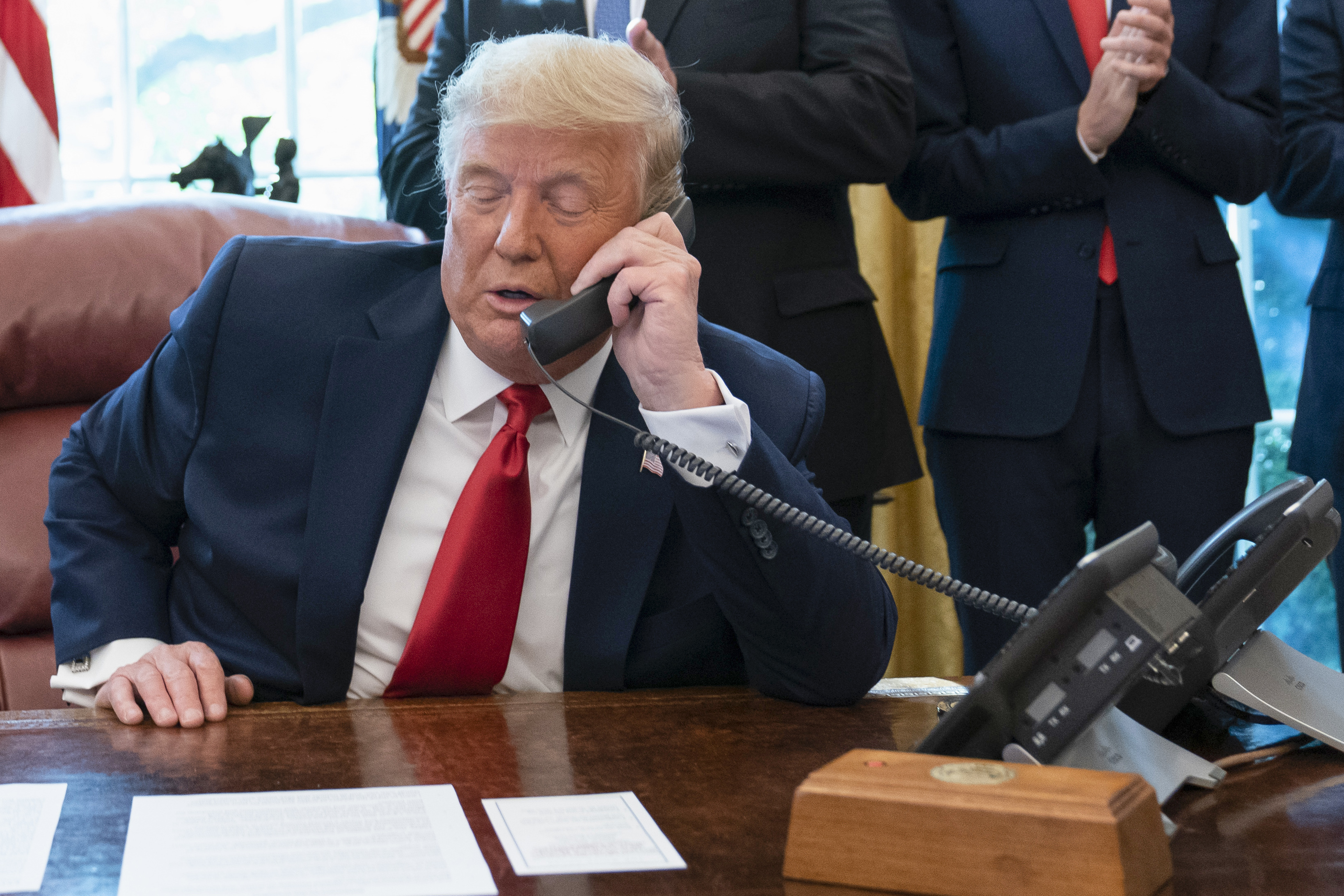 Who did Donald Trump call between 11:17 and 18:54 on January 6, 2021? Who did he talk to as the attack on Capitol Hill that he himself had instigated at a previous rally with thousands of his supporters unfolded? There is no answer to those questions in the White House files. The commission of the United States Congress that tries to reconstruct what happened that day has found a hole in the telephone records of the then president, according to a joint exclusive from the newspaper Washington Post and the television network CBSNews. More than seven and a half hours. 457 minutes. An eternity for investigators, during which the seat of democracy in Washington was violently assaulted by a mob, and Vice President Mike Pence and congressmen had to seek refuge.

Does that mean that Trump destroyed those call records, which the Supreme Court forced him to turn over last January with the rest of the presidential documents? It is one of the hypotheses that are considered. Another is that the president was able to use different phones to communicate with his collaborators, which is prohibited by law. What seems clear is that he did not remain silent. The data on the calls sent or received by the White House switchboard occupy 11 pages, confirming that the tycoon had an intense telephone day during the rest of the day. He phoned eight people in the morning and 11 at night, before and after the hole that has now become known. In addition, there is public evidence that during those seven hours he communicated or attempted to communicate with, at least, the Republican senators Mike Lee (Utah) and Tommy Tuberville (Alabama), as well as with the minority leader of the House of Representatives, fellow Republican Kevin McCarthy (California).

In the surviving records of the sixth of January, which can be found here, It is known that Trump spoke or asked to speak with some of the main actors in the plot: his adviser Steve Bannon, who turned himself in to the FBI in November after being accused of contempt of Congress for not appearing before the commission investigating the attack on Capitol Hill; the lawyer Ruddy Giulianni, summoned to testify for having promoted false theories about the alleged electoral fraud and his chief of staff, Mark Meadows, who is known to have been pressured by Ginni Thomas, wife of Supreme Court Justice Clarence Thomas, to do everything possible to reverse the electoral victory. Also, with Kentucky Senator Mitch McConnell, leader of the Republicans in the Senate, and with then-Vice President Mike Pence, whom he intended that day to prevent, using powers that it is not clear who possesses that position, the transfer of legitimate powers to the winner of the November 2020 elections, Joe Biden.

The January 6 committee is investigating whether in those seven hours, Trump communicated through other channels, his aides’ phones or disposable terminals, according to the news from The Washington Post, signed by the venerable Bob Woodward, who uncovered the Watergate scandal with Carl Bernstein half a century ago, and Jim Costa, political correspondent for CBSNews. Together they launched at the end of last year profile (which Roca Editorial plans to publish in Spanish under the title of Danger), about the bumpy transition between Trump and Biden. The Republican still maintains, without evidence, that the 2020 election in which he lost the White House was stolen from him.

Trump did not distinguish himself during his presidency by respecting the Presidential Records Act, which determines that these communications are the property of the State, and not of the tenant of the White House. In February it was learned that, upon leaving office, he took classified documents and information valuable to national security to his mansion in Mar-a-Lago, Florida, as confirmed by the National Archives and Records Administration (NARA). in English). It was also usual, according to his Administration sources, for him to use different telephones to communicate with his officials, who received calls from the White House switchboard or from different numbers. Sometimes, the president’s voice sounded after picking up a hidden number.

In a statement, Trump said late Monday: “I have no idea what a burner phone is, to my knowledge, never heard of such a thing.” A spokeswoman for the tycoon explained to Woodward and Costa that he had not had anything to do with the manipulation of the records and that, as far as he knows, all his calls were recorded and preserved.

The week began for the former president with the news that a federal judge, David Carter, considers “more likely than not” that Trump and John Eastman, one of his legal advisers, whom Carter has forced to deliver more than a hundred emails emails to the committee on January 6, “conspired” to avoid the certification of votes in Congress. The day of the assault on Capitol Hill, Trump pressured Vice President Mike Pence with that rally in Washington to use his position to not validate the Democratic victory, a process that is usually a mere democratic procedure and that day became one of the episodes blackest in recent US history.

War in Ukraine: Russia attacks a school in Mariupol where 400 people were sheltering | International

The drug addicts of the hills of Kabul, in pictures

Schwedt, the German city that lives clinging to Russian oil | International
May 20, 2022

Plebiscite 2022 for the new Constitution of Chile, live | Chile closes the polls and begins the counting of votes of the plebiscite
3 weeks ago

Plebiscite 2022 for the new Constitution of Chile, live | Chile closes the polls and begins the counting of votes of the plebiscite

The White House tries to put out the fire that Biden caused by saying that Putin cannot continue in power | International
March 27, 2022

Karl Nehammer: The Austrian Chancellor will meet with Putin in the midst of a European offensive to expand sanctions | International
April 10, 2022

Karl Nehammer: The Austrian Chancellor will meet with Putin in the midst of a European offensive to expand sanctions | International

A century of celebration of the culture of Native communities in the United States
August 16, 2022

Magdalena Ruiz Guiñazú, one of the most influential journalists on Argentine radio, dies
3 weeks ago

Magdalena Ruiz Guiñazú, one of the most influential journalists on Argentine radio, dies

Jonas Lucas Alves Dias: Murdered after an extortion attempt a Brazilian who became a millionaire by winning the lottery | International
6 days ago

Jonas Lucas Alves Dias: Murdered after an extortion attempt a Brazilian who became a millionaire by winning the lottery | International

Boris Johnson resignation: How do you choose a new conservative leader? | International
July 7, 2022

Boris Johnson resignation: How do you choose a new conservative leader? | International