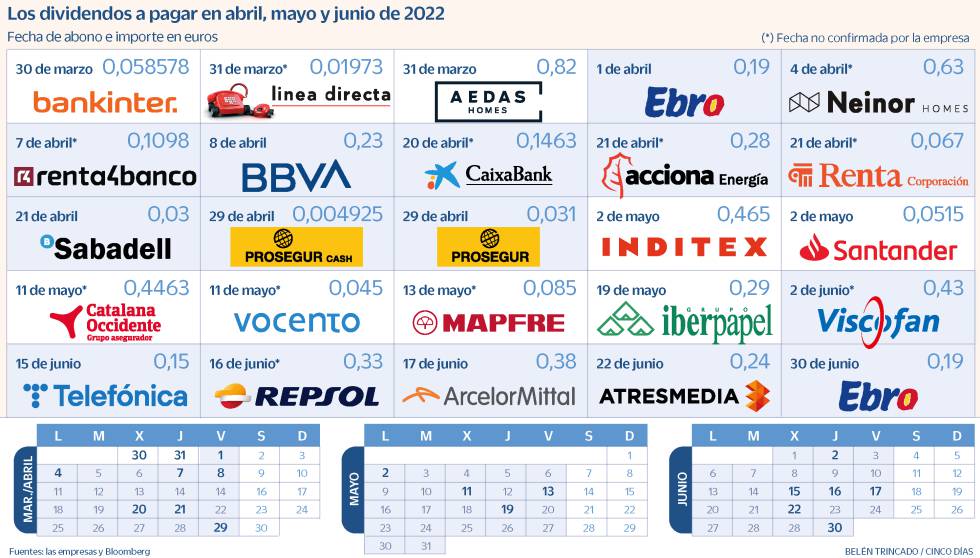 Pampering shareholders has always been a priority for listed companies, but in turbulent times for markets such as the current ones with a war in Ukraine and high inflation levels, it becomes more relevant. Thus, in the next three months, around 25 Spanish listed companies will pay their shareholders via coupon payments. In total, around 8,000 million euros will be distributed with these distributions.

Patricia García, founding partner of MacroYield, believes that companies will try to maintain their dividends, after having reported very good results in 2021, and being aware that investors keep remuneration policies on the investment radar due to their attractiveness in a context of high inflation. But she also warns that “some European banks, or other companies with greater exposure to the Russian economy, could be the first to show the leg of the dividend cut” taking into account the current situation. At the moment, spring arrives loaded with paid numbers.

The largest disbursements, as usual, will be for the large Ibex companies. In this way, and after two years in which the shareholder remuneration policy was conditioned by the restrictions in this regard imposed by the ECB as a result of the crisis generated by the pandemic, on April 8, BBVA will make the payment of a coupon of 0.23 euros gross per share, which will mean a disbursement of 1,533 million euros among its shareholders.

This is the second payment that the financial entity, chaired by Carlos Torres, makes from the results of 2021. The first of them was made effective on October 12 and the amount amounted to 0.08 euros gross.

Inditex will be in charge of making the second largest disbursement, specifically 1,499 million. This coupon will be distributed, as usual in the company, in the first days of May. Specifically, the textile group will pay an ordinary interim dividend for 2021 of 0.465 euros gross per share on May 2.

Another bank occupies third place and is in the club of 1,000 million since with this next distribution it will deliver 1,179 million euros among its shareholders. Although the exact date of payment is not confirmed, market sources believe it will be around April 20 and the amount of the coupon amounts to 0.1463 euros gross per share. CaixaBank’s board approves a dividend of 0.1463 euros. With the payment of this dividend, the amount of the shareholder remuneration corresponding to the 2021 financial year will be equivalent to 50% of the consolidated net profit, adjusted for the extraordinary impacts related to the merger with Bankia.

For its part, within the energy sector, Repsol will disburse some 500 million euros with the payment it will make in April (with an undetermined date) but with an amount of 0.33 euros gross per share. Shareholder remuneration is one of Repsol’s priorities, as evidenced by the fact that, on October 28, the company announced an improvement in the cash dividend in 2022 of 5%, to 0.63 euros per share , as well as a reduction in share capital, through the redemption of 75,000,000 treasury shares, equivalent to 4.9% of the company’s capital. With this, the company advances by one year the stage of increasing dividend provided for in its 2021-2025 Strategic Plan, which established this phase as of 2023, and also anticipates the commitment to repurchase shares provided for in the Strategic Plan.

Another bank pays this week, specifically on Thursday 30. Bankinter will disburse 430 million euros with a distribution of 0.058578 euros per share, corresponding to the 2021 financial year.

Sabadell will also reward the loyalty of its shareholders in the coming days. The Catalan bank will distribute 0.03 euros gross per share in April.

The insurers Mapfre and Catalana Occidente also have coupon distribution pending. They will do so in April, according to the market forecast on May 13 and 11, respectively, with amounts of 0.085 and 0.44634 euros gross per share.

Direct line. The insurer, which in a few days will be a year since it made the leap to the Stock Exchange and became ‘independent’ of its parent Bankinter, will pay a dividend on March 31, according to analyst forecasts.

Activate Energy. Another of the securities that debuted on the floor in 2021 rewards its shareholders in the coming days. The renewable energy company distributes 0.28 euros per share, according to estimates.

Prosegur and Cash. The two companies distribute coupons on the same day, April 289. In the case of the first, the amount is 0.031 euros and in the second, 0.004925 euros gross per share.

From the social state of law to the end of the Senate: keys to the new Chilean constitutional text
July 4, 2022

From the social state of law to the end of the Senate: keys to the new Chilean constitutional text

War in Ukraine: Putin apologizes to Israel for Lavrov’s anti-Semitic remarks | International
May 5, 2022

Alejandro Giammattei assures that Guatemala will not participate in the Summit of the Americas | International
May 18, 2022

Stories of those who escaped from Mariupol: “There is nothing left. Everything has turned to dust” | International
March 20, 2022

Stories of those who escaped from Mariupol: “There is nothing left. Everything has turned to dust” | International

Waiting for weapons on the Luch front: “Not even my commander has a decent machine gun” | International
May 15, 2022

Waiting for weapons on the Luch front: “Not even my commander has a decent machine gun” | International

Texas shooting: Reconstruction of a massacre: the morning of fury that broke Uvalde | International
May 26, 2022

Educational reform: The kids of the populace | Opinion
April 8, 2022

Educational reform: The kids of the populace | Opinion

Cristina Kirchner: What a mess is going to be made
September 2, 2022

Cristina Kirchner: What a mess is going to be made