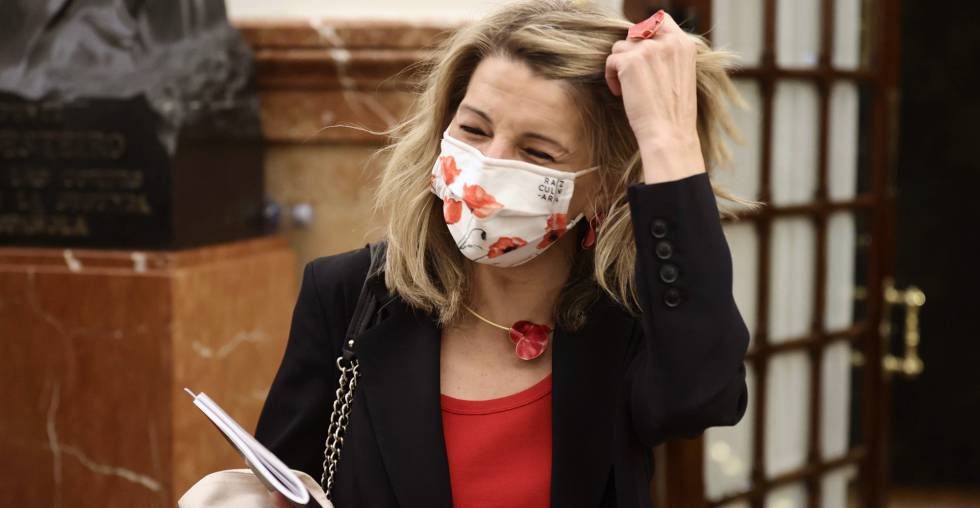 The Second Vice President of the Government and Minister of Labor, Yolanda Díaz, gave some clues yesterday about the measures of a labor nature that her department would be thinking about to include in the national response plan against the war in Ukraine and the price crisis that the Executive will approve next Tuesday.

Specifically, Labor is considering the possibility of recovering the prohibition of objective dismissals motivated by the current crisis derived from the Russian invasion of Ukraine and its impact on the economy, as was already done with the Covid pandemic, when The Government prohibited contract terminations based on the health crisis. In addition, on this occasion, the possibility of establishing some additional limit to those already existing to lower wages in a company would also be considered.

This is clear from Díaz’s words yesterday in the Congress of Deputies, where he said that: “This is not the time to fire, this is what has given us results in the previous crisis, and it is not the time to lower wages” , according to Eph. And sources familiar with the work plans confirmed yesterday to this newspaper that this ministry would be studying these two measures.

The employers, who have already strongly rejected this measure during the pandemic, yesterday preferred not to evaluate the measure until it is firm and on the table, sources from business organizations indicated.

The royal decree law of March 27, on labor measures to combat the effects of the pandemic, introduced the prohibition of objective dismissal motivated by the health crisis. Thus, this rule indicated that the force majeure and the economic, technical, organizational and production causes underlying the measures to suspend contracts and reduce working hours that had been approved days before (March 17) “are not They may be understood as justifications for the termination of the employment contract or dismissal.

This rule – which has lasted until February 22 – has given rise to numerous and, some of them, contradictory judicial decisions, which have considered some of these dismissals inadmissible or null. Although, recently the Supreme Court has ratified the nullity of a collective dismissal during the pandemic, understanding that an adjustment of this type must be due to structural and not circumstantial causes during Covid-19.

Díaz supported new limitations on layoffs and salary reductions given the evidence, in addition, that 2021 has been a year in which listed companies obtained “record profits” of 64,000 million euros. “Nobody would understand that, in a crisis situation, with those benefits they would lower wages. The effort must be collective”, he claimed. Thus, the vice president confirmed that in the package of measures that will be approved in the Council of Ministers next Tuesday, March 29, there will be a part dedicated to labor stockings.

Although he did not specify what his department is thinking about to limit salary drops. There are currently two ways to modify salary conditions: the one known as the

“article 41” of substantial modification of working conditions –in which the company must negotiate the measure with the legal representation of the workers– or the non-application of a sectoral agreement, more oriented to suspending an agreed wage increase or other improvements.

Along with this, Díaz recalled that the new temporary employment regulation files (ERTE) called the Red Mechanism are already in force, although it would be necessary for the Executive to activate them in the Council of Ministers. At the moment, the Government only planned until last week to activate a Red ERTE – which can be sectoral or cyclical, temporary – of a sectoral type for travel agencies, which still have one in four employees in a Covid ERTE. However, the Government could also consider activating the cyclical ERTE Network in the face of the current crisis, but that has not yet been even pointed out by those responsible for the Executive.

However, companies can also resort now – without the need for the Council of Ministers to activate them – to the usual ERTEs for economic, technical, organizational or production reasons (ETOP) which, since the labor reform, have new requirements , although these have less aid for companies. For this reason, he has asked companies and workers for “calm and tranquility”.

Outside his powers, Diaz yesterday also defended measures to contain increases in rental prices, since current legislation provides for the possibility of revaluations of these rents according to the evolution of inflation, at its highest level in 30 years. Thus, he assured that revaluing rents with the CPI at this time would mean “a generalized impoverishment,” he said, pointing to another possible shock measure that would correspond to the approval of the Ministry of Transport, Mobility and Urban Agenda.

A judge stops the fine of 9,000 million pesos to Iberdrola in Mexico

Simulator: How to calculate the mortgage payment that suits me best? | be where you are

Video | Why does Putin invoke Nazism to invade Ukraine? | International

A bloody awakening in the Canadian barn | International
3 weeks ago

A bloody awakening in the Canadian barn | International

War in Ukraine: The videos that show that Russia is lying about the Bucha massacre | Videos
April 6, 2022

War in Ukraine: The videos that show that Russia is lying about the Bucha massacre | Videos

Haidi Matar,: Man arrested for stabbing Salman Rushdie will remain in jail without bail after pleading not guilty | International
August 19, 2022

Haidi Matar,: Man arrested for stabbing Salman Rushdie will remain in jail without bail after pleading not guilty | International

Ukraine combs the liberated areas in search of pro-Russians | International

The street escalation of Kirchnerism cracks the opposition in Argentina
August 30, 2022

The street escalation of Kirchnerism cracks the opposition in Argentina