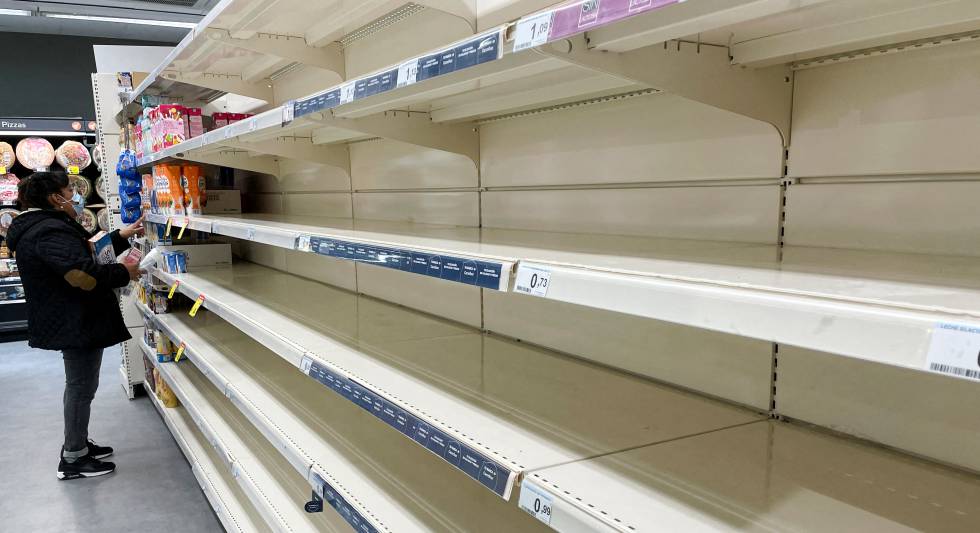 The growing impact that the truckers’ strike is having on the food industry, visible on supermarket shelves, has already caused the first factory closures. And if the situation continues, the sector warns that it will have to resort to the ERTE tool to reduce the bill they are assuming for this crisis.

This is openly recognized by the main associations in the sector, which are beginning to feel significant stress in the food chain after more than 10 days of strike. Only food distribution companies accuse daily costs of 130 million, which raises the bill up to now to 1,300 million.

But it is the industry that threatens to stop the activity of the factories due to the impossibility of supplying raw materials and the elements necessary for production, in addition to not being able to dispose of the stored product, which accumulates with each passing day.

“The situation is very serious, the chain is more stressed than in the worst moments of the pandemic, and it affects all sectors: dairy, canned meat, water, beer, flour…”, described the director general of FIAB, Mauricio García de Quevedo, who at a press conference with the main associations in the sector, warned that those companies that have to cease their productive activity will have no other option than to apply ERTE. “If this goes on, there will be no other. There are already companies that are looking at it,” he said.

“It is a tool that companies have. As we have seen in the Covid, if a company is forced to stop, they have that ability to decide,” said José María Bonmatí, general director of Aecoc, the employer’s association, along the same lines. great consumption.

Yesterday, Danone confirmed what was announced on Tuesday and began to paralyze activity in its factories. He did it in two, one dedicated to dairy products and another to water, although he did not specify which of the seven plants he has in Spain. In the second he managed to resume activity in the afternoon, given the variability of the situation.

Two others are at risk of making a similar decision. In the rest, milk is still being collected and some minimum services are maintained for the supply of raw material. Company sources indicated that, at the moment, the possibility of applying an ERTE in factories that are closing is not being handled.

Another of the large companies that have had to stop their activity in recent days is the Calvo canning company. Its factory in Carballo (A Coruña), with 450 employees, ceased work on Monday, although in this case the execution of an ERTE is not contemplated either. “Other types of measures are being used in collaboration with the workers and their representatives,” company sources pointed out.

FIAB and Aecoc, together with the distribution employers’ associations, Asedas, ACES and Anged, and the Agrifood Cooperatives, as representatives of the primary sector, demanded an urgent solution from the Government. “The government has to have a sense of urgency and immediacy. The situation is unsustainable,” said García de Quevedo.

A shared message of urgency, as well as the call for responsibility to carriers. “All claims are legitimate, but not all ways of asserting them are,” said Aurelio del Pino, president of ACES, an association that represents companies such as Carrefour, Alcampo and Eroski. This has also extended the call for responsibility to consumers. “Massive stockpiles further complicate stock management.”

This, together with Asedas, which represents Mercadona and Dia, wanted to underline that the stores are not going to be empty of products, despite the fact that this Wednesday the joint statement from the associations spoke of a “clear risk of shortages.” they are looking for alternatives even under the stones so that no product is missed,” said Felipe Medina, general secretary of Asedas.

Inflation in the shopping basket: sole at 46 euros in the rich neighborhood; no fishmonger in the humble | Catalonia

Less industrial and more modern: this is how the ’21st Century Workers’ Statute’ should be | Economy

War in Ukraine: Life in a city taken over by the Russians is a pantomime of the life that was | International
March 13, 2022

War in Ukraine: Life in a city taken over by the Russians is a pantomime of the life that was | International

Elections in France: Le Pen arouses enthusiasm, but in Châteaudun they believe that Macron will win in the end | International
April 10, 2022

Elections in France: Le Pen arouses enthusiasm, but in Châteaudun they believe that Macron will win in the end | International

The trickle of new resignations puts Boris Johnson on the ropes | International
July 6, 2022

The health of the Pope unleashes the Vatican rumor mill | International
June 19, 2022

The health of the Pope unleashes the Vatican rumor mill | International