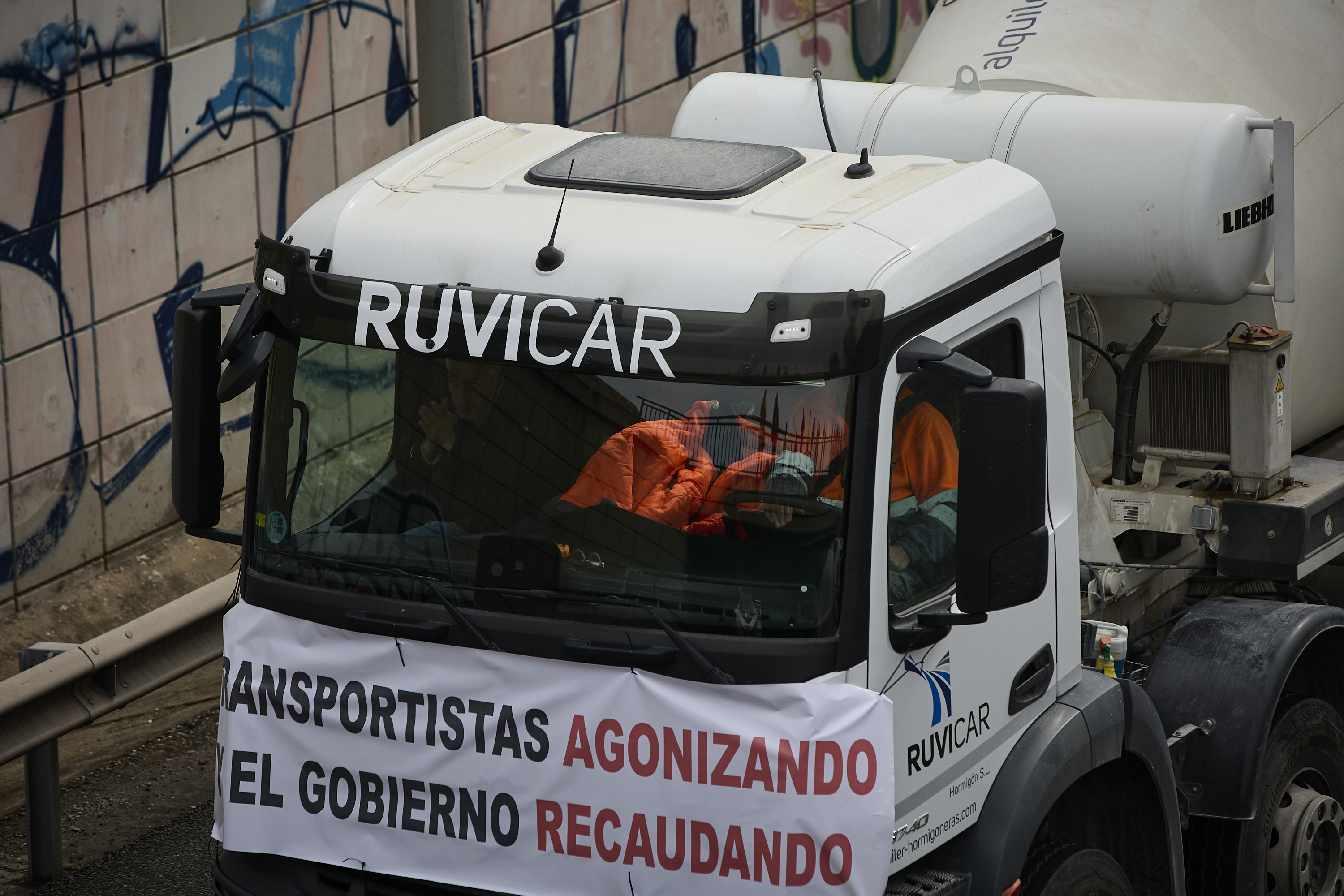 Since 11:30 this morning, the representatives of the National Committee for Road Transport, the body that represents the majority associations of carriers (CETM, Fenadismer, ACTE, Anatrans, Astic, Atfrie, Feintra, Feteia , Fetransa, Fitrans, FVET and UNO), with the first vice president of the Government and head of Economic Affairs, Nadia Calviño, the Minister of Finance, María Jesús Montero, and the head of Transport, Raquel Sánchez, to reach an agreement on the increase of the price of diesel and put an end to the transport strikes that began on March 14. The slogan that carriers and the Administration have repeated is that they will not leave the table until they have closed an agreement. “We are going to negotiate until the end”, has been the most repeated phrase of the different representatives at the entrance of the meeting.

Both parties are aware of the importance of the meeting, which the Government has described as “definitive”, and the carriers as “transcendental”, after several previous meetings in which positions were approached but without any specific proposal that would allow to stop the mobilizations. The President of the Government, Pedro Sánchez, has assured in Brussels that, from the negotiation this Thursday, a definitive agreement will come out that satisfies the demands of the carriers. “I am convinced that we will reach an agreement, because we have the will, we understand their demands and we will do everything in our power to reach an agreement. We are going to sit down and we are not going to get up until we achieve it”, said Sánchez.

José María Quijano, general secretary of CETM, the majority employer in the field of goods, has defended at the entrance of the meeting that the best way to help the sector right now is through “direct aid to companies” for a period of months to be determined, and not via a reduction in the taxes levied on fuel. “We trust that an agreement will be reached today. In the last meetings they already advanced these measures, quantifying them in a global figure —500 million euros— and today we want them to tell us how they are going to be applied”, he pointed out. For his part, Julio Villaescusa, the representative of Fenadismer —the second most important association—, pointed out moments before entering the meeting that the will of the entity is to “fix this enormous problem”, and for this he will not get up from the table “until there is an agreement”.

However, Manuel Hernández, the president of the National Platform for the Defense of Transport, convener of the strike, has “totally” ruled out calling it off, no matter what happens at the meeting that the Government holds this Thursday with the CTNC, considering that the truckers and “base” drivers are not represented in it.

“Until I sit down with the minister [de Transportes], the strike is not called off”, warned the president of the platform, who has also stressed that they are not claiming “neither subsidies nor alms”, alluding to the 500 million euros in aid that the Government has initially proposed to grant to alleviate the rise in fuel prices. The Platform, to which the Government has denied from the beginning to participate in the negotiations considering that it is not a valid interlocutor, has called for this Friday a demonstration in front of the Ministry of Transport that it hopes will be “massive”.

From United We Can, government partners of the PSOE, they have also distanced themselves from the official position and have asked that the Platform be taken into account. The Second Vice President of the Government and Minister of Employment, Yolanda Díaz, has refused to label carriers who have been unemployed for a week as “extreme right” and has assured that they are “the most vulnerable” within the transport chain, They have been working at a loss for a long time. Faced with the position defended a few days ago by the Minister of Transport and other socialist members of the Government, who “came to describe these carriers as extreme right-wingers and play the game of Putin”, the purple vice president has marked distances by rejecting that label.

While they negotiate an agreement, demonstrations and acts of protest continue. Around 350 container carriers, according to data from the Guardia Urbana, have gathered this Thursday in Barcelona to demand that the Government carry out the measures announced to solve the rise in fuel prices. Since it began, the carrier strike has reached the figure of 67 detainees and 6,969 convoys of trucks with goods and goods escorted by the State Security Forces and Bodies, according to the Ministry of the Interior.

The strike celebrates 11 days this Thursday and the situation worsens with each passing day in supermarkets, food manufacturers, cooperatives, hoteliers and companies in the most affected sectors, with increasingly important supply problems. The food industry has asked the Government to act quickly to agree on a way out of the crisis that, according to the sector, is blocking the country’s economy. Mercedes and Legumbres Luengo have joined the list of companies that have had to temporarily close some plants or have announced that they will do so in a few days, if the stoppages continue. The plant of the German automobile group in Vitoria, which directly employs 5,000 people, will stop again on Monday due to the uncertainty regarding the supply of parts. Last Monday there was already another break in Mercedes for the same reason.

The strike has also led Legumbres Luengo to interrupt the activity at its facilities in Riego de la Vega (León), due to the limitations to load certain products and to supply raw and auxiliary materials, such as jars, pallets and various packaging materials. . “The activity of the factory will remain interrupted until the materials and factors necessary for its activity can be re-established,” the company explained.

Another sector affected is oil. Oleoestepa, the largest olive oil production factory in the province of Seville, with seven million olive trees, will close its central bottling plant in Estepa this Friday and stop producing oil due to the impossibility of having raw material due to the strike of the transport. The company maintains activity at 50% in the bottling area, although it suffers from a significant lack of bottles, boxes or corks.

The fear of shortages grows. Going to the supermarket and seeing some empty shelves, especially in the case of milk, oil and flour, is becoming more and more common. The food sector, which insists that at least for now the shortage problems are punctual and manageable, although with a high extra cost for supermarkets (130 million euros per day), has called on consumers not to make massive purchases in weekend doors to avoid shortages. This has been stated by the Director of Competitiveness and Sustainability of the Federation of Food and Beverage Industries (FIAB), Paloma Sánchez Pello, for whom the situation is “very complicated”. “People are nervous about the possibility of shortages, the problem is very complicated, but the sector is responsible and has shown it throughout the pandemic and will try by all means to supply whenever it can,” she said in statements to Telecinco .

The situation is beginning to be “critical” in the ports, as the presidents of the port authorities of Algeciras, Barcelona, ​​Bilbao and Valencia have agreed to point out this Thursday. The president of the Algeciras Authority, Gerardo Landaluce, has described the situation in this port as “limited and very delicate”, in an informative breakfast organized by Port Journal. He has specified that this crisis “is not only experienced in the ports, but throughout the country as it affects the entire logistics chain and the industrial belt.”

Damiá Calvet, from the port of Barcelona, ​​has described that the terminals are “at full capacity” and has pointed out that if containers do not leave “we are going to have to stop port and maritime activity”. According to the figures that he has provided, the movement of daily trucks last Wednesday at the port varied between only 15% and 20% of normal activity, which in his opinion is “very worrying.”

When renting an apartment is no longer so easy: the neighbor on the fifth floor has a tough competitor and it is a company | Business

Today’s ephemeris: What happened on October 3?
29 mins ago

By admin
Recent Posts
Latest News
Facebook Twitter WhatsApp Telegram
Back to top button
Close
Featured Posts
Brussels proposes a reconstruction plan for Ukraine to accelerate its integration with the EU | International
May 19, 2022

Draghi, another crack in the European wall | International
July 17, 2022

Draghi, another crack in the European wall | International

Collaborating with the enemy, the suspicion that poisons the people of Ukraine | International
April 30, 2022

Collaborating with the enemy, the suspicion that poisons the people of Ukraine | International

Argentina: Gabriel Boric in Buenos Aires: tours of the bookstores and a haircut | International
April 6, 2022

Argentina: Gabriel Boric in Buenos Aires: tours of the bookstores and a haircut | International

Frantz Fanon: a classic to understand or colonialism | Culture
March 10, 2022

Frantz Fanon: a classic to understand or colonialism | Culture

The FBI searches the mansion of Donald Trump in Florida in search of evidence of a possible crime | International
August 9, 2022

Summit in Madrid: NATO speeds up the path of rearmament in the face of new threats | International
July 1, 2022

Summit in Madrid: NATO speeds up the path of rearmament in the face of new threats | International