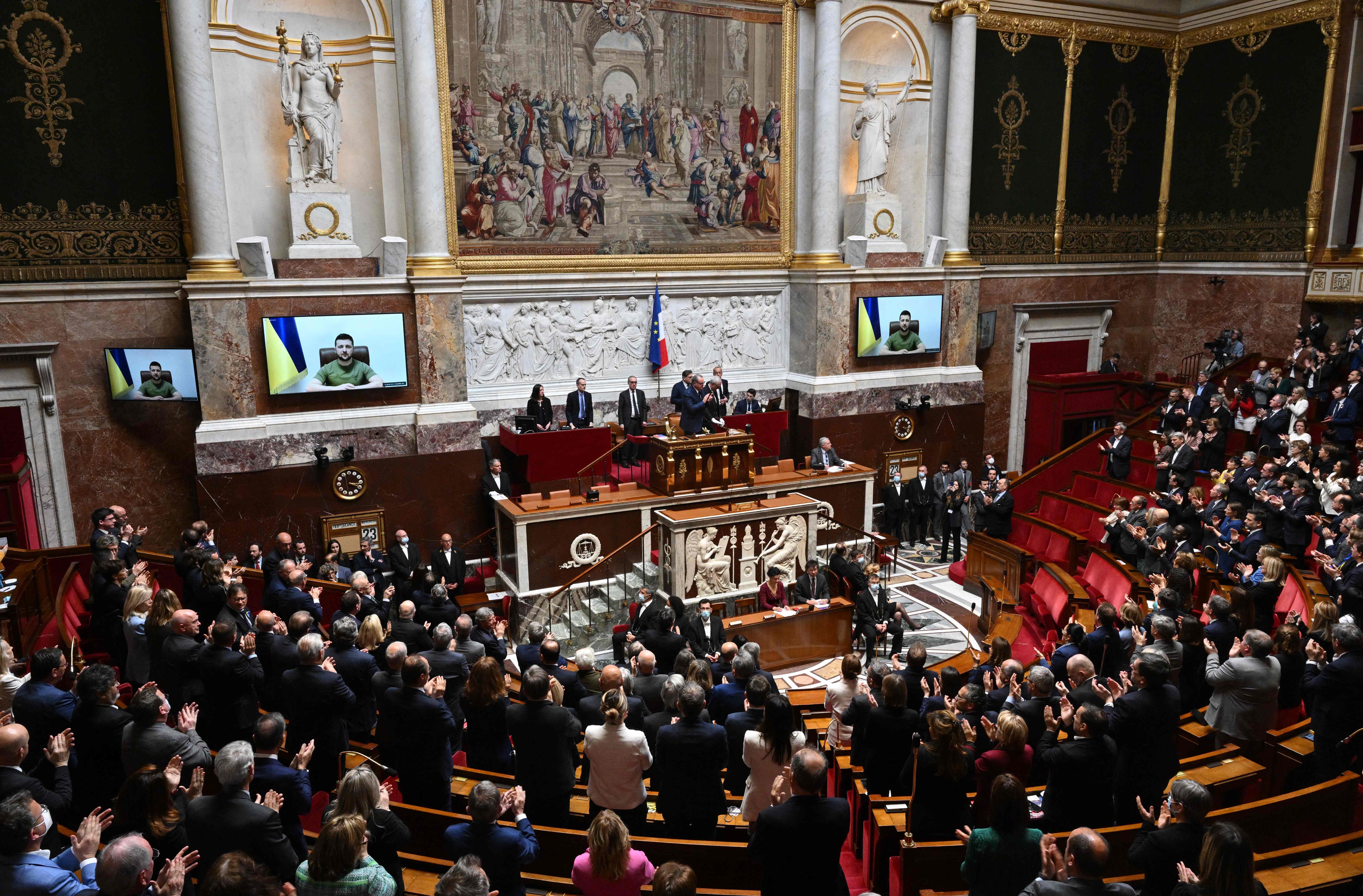 Ukrainian President Volodymyr Zelensky launched a depth charge on Wednesday against some leading companies of French capitalism that, in his opinion, are complicit in Russian war crimes in Ukraine. Zelensky, in a videoconference speech before the French National Assembly and Senate, urged these companies — among which he cited the carmaker Renault and the commercial chains Auchan and Leroy Martin — to leave Russia.

“French companies must leave the Russian market: Renault, Auchan, Leroy Merlin and others must stop being sponsors of Russia’s war machine,” Zelensky said from an office in Ukraine, dressed in the usual military shirt he has worn since he A month ago your country was invaded by Russia. The president added: “They must stop funding the murder of women and children and rape. Everyone must remember that values ​​are worth more than benefits.”

The accusation is serious. It coincides with criticism of the French energy giant Total Energies so that, as other multinationals in the sector have done, it withdraws completely from Russia. The environmentalist candidate for the presidential elections on April 10 and 24 in France, Yannick Jadot, has accused Total of “complicity in war crimes”. Total has denounced Jadot for “defamation”. The president of Total, Patrick Pouyanné, declared on the RTL chain that the decision to cut off the energy supply from Russia corresponds to the European governments, and not to his company.

Pressure is mounting on French companies that are reluctant to leave Russia. Ukrainian Foreign Minister Dmitro Kuleba has called for a boycott of Renault. Following Russia’s bombing of a Leroy Merlin store in kyiv on Sunday, Ukraine’s Defense Minister wrote on Twitter: “Leroy Merlin has become the first company in the world to finance the bombing of its own stores and the murder of their own employees. Horrible, inhuman greed.”

In a statement published by Agence France Presse, Adeo – the company that owns Leroy Merlin – rejected Zelenski’s request before French parliamentarians and declared that it will continue in Russia, although it has suspended new investments in that country. Adeo maintains that closing the doors in Russia would be equivalent to “a premeditated bankruptcy” that “would open the way to an expropriation that would strengthen Russia’s financial means.”

As in other speeches to Parliaments of other democracies (the United Kingdom, the United States, Germany, Israel, Italy), the Ukrainian president appealed before the National Assembly and the Senate to the history of the country to which he was addressing. In the French case, to the battle of Verdun during the First World War, to the republican motto of “liberty, equality, fraternity” and even to a figure of popular culture like the actor Jean-Paul Belmondo.

Zelensky also addressed the Japanese parliament on Wednesday. And he adapted his message to that country. To warn of the nuclear and chemical threat in Ukraine, he invoked the memory of the catastrophe at the Fukushima nuclear power plant in 2011 and the sarin gas attack in the Tokyo subway in 1995.

Before the French parliamentarians, Zelensky criticized the country’s politicians, some of them sitting in the hemicycle, “who hide their heads in the sand and look for money in Russia.” It was an allusion, without quoting her, to Marine Le Pen, a far-right candidate for the April presidential election, who in the past financed her campaign with a loan from a Russian bank. He also praised the French president, and candidate for re-election, Emmanuel Macron: “She has shown true leadership, we communicate constantly”.

How much does a senator earn, what is his function and what other jobs can he do?

Berta Valle: “Daniel Ortega’s repression has left the opposition without a voice in Nicaragua” | International

Uyghurs: The UN believes that China may have committed crimes against humanity by repressing the Uyghur minority | International

What we can know about the Russian strategy in Ukraine | International
March 21, 2022

What we can know about the Russian strategy in Ukraine | International

Ukraine: UN inspectors arrive in Zaporizhia: “Our mission is to prevent a nuclear accident” | International
August 31, 2022

Ukraine: UN inspectors arrive in Zaporizhia: “Our mission is to prevent a nuclear accident” | International

The “no to war” in Ukraine of a journalist on Russian television goes viral | International
March 15, 2022

Argentina seizes the Venezuelan cargo plane held in Buenos Aires at the request of the US | International
August 12, 2022

War in Ukraine: How Social Media Photos Can Help Bring Putin to The Hague | Videos
April 18, 2022

War in Ukraine: How Social Media Photos Can Help Bring Putin to The Hague | Videos

Mafiosi and Kremlin assistants: the secret route of Russian money in Andorra | International

War in Ukraine: Malnutrition strikes the poorest in Africa | International
May 14, 2022

War in Ukraine: Malnutrition strikes the poorest in Africa | International

The Conservative Party explores how to speed up Boris Johnson’s departure from Downing Street | International
July 8, 2022

The electoral campaign in Colombia is tense due to inconsistencies in the pre-count of votes and allegations of fraud | International
March 20, 2022