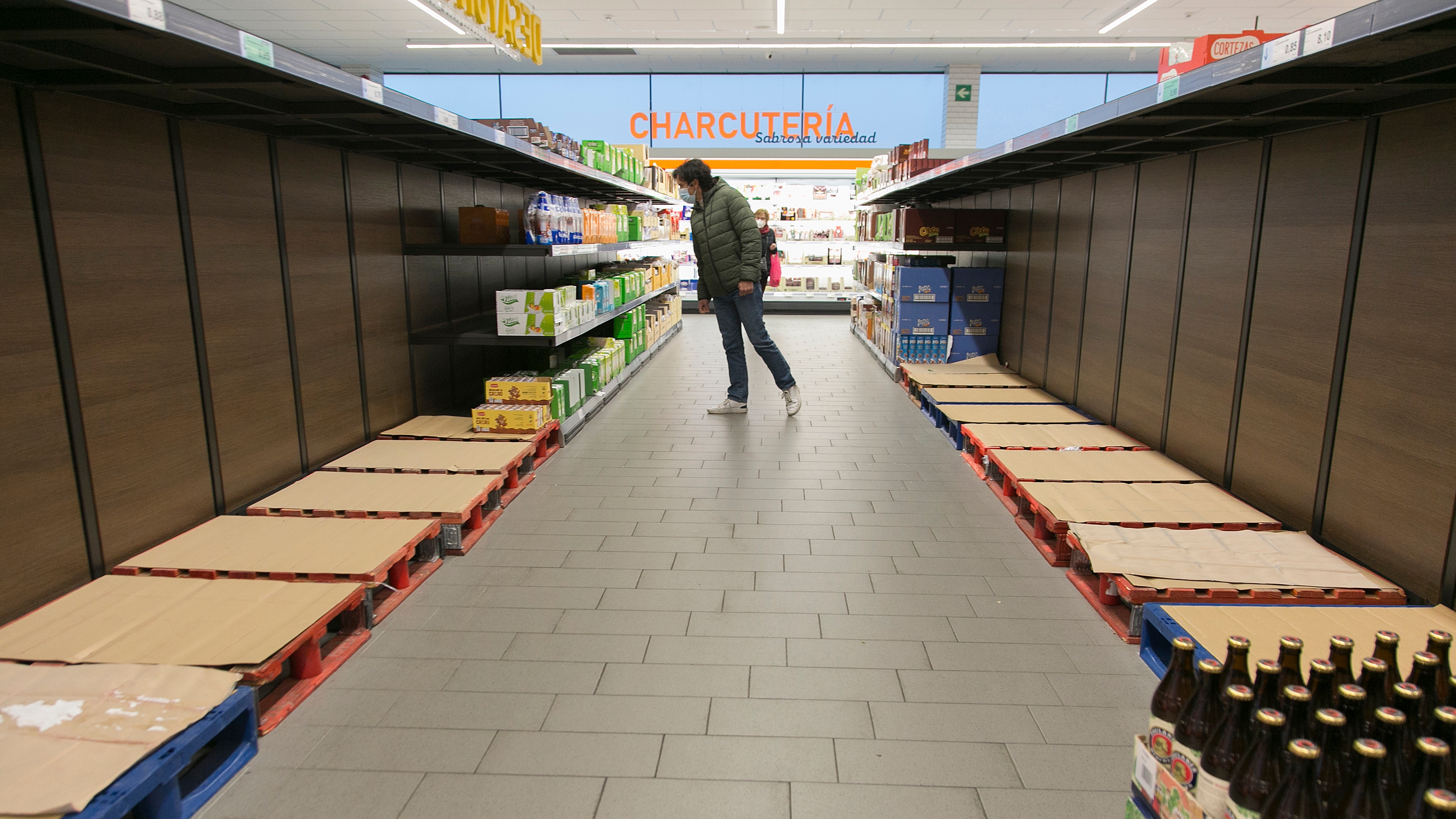 First it was the hoarding of toilet paper during the pandemic. Then, the problems in the global supply chain due to the collapse of ports and the lack of ships. Later, a new panic buying movement with sunflower oil as the protagonist due to the war in Ukraine, where cereal crops have been buried under military machinery. And now, a transport strike that is making it difficult to deliver a product as basic as milk, and threatens to hit a good part of the food industry and drive prestigious international companies, such as the French Danone or the Dutch Heineken, if a solution is not found soon.

The supermarket, once the peaceful place to fill the pantry every week, has recently become an unexpected thermometer of the times. Among its corridors it is possible to witness, as in few places, the consequences of macroeconomic dysfunctions —inflation—, commercial —bottlenecks— and geopolitical —the Russian invasion—. At the moment, the distribution bosses insist that there is no generalized shortage, but concern is growing because the distribution problems due to the outbreak of unrest among truckers are joined by the stockpiling effect of consumers, who buy more before the Fear of shortage.

The Minister of Agriculture, Fisheries and Food, Luis Planas, defends that the lack of some product in supermarkets has been “occasional”, and blames them on the high purchases by customers who hoard products. The data he handles supports this thesis: last week purchases were 20% higher than a year ago. The situation of the strike is however uneven: several sources indicate that the problem is greater in communities such as Galicia, Asturias, Cantabria and Andalusia.

In this last region, the products that are most scarce on supermarket shelves are those of a perishable nature. Dairy products, oils, eggs, flour, sugar, fruits, vegetables, meat and fish. “There was an extraordinary stockpile over the weekend, and the lack of certain products has been felt especially on Monday and Tuesday in wholesale, retail and hospitality channel establishments,” explains Álvaro González, general director of the Confederation Andaluza de Empresarios de Alimentos y Perfumería (CAEA), who warns that “the situation is unsustainable”.

And more so in Andalusia, he points out, because there are 280,000 livestock, fishing and agri-food productions at origin that do not receive raw materials and cannot send their products to logistics platforms and the wholesale channel. Weekend calculations estimated losses in the food chain at 120 million euros (20% of the Spanish total), explains González, although the vice president of the Board, Juan Marín, increased losses to 600 million. “We are trying to get our products around pickets, slow marches… but many truckers are afraid of reprisals,” laments the head of CAEA.

The situation, however, seems to be stabilizing in Mercasevilla, the main food market in Andalusia and the fourth in Spain. This Tuesday, 1,888 tons of merchandise entered, an amount higher than the 1,633 on Monday, and which contrasts with the 78 tons of a week ago. “With the entry of products, retailers who have come to make their purchases at Mercasevilla, including fish, have been served,” says a spokesman for the Seville City Council.

In Mercagranada, one of the most affected points last week, the arrival of the products, according to Julián García, its commercial director, has been normal and without incidents or protesters that hindered access. Supply and commercial activity have been “relatively normal” with enough vegetables and fruit to meet demand, but not fish, which has barely arrived due to the fishermen’s strike. This lack has affected some fishmongers in the city, which have been forced not to open their doors due to lack of goods.

Jordi Espín, general secretary of Transprime, the Spanish Association of cargo companies, whose members include some of the companies that are operating with difficulties, such as Mahou San Miguel, Capsa -owner of Central Lechera Asturiana- or Danone, sees a huge concern in his daily meetings with them. “Not even in the toughest moments of the pandemic did the chain fail. The right to supply supermarkets, pharmacies or hospitals is being attacked. Associates tell us that they are reducing production. They are charging only 10 or 20% of what they would have to charge and tougher solutions are being considered, such as ERE”.

There are other, somewhat less gloomy hints. In the Catalan capital, Mercabarna has received 7% less fish and 20% less fruit. And the activity in Mercamadrid, supported by a security device, developed on Tuesday morning close to normal, at 90% of a Tuesday in March. The data is better than that of a week ago, when only 50% of the usual merchandise entered.

Milk, the most sought after in Madrid and Barcelona

In Madrid, milk is the product that consumers find most difficult to find. If last week the supply cuts mainly affected fresh milk, in recent days it has spread to the rest. In the Carrefour in the Ventas neighborhood there is only almond, coconut, soy and oat milk. From cow there are some bottles of fresh milk left in the fridge. “Stocks run out very quickly in the warehouses and the trucks arrive in dribs and drabs,” says a stocker.

There is a shortage of packages of kitchen and toilet paper. Those of rice, beans, chickpeas and lentils are not abundant either. The flour for pizza and frying ran out last weekend and they have not been replenished. “Between tomorrow or the day after, perhaps some units will arrive, but I cannot guarantee it. We display the few products we receive, but people take them away quickly”, adds another clerk. There are not enough bottles of oil, especially sunflower oil, in the epicenter of the Ukrainian crisis. Finding them has become a kind of treasure hunt, and when it is, its price surprises. “The brand I used to buy cost less than one euro and now it is worth more than twice as much,” says a customer. However, others claim not to be affected. “I have found everything, fortunately,” celebrates Victoria, who leaves with a full bag.

At the Día store in the same area, the milk shelf has also been empty for a few days. “Some customers take everything they can due to fear of shortages, but the problem is that we do not receive the merchandise. I ask for boxes every day, but they don’t arrive,” says Sara, a shop assistant. At this point of sale, yogurts are becoming scarce, although at the moment only a few brands are missing.

The story of the crisis has nuances by changing the most populous city in the country for the second. Madrid for Barcelona. But it is essentially similar. “There has been some occasional delay, but we are not noticing it much,” says Ana María Bagallo, the coordinator of a Barcelona supermarket of the Keisy chain. “They have told us to ask for more milk in case it is lacking. stock“, Explain. Some of the dairy brands are empty on the store’s shelves, as is also the case in two other nearby supermarkets, Bonpreu and Consum, where some brands of flour, pasta, toilet paper and sugar are also missing. None of the products are completely out of stock.

In the supermarkets of the Catalan capital, the effects of the carriers’ strike depend on where you look. In Consum, the legumes section is especially empty. “They are not reaching us,” comments the manager who, due to company policy, prefers to remain anonymous. In the aisles of the stores visited, between the districts of Gràcia and L’Eixample, there is a lack of oil, especially sunflower oil due to the war in Ukraine and also some olive brands.

In the vegetable section of Consum there are only two red peppers and less variety of tomatoes than usual, products that come from the Andalusian orchard, one of the communities where the strike is being most noticeable. The person in charge of Keisy explains that in the last week there has been a shortage of these fresh ones —also of strawberries— at some point.

The first round of elections in France outline a political landscape of extremes | International
April 12, 2022

The dilemma of the youth of Lebanon: escape from a failed country or fight in the elections | International
May 14, 2022

The dilemma of the youth of Lebanon: escape from a failed country or fight in the elections | International

The grain corridor in the Black Sea opens a door of hope in the face of the food crisis | International
August 10, 2022

Four trains and 11 hours: Lisbon and Madrid less well connected than in 1881 | International

Cristina Kirchner: The attack against Fernández leads to a review of the security of Lula and Bolsonaro in Brazil | International
4 weeks ago

Cristina Kirchner: The attack against Fernández leads to a review of the security of Lula and Bolsonaro in Brazil | International

Biden reaffirms in Israel the “unwavering commitment” to its security | International
July 13, 2022

Biden reaffirms in Israel the “unwavering commitment” to its security | International