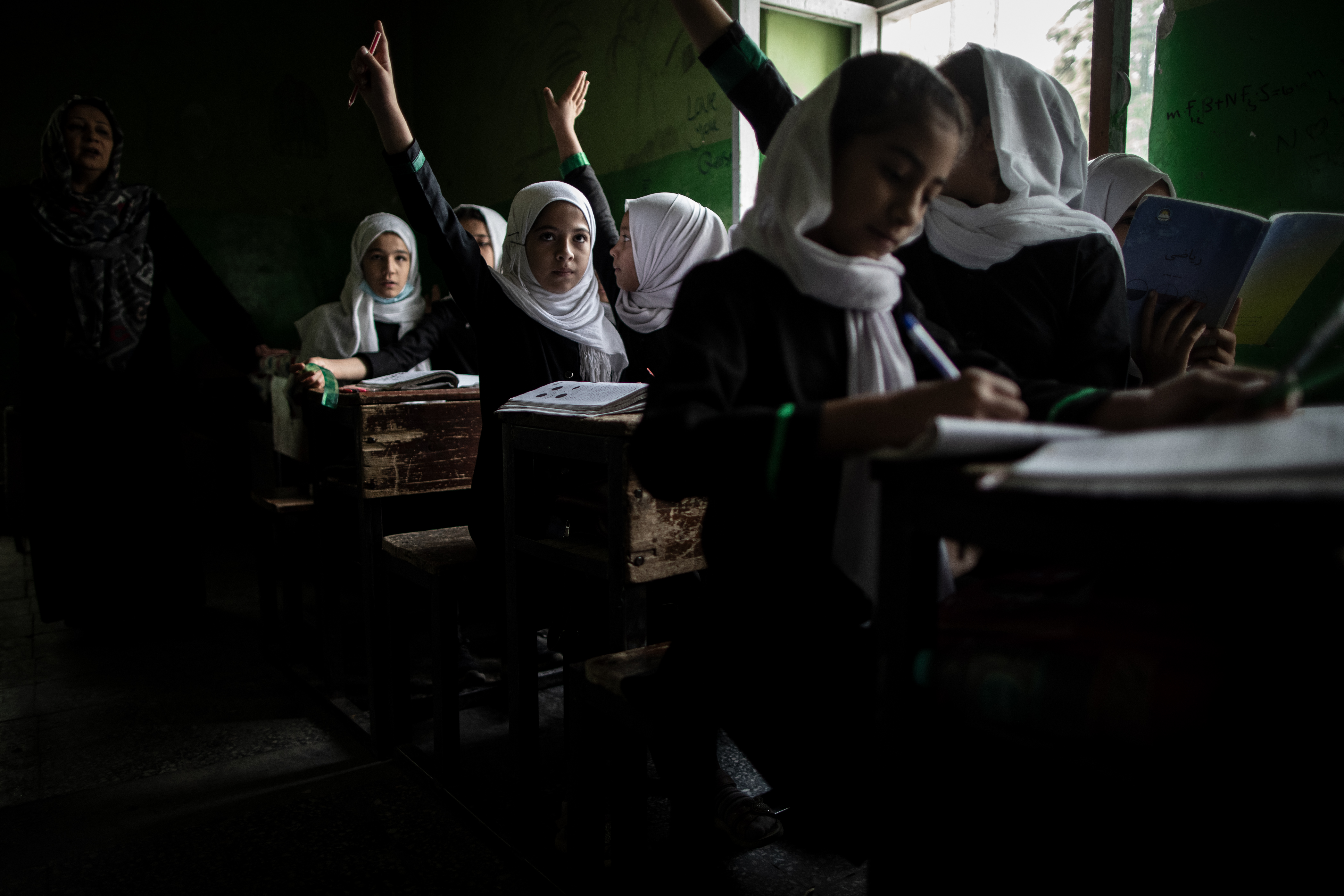 The dream of many Afghan adolescents of resuming their education has been frustrated again this Wednesday, just a few hours after students over 12 years old were able to return to classes at their institutes, which had been closed since last August with the taking of power by the Taliban. After announcing the reopening of secondary schools and universities for female students, the Afghan fundamentalist regime suddenly decided to close them. Disappointed, many young women left classes in tears.

“What have we done wrong? Why do we women and girls have to face this situation?” asked the young Afghan Wajiha Amimi, who confessed to Agence France Presse (AFP) that she had spent “all night making and remaking her school backpack”, moved by the idea of ​​returning to his institute. A teacher at another Kabul girls’ school, the Omara Khan College, confirmed that her students burst into tears when told to go home after they had made up their minds that they could resume their education. In another institute in the Afghan capital, the Zarghona school, the girls, despondent, closed their books and picked up their backpacks, also in tears, according to the story of the same press agency.

Some students at a Kabul high school briefly protested in the street after being forced to leave their school, according to witnesses and feminist activists cited by AFP. “They left when the Taliban came and told them to go home. It was a peaceful demonstration” assured a merchant.

The Afghan government did not give any clear explanation for its sudden change in position. Prior to the announcement that the students had to return home, the authorities had organized a ceremony in the capital to celebrate the start of the new school year for these teenagers. The Education Ministry announced last week that secondary schools for all students, including girls, would open on Wednesday across the country after months of restrictions on the education of minors of school age. On Tuesday night, a spokesperson for the Ministry of Education even posted a video congratulating all the students on their return to classes.

However, this Wednesday, the schools received a note from the Ministry of Education ordering the closure of schools for girls until a plan is drawn up in accordance with Islamic law and Afghan culture, according to Bakhtar News, an agency Afghan government news. “We informed all girls’ high schools and those with female students above sixth form [12 años] that they will not have classes until further notice”, read the note. In September, just over a month after the overthrow of the previous Afghan government and the Taliban’s seizure of power, children of all ages and younger girls started the school year relatively normally.

The only additional explanation for this sudden announcement was offered by Taliban spokesman Aziz Ahmad Rayan, who used the same argument used up to now to justify the closure of women’s secondary schools and universities, namely the need to ensure that the schooling of girls respect the norms of the Islamic religion according to the rigorous interpretation of the Taliban, especially the separation of the sexes. Activists for the rights of Afghan women and girls have argued these months that this is a mere pretext, since Afghan students were already segregated by sex in most educational centers even before the taking of the power by the Taliban.

“In Afghanistan, especially in the villages, the mentality is not prepared,” said Aziz Ahmad Rayan, who then alluded to “cultural restrictions” and specified that the main spokesmen for the Islamic Emirate — as the Taliban regime calls itself — will offer “better explanations”. A Taliban source interviewed by France Presse in Kandahar, in the south of the country, the birthplace of the fundamentalist movement, stressed that the country’s authorities had a “responsibility to provide appropriate education and educational facilities” to students.

The Afghan Education Ministry has also acknowledged that its administration faces a teacher shortage, after many teachers fled the country when fundamentalist guerrillas ousted Western-backed President Ashraf Ghani. “We need thousands of teachers and to solve this problem we are trying to hire new teachers on a temporary basis,” the Taliban spokesman told Al Jazeera.

The UN Special Representative for Afghanistan, Deborah Lyons, has condemned the decision to close secondary schools for girls and has asserted that this measure “undermines confidence in the commitment of the Taliban”. This resolution of the fundamentalists “further undermines the hopes of families for a better future for their daughters,” she stressed in a tweet.

When the Taliban took power, the international community feared that girls would be totally excluded from education, as was the case during their previous period in power, between 1996 and 2001. Since August, although they have allowed the schooling of minors In primary education, the Taliban have postponed the reopening of junior high schools and women’s colleges. The international community has made the right to education for all Afghan children, regardless of gender, one of the key demands in negotiations on aid and recognition of the Islamist regime.

Last minute of the war today, live | Zelensky: “Before we talked about peace, now we talk about victory”

Flee or stay?: Being a journalist in Bukele’s country | International

Chile begins the search for 1,162 disappeared from the Pinochet dictatorship

By admin
Recent Posts
Latest News
Facebook Twitter WhatsApp Telegram
Back to top button
Close
Featured Posts
Guterres warns of “a winter of discontent” due to the war in Ukraine, inflation and inequalities | International
2 weeks ago

Guterres warns of “a winter of discontent” due to the war in Ukraine, inflation and inequalities | International

The shooting at Robb’s school in Texas in pictures

Gregório Duvivier, comedian: “Bolsonaro scares with the coup to negotiate an honorable exit” | International
2 weeks ago

Germany: Schröder sues the Bundestag for cutting his privileges as former chancellor in response to his closeness to the Kremlin | International
August 12, 2022

Germany: Schröder sues the Bundestag for cutting his privileges as former chancellor in response to his closeness to the Kremlin | International

A huge fire in some fuel depots in Cuba leaves 17 missing and more than 120 injured | International
August 7, 2022

In search of a place for the European Union in the world | Opinion
July 2, 2022