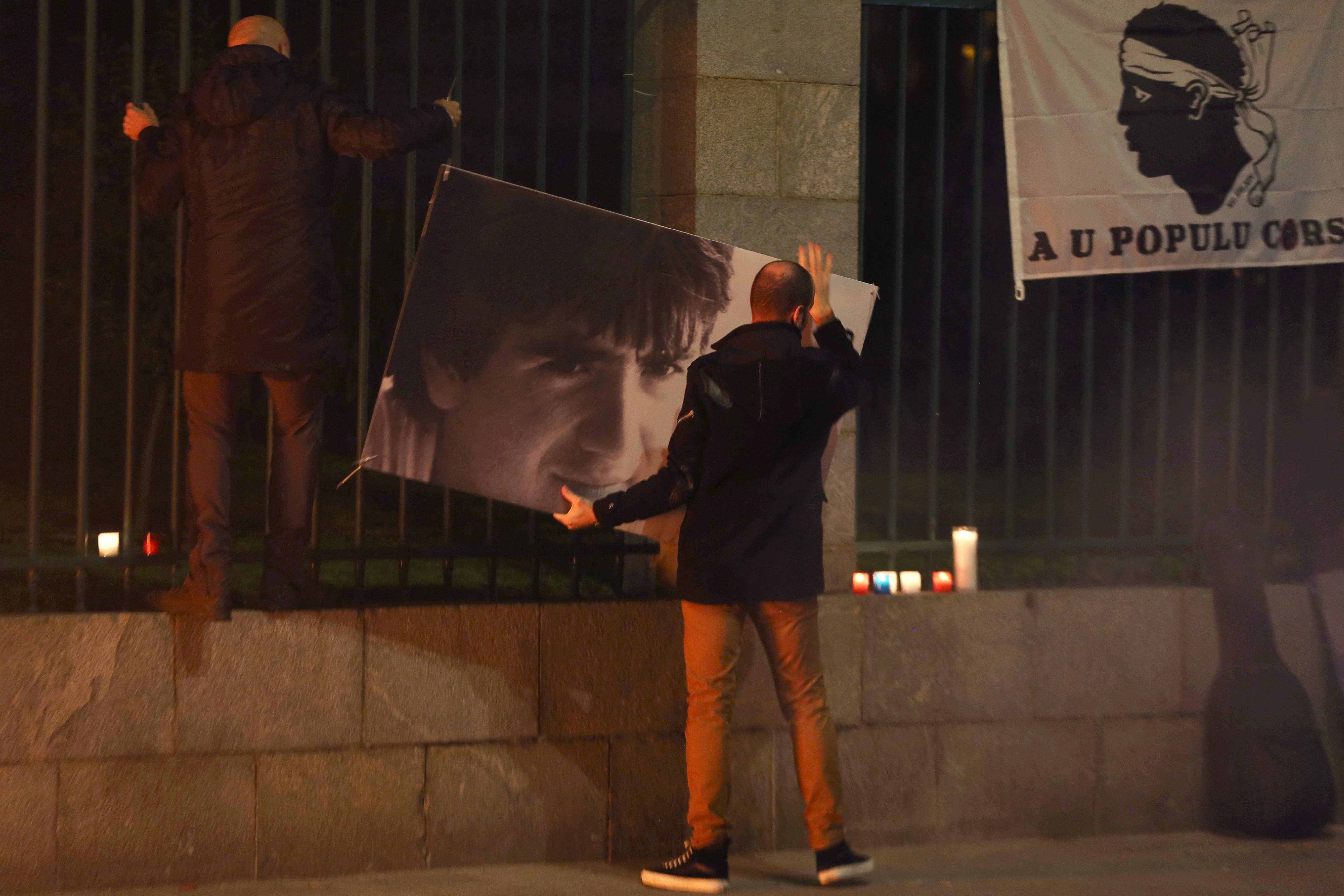 French President Emmanuel Macron called on Tuesday to remain calm in Corsica, an island that has spent a night in tense mourning over the death of Yvan Colonna. The 61-year-old Corsican nationalist, a controversial figure in the island’s independence movement, was serving a life sentence for the murder of a prefect in 1998 when, three weeks ago, he suffered a brutal assault in prison that left him in a coma and, finally, the night Monday caused his death. The attack on Colonna provoked, a few weeks before the presidential elections, a wave of riots and indignation in Corsica that led the French Executive to unexpectedly propose a dialogue with a view to an eventual autonomy of the island, as well as to authorize the rapprochement of other nationalist prisoners serving sentences in various parts of the country.

“The most important thing is to remain calm,” Macron said on the regional station France Bleu, in which he also called for “responsibility” from the local authorities, while reiterating the official promise that the causes of the attack will be promptly investigated. attack Colonna.

On March 2, a prisoner convicted of jihadism, the Cameroonian Franck Elong Abé, attacked the Corsican nationalist in the bodybuilding room of the Arles prison, in the south of France, a prison where both were serving sentences. According to video surveillance images, Abé threw himself on Colonna, allegedly outraged by a blasphemy from the Corsican and, for eight minutes, strangled him with his hands and tried to suffocate him with a plastic bag over his head without the intervention of security agents. Something that has been widely considered a breach of protocol, especially considering that both Colonna and Abé were “particularly notable detainees”, for which they were subject to increased surveillance.

“We all know the reasons that led Yvan Colonna to prison, the cold-blooded murder of the prefect [Claude] Érignac, but the dramatic circumstances in which he was murdered are, obviously, very shocking”, acknowledged the government spokesman, Gabriel Attal, on the Europe 1 radio station on Tuesday. For this reason, he added, “we are going to investigate what happened, which It’s the responsibilities.” Attal recalled that a judicial information has been opened, an inspection is being carried out and even parliamentary hearings will be held in this regard.

Colonna (Ajaccio, 1960) was the most famous pro-independence prisoner in Corsica. The son of a teacher and deputy who abandoned his studies to devote himself to the island’s independence cause, Colonna always denied being responsible for the death of Érignac, the prefect of Corsica, shot three times on the night of February 6, 1998, when he was going to a classical music concert. After being on the run for four years, in which he was believed to be in Venezuela, Sardinia, Vanuatu or Costa Rica, but in reality he spent hiding as a shepherd near Propriano, in southern Corsica, Colonna was arrested and subjected to a long process. until, in 2011, his life sentence was definitively ratified.

Calls from his family and the Corsican nationalist movement to bring him closer to the island went unheeded until his attack earlier this month, which sparked strong protests in Corsica. The harshest clashes occurred last Sunday in Bastia, where a violent demonstration left 107 injured, 77 of them, law enforcement officers.

In a three-day visit last week, the Minister of the Interior, Gérald Darmanin, promised to open discussions with the island’s authorities – the president of the local Executive, the autonomist Gilles Simeoni, was one of Colonna’s lawyers – about the possibility of Corsican autonomy. The dialogue will begin in April, as confirmed by the government spokesman on Tuesday. However, Attal recalled that Paris will set several “red lines”: “It is obviously about keeping Corsica in the Republic and the fact that we will never accept that there are two categories of citizens in the Republic”, he said.

The news of Colonna’s death raised fears of a new wave of unrest. But the first night has passed calmly, in accordance with the appeal of the family who had asked that the “time of mourning” be respected. A dozen people gathered overnight in Bastia in front of the courthouse gate where they hung flags with the slogan “Statu francese assasinu” (French state, murderer, in Corsican), while in Ajaccio, several people gathered in silence before the cathedral, reports The Parisien.

This Tuesday, numerous high schools on the island, as well as the university, woke up blocked with containers and flags, while many students paid tribute, also for the moment without violence, to Colonna, according to the Franceinfo radio station.

Chile votes divided the destiny of the new Constitution

Check Also
Close
Salary of the ONCE: check the result of today’s draw, Sunday, October 2
16 mins ago

Pedro Sánchez arrives in kyiv to meet with Zelensky | International

Bolsonaro and Lula face each other in the first electoral debate, in pictures
August 29, 2022

Bolsonaro and Lula face each other in the first electoral debate, in pictures

Michelle Bachelet will make a controversial trip to China that includes a visit to Xinjiang | International
May 20, 2022

Brothers of Italy is firmly advancing to become the great party of the right | International
May 1, 2022

The tragic flight to nowhere of a prisoner with his jailer in the US | International
May 10, 2022

The fires are reactivated in Portugal, with almost all municipalities at extreme risk | International
July 13, 2022

The fires are reactivated in Portugal, with almost all municipalities at extreme risk | International