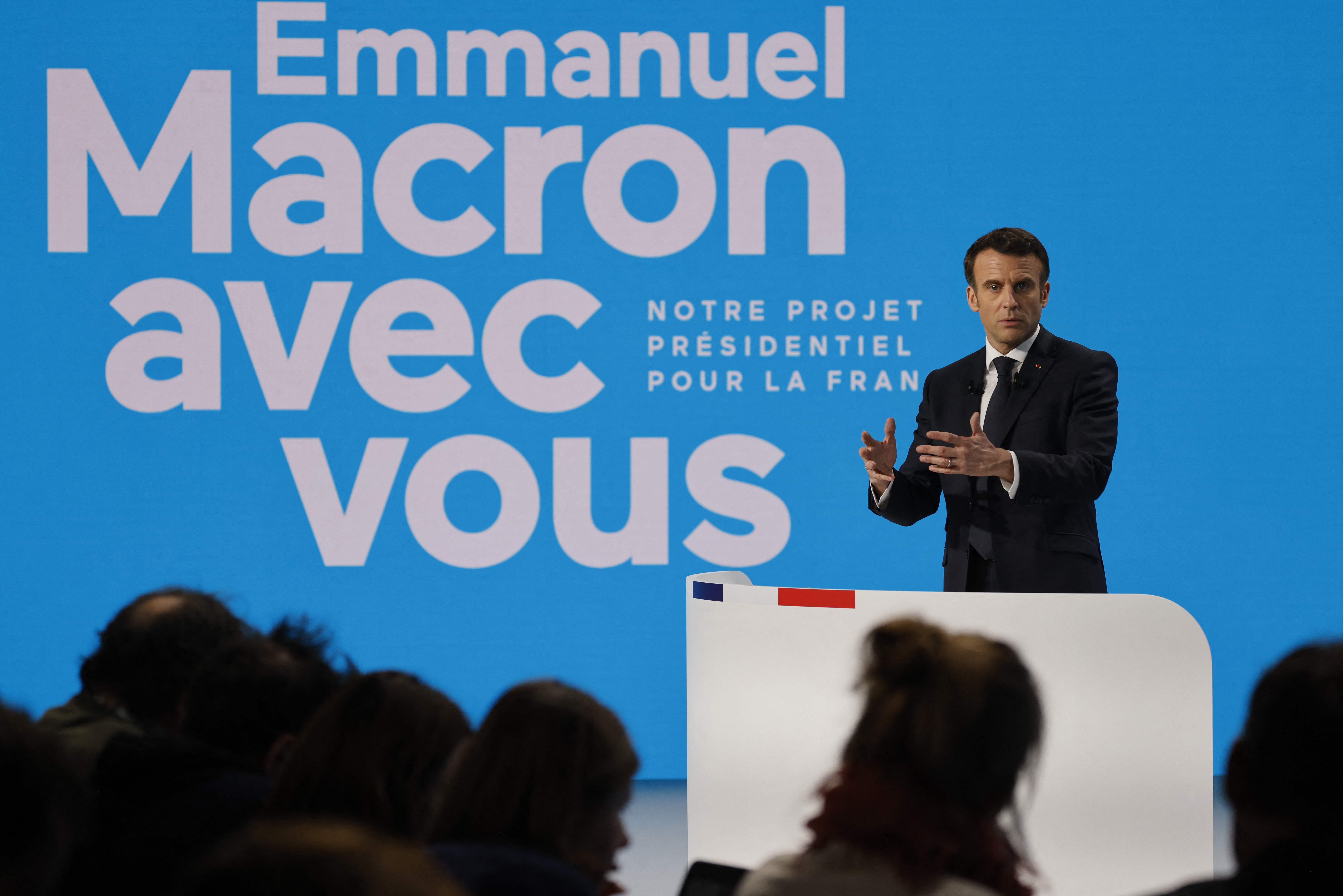 Is he a candidate or president? It was not clear, when this Thursday afternoon Emmanuel Macron appeared in a former industrial warehouse in Aubervilliers, north of Paris, if it was one thing, the other, or both at the same time. In theory, he came as a candidate to present to the press and the country the electoral program for the presidential elections in two rounds, on April 10 and 24. In reality, it is impossible to separate both roles, that of candidate for re-election and that of head of state.

Everything changed in these elections on February 24, when Russia invaded Ukraine. After decades of peace, war returned to Europe. Macron, at the head of a country armed with the atomic bomb, soared in the polls and consolidated his status as his favorite to repeat in office.

“The project that I present to you is obviously anchored in our moment, that is, that of the return of the tragic in history,” Macron said at the beginning of an hour and a half intervention, followed by two and a half hours of questions from the journalists.

Macron’s program is continuous, if it is possible to speak of continuity after a five-year period full of shocks such as the revolt of the yellow vests, the pandemic and the Russian invasion of Ukraine. Among the star measures is the raising of the retirement age from the current 62 years to 65 and the obligation, for recipients of the minimum income, of 15 to 20 hours of weekly activity, training or working.

To the question about whether these proposals confirm that, despite his centrist vocation, he actually tends to the right, he answered by referring to Charles de Gaulle, father of modern France. “On this subject,” he declared, “I assume to be quite a Gaullist. The general said: ‘France is on the left when she is in favor of the movement, the change. And she needs right-wing decisions: order, work, merit’. In my program there are reforms and ambitions with an inspiration that could be said to be from the left, and others from the right”.

The presentation and the press conference this Thursday are a very French exercise. A detailed program is required of any minimally credible candidate. And with an estimate of the price. Macron’s will cost 50,000 million euros per year until 2027, which should be financed thanks to economic growth and reforms. It will also lower taxes worth 15,000 million euros.

Ukraine has canceled the election campaign. There is no talk (almost) of anything else: the war and the impact on pockets. There are no debates among the 12 candidates — Macron refuses to participate — and rallies are rare. The proposals of most candidates have become inaudible between Russian bombs in kyiv or Mariupol and the millions of refugees fleeing Ukraine.

In this unusual context, only Macron’s voice is heard. His international initiatives. The failed dialogue —but which he is not willing to give up— with the Russian president, Vladimir Putin. The massive sanctions of the European Union, the shipment of weapons to Ukraine and the return of a certain idea of ​​a Europe as a military power.

“We are not in a logic of the end of the kingdom,” says Frédéric Dabi, general director of Opinion at the Ifop demoscopic institute. “We are in a logic of continuity.” Macron, if the elections were held today, would get 30% of the vote in the first round, according to the latest daily poll published by Ifop. In second position would be Marine Le Pen, leader of the far-right National Regroupment party, with 17.5% of the vote. Both would qualify for the second round, according to Ifop and the rest of the polls. The Macron-Le Pen duel would be a repeat of the 2017 one. Polls indicate that, like then, Macron would win.

While Macron has benefited from the war in Ukraine and from the effect of national unity typical of times of crisis, there is an immediate victim: Éric Zemmour, the far-right television talk show host who broke into the campaign like a whirlwind in the fall and, at times, he thought he would reach the second round of the elections.

Zemmour had been faltering for weeks, but the war in the Ukraine has left him shaken. There was no candidate in France more enthusiastic about Putin than him. None have fallen so much in the polls since the invasion.

Now Zemmour is around 13% of the vote, behind Le Pen. At the same level, with variations depending on the poll, are the candidate of the traditional right, Valerie Pécresse, and the first on the left, the veteran populist Jean-Luc Mélenchon. The environmentalist Yannick Jadot would obtain, according to Ifop, 5%. The mayor of Paris, the socialist Anne Hidalgo, 2%, a result that, if it were that of April 10, could mean the death of her party.

When he had been speaking for more than an hour and saw a murmur of impatience among the journalists, Macron stopped reading and smiled: “This is a presidential debate!” “By doing this,” he added, referring to the speech and the press conference, “I am committing myself so that the mandate is clear.”

Protection is the key word in the Macronist discourse, as well as what he calls emancipation: social liberalism, French style. At times, more than an electoral program it already sounded like a government program.

Trump will have to pay $110,000 to have a contempt order withdrawn | International

Today’s ephemeris: What happened on October 3?
56 mins ago

By admin
Recent Posts
Latest News
Facebook Twitter WhatsApp Telegram
Back to top button
Close
Featured Posts
Gabriel Boric: “I found it unacceptable that the investiture ceremony was delayed because the King of Spain was late” | International
March 15, 2022

Gabriel Boric: “I found it unacceptable that the investiture ceremony was delayed because the King of Spain was late” | International

How the map of Ukraine has changed in three months of war | International
May 22, 2022

Diego Molano: The Colombian Minister of Defense defends the Putumayo operation although he acknowledges an “inaccuracy” about those captured | International
April 27, 2022

Alert in Jerusalem before the march of thousands of Israeli radicals through the Arab neighborhood | International
May 29, 2022

Draghi, another crack in the European wall | International
July 17, 2022

Draghi, another crack in the European wall | International

Sweden believes that joining NATO would reduce the risk of conflict in Northern Europe | International
May 13, 2022

Buffalo Slaughter: The Buffalo Shooter’s Descent into the Hell of Supremacism | International
May 21, 2022

Buffalo Slaughter: The Buffalo Shooter’s Descent into the Hell of Supremacism | International

Chile begins the search for 1,162 disappeared from the Pinochet dictatorship
June 13, 2022

Chile begins the search for 1,162 disappeared from the Pinochet dictatorship