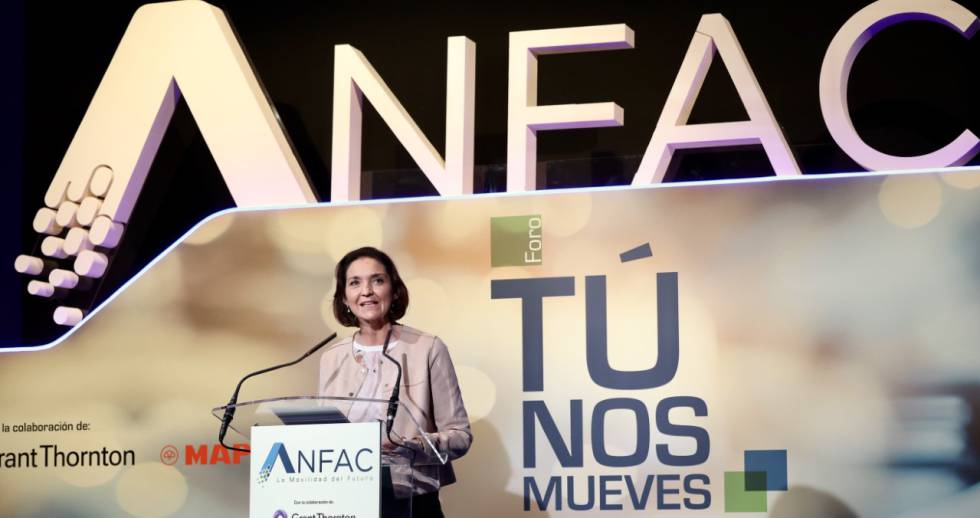 The Government already has the bases of the PERTE (strategic project for the recovery and economic transformation) of the electric car ready. Much of the future of the automotive sector in Spain depends on this aid scheme, which will have close to 3,000 million European funds and plans to mobilize a total investment of 19,000 million: Volkswagen has conditioned the transformation of its plants into Barcelona and Navarra to assemble new plug-in models and the installation of an electric battery factory that, according to all forecasts, would be installed in Sagunto (Valencia). But those millionaire investments were waiting for the Government to publish the small print of the support program for the sector. The Minister of Industry, Reyes Maroto, announced this Wednesday that the PERTE will be published in the Official State Gazette (BOE) next Friday.

This was stated by Maroto during his participation in the Tú Nos Mueves Forum, organized by Anfac (the Spanish Association of car and truck manufacturers). “Friday will finally be the publication in the BOE, which we hope will change history”, assured Maroto, who has shown confidence that the project will allow Spain “to lead electromobility in Europe”. “We encourage you so that those projects on which we have been working with you can be carried out”, the minister questioned the companies attending the forum.

In the auditorium of the Casa de América, in Madrid, the president of the Spanish manufacturers’ association, Wayne Griffiths, CEO of Seat (the Spanish brand of the German Volkswagen group), who was elected in January to replace José Vicente de the Mozos (Renault). Griffiths, who has previously intervened with the minister and had already reminded her that the PERTE date was yet to be known, has asked that this program allow “to ensure that the aid reaches the companies quickly”. “We have a lot at stake because we have strong competitors in Europe, especially in Eastern Europe,” said the president of the employers’ association.

The forum has also served to review the situation of a sector that since 2020 has suffered the ravages of the pandemic, the semiconductor supply crisis and, more recently, the war in Ukraine and the shortage of energy and fuel. This Wednesday, without going any further, the Valencian Ford plant in Almussafes has stopped production due to the worsening of the supply crisis and other difficulties derived from the transporters’ strike. Griffiths has described the circumstances that have surrounded the sector in recent months as the “perfect storm”.

Fight for the pieces

Spanish car and component manufacturers are trapped by the supply crisis aggravated by the Russian invasion of Ukraine. They assure that they have launched plans to be more agile, flexible and that they fight every day for the pieces. The president of Volkswagen Navarra and general director of the Landaben factory, Markus Haupt, explained that the situation is similar to that of recent months, so “we are fighting to get parts”. The trend has been quite positive since the beginning of the year, which has meant that it has only had to stop for three days and that it is manufacturing in three shifts, five days a week, he explained. Haupt has said that he does not have a “crystal ball” to predict how this “very volatile” scenario will evolve, so they will continue to fight for all the pieces to guarantee production at the maximum level.

For his part, the head of the Mercedes-Benz plant in Vitoria, Emilio Titos, has stated that they are suffering and managing (through digitization) the shortage of parts (about 13,000 are required for the manufacture of their models), which which is almost “a miracle”. Each one of the pieces is followed up and channeled to where there is the highest priority, which is the client, he has highlighted.

The CEO of Grupo Antolín, Jesús Pascual, has indicated that they are managing the situation as best they can because they depend on what their clients do. The person in charge of the group of automotive components specifies that they have to adjust to whether their clients (manufacturers) can produce or not. Now that it seemed that “the light at the end of the tunnel” with semiconductors was seen, the invasion by Russia -where they have factories- has arrived in Ukraine. This war has once again stopped production in Europe for Volkswagen and BMW, lamented the manager.

With the great challenge of electrifying and digitizing the Spanish vehicle fleet in the coming decades, the general director of Anfac, José López-Tafall, has shown little complacency: “We are going in the right direction, but not at the pace we need; We have to run more.” Griffiths has influenced the same, who has recalled that Spain is far from the European average in the penetration of electric vehicles and in the installation of public charging points. For this reason, the president of the employers’ association has requested a change that, with the impulse of PERTE, allows Spain to “go out to win, and not to defend or tie”. The employer of Spanish manufacturers has recalled that the sector is responsible for 10% of the country’s GDP and 9% of employment, with almost two million jobs, between direct and indirect.

Electricity should be a common good, a right | Economy

The pistachio boom floods the fields of La Mancha | Economy

Scholz and Sánchez, two social democrats united in the face of their toughest winter | International

Citizens mourn Isabel II: “Thinking that she will no longer be there leaves you breathless” | International
3 weeks ago

Citizens mourn Isabel II: “Thinking that she will no longer be there leaves you breathless” | International

Abbas’s statements on the Holocaust in the presence of Scholz unleash a barrage of criticism | International
August 17, 2022

Farmgate: A scandal with spies, a luxury farm and a millionaire robbery surround the president of South Africa | International
July 11, 2022

Farmgate: A scandal with spies, a luxury farm and a millionaire robbery surround the president of South Africa | International

The rise and fall of Javier Milei, the star of the liberal far-right in Argentina
June 18, 2022

The rise and fall of Javier Milei, the star of the liberal far-right in Argentina

Krisjanis Karins: Prime Minister of Latvia: “The entire eastern flank of NATO is in a vulnerable position” | International
June 15, 2022

Krisjanis Karins: Prime Minister of Latvia: “The entire eastern flank of NATO is in a vulnerable position” | International

The Finnish Parliament backs the application for NATO membership with a very large majority | International
May 17, 2022

At least 34 dead in a warehouse fire in Bangladesh | International
June 5, 2022

At least 34 dead in a warehouse fire in Bangladesh | International

Borrell defends the constituent process: “If it includes different political expressions, Chile has nothing to fear” | International
May 1, 2022

Borrell defends the constituent process: “If it includes different political expressions, Chile has nothing to fear” | International

Victims of the shooting in Uvalde, Texas

The UN expels Russia from its Human Rights Council for the invasion of Ukraine | International
April 7, 2022