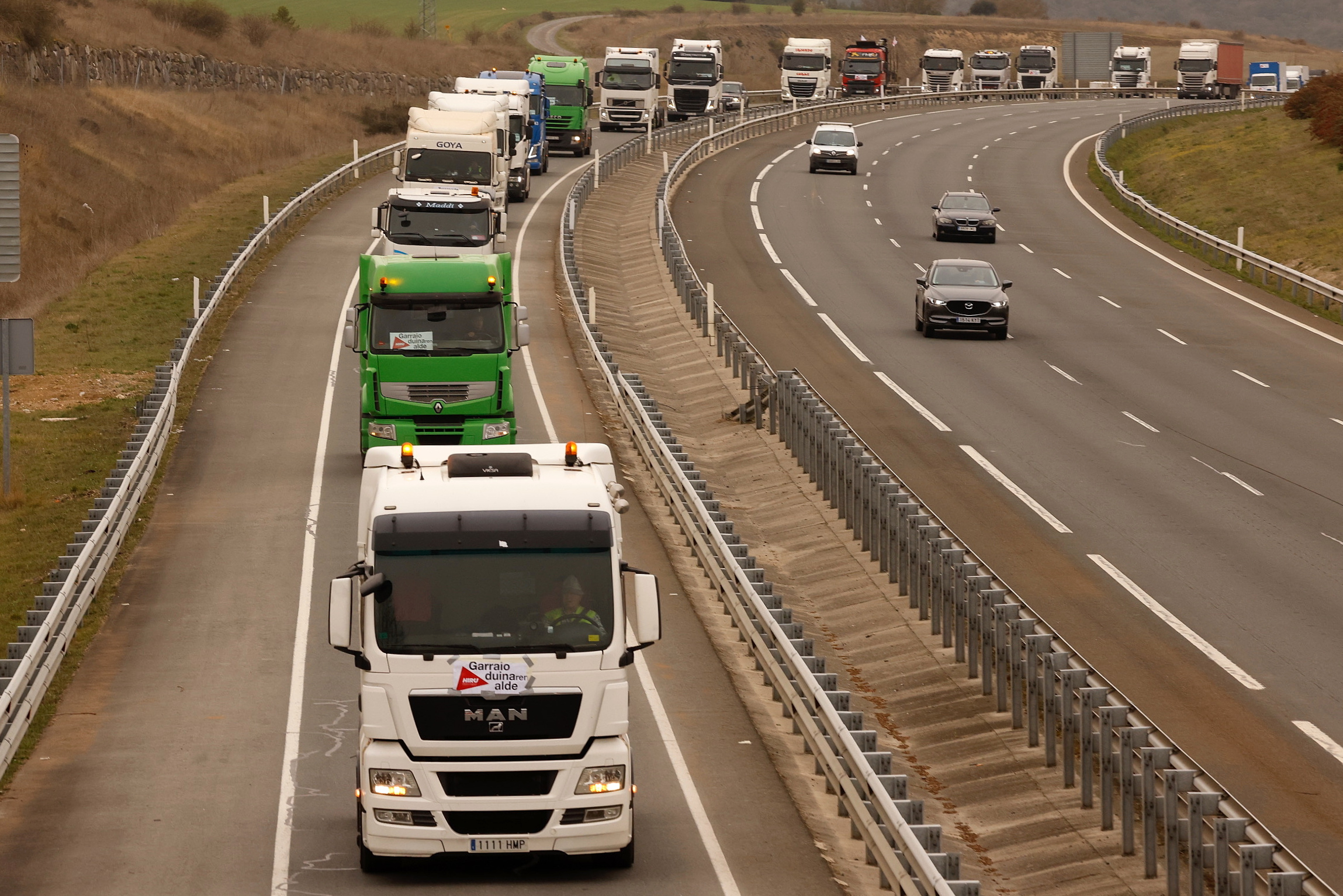 The indefinite stoppage of freight transport that small businesses and self-employed truckers have been carrying out since last Monday throughout the country due to the rise in fuel prices, called by the Platform for the Defense of the Freight Transport Sector, has festered after three days of protests. Violent incidents, with roadblocks or pickets preventing access to ports, large markets, industrial estates and loading areas, have multiplied. Meanwhile, problems with the supply of merchandise are growing and there is already talk of shortages in the large wholesale markets such as MercaMadrid, MercaCórdoba or MercaGranada, while industries such as dairy, steel or fruit and vegetable have warned that they will have to stop production if conflict remains.

Before this situation, the Government has had to react and the Minister of Transport, Mobility and Urban Agenda, Raquel Sánchez, has denounced the “force, violence and coercion” with which some pickets are acting, and has assured that they will act with the “greater force” to guarantee that truckers who want to work can do so, reinforcing the transit of trucks through convoys.

“It cannot be consented or tolerated that in a democratic and rule of law violence and force are used to prevent those who want to work from working,” he has indicated in statements to the media, in a break from the meeting he is holding this Wednesday. in the Ministry with the National Committee for Road Transport (CNTC), the body that brings together most of the carrier associations, but in which the Platform calling for the strike is not represented.

And it is that the Government still does not recognize the Transport Platform as a valid interlocutor in the conflict, despite the fact that its leaders have reiterated that the CNTC does not represent the transport sector, because it only includes the associations of the large transporters, “with companies that do not even have a truck and subcontract all the transport to us to take the commissions,” according to the Platform’s president, Manuel Hernández. The CNTC, which includes business organizations such as the National Federation of Transport Associations of Spain (Fenadismer) and the Spanish Confederation of Freight Transport (CETM), says that the strike is a minority because the organizers do not represent even 5% of the sector.

The Spanish Confederation of Business Organizations (CEOE) and the Spanish Confederation of Small and Medium Enterprises (Cepyme) have aligned themselves with the Government, and have condemned the “violent acts” that are taking place in the framework of the carrier strike, and They have called for the authorities to stop these acts, because this situation “does nothing but worsen the difficulties that Spanish companies in general are going through.”

The main claim of the Transport Platform is the “prohibition, without the possibility of an agreement against, the contracting of transport services below the operating costs, being the reference of the amount of the cost, and officially, the Cost Observatory published by the Ministry of Transport (with monthly update)”. In addition, it requests that sanctions be included from the National Commission of Markets and Competition in case of non-compliance, limit the intermediation in the Transport contract to a single contractor (establishing direct responsibility to the main shipper in case of non-payment of services to the carrier ) and a maximum payment term of 30 days, also linked to a penalty system for non-compliance.

The strike, which hardly affected merchandise supplies on Monday, is already making its effects felt on the third day of monitoring with supply problems in the large wholesale markets for fresh products. The first food logistics platform in Spain, Mercamadrid, has only received half of the usual merchandise downloaded this Wednesday. The Association of Wholesale Entrepreneurs of the Central Fruit Market of Madrid (Asomafrut) has warned of a possible shortage of supplies if the strike of carriers continues, mainly from the southern southeast and areas of origin with greater production such as Almería, Granada, Huelva, Málaga or Murcia.

The president of MercaCórdoba, Antonio Álvarez, has denounced that the influx of retailers to the market is at 60%, although most of the fish stalls in the municipal markets remain closed due to the lack of product, as they do not leave at origin for fear to picketing incidents. Similar problems have been reproduced in MercaBarna or MercaGranada, where police presence has been necessary to guarantee the entry of goods.

Industries also suffer from shortages of raw materials. The business association of steel companies (Unesid) has warned that the stoppage of road transport is having “a greater impact than expected”, especially in the main industrial hubs, where customers and suppliers are the most affected.

The Spanish Federation of Food and Drink Industries (FIAB) has denounced “serious problems” in the operation of the food chain due to the blockade that is taking place on some Spanish roads due to the transport strike. The employers have reported numerous incidents due to the cuts that are preventing the entry and exit of vehicles from companies, logistics centers and operations that supply raw materials, making it difficult to collect essential goods for the operation of the sector.

Although without a doubt the most affected sector has been the dairy sector. The National Federation of Dairy Industries (Fenil) has announced that the associated companies are forced to suspend their processing activity as a result of the transport strike. Specifically, the factories have seen the supply of the necessary inputs for the production of dairy products interrupted and also the transfer of the finished product to the distribution chains, for which the packaging and storage capacity has been annulled.

According to Fenil, which integrates more than 60 companies in the sector and represents more than 95% of the national production of dairy products, this stoppage is causing “inevitable” social, economic and environmental consequences, since it will mean the suspension of the collection of the milk on farms from tomorrow”.

The issue has also become a political weapon. The president of the Xunta and next leader of the PP, Alberto Núñez Feijóo, has demanded that the central government call a transport sector conference to seek an agreement with the carriers “immediately” in the face of the “situation of collapse” due to the strike . Speaking to journalists, after participating in an institutional act in Santiago de Compostela, he denounced the moments of “extraordinary difficulty” experienced by this strike, with problems on farms for feeding livestock and “tons of fish” retained in the fish markets

Faced with this position, the Minister of Agriculture, Fisheries and Food, Luis Planas, has assured that he is following the transporters’ strike “closely and with concern” so that it does not cause food shortages, and has only recognized that some have been detected ” punctual disruptions” in some fresh products such as fish, fruits and vegetables.

A judge stops the fine of 9,000 million pesos to Iberdrola in Mexico

In the sun and next to a lake, the French left warms up to defeat Macron | International
4 weeks ago

In the sun and next to a lake, the French left warms up to defeat Macron | International

Last minute on Elizabeth II, live | The British Parliament interrupted the session to send a message of support to the Queen | International
3 weeks ago

Last minute on Elizabeth II, live | The British Parliament interrupted the session to send a message of support to the Queen | International

Hundreds of Puerto Ricans protest against the operator of the electrical network on the island
August 27, 2022

Results of the elections in Colombia by municipality | Presidential Elections Colombia
May 30, 2022

Results of the elections in Colombia by municipality | Presidential Elections Colombia

Invasion of Ukraine: 1,425 days. From Sarajevo to Kyiv | International

War in Ukraine: The world is sinking into a spiral of conflict. This is the balance of forces | International
June 26, 2022

War in Ukraine: The world is sinking into a spiral of conflict. This is the balance of forces | International

Ukraine calls for the creation of a special court to judge Russian aggression | International
July 14, 2022

The authoritarian drift of Tunisia buries the dream of democracy of the Arab Spring | International
August 22, 2022