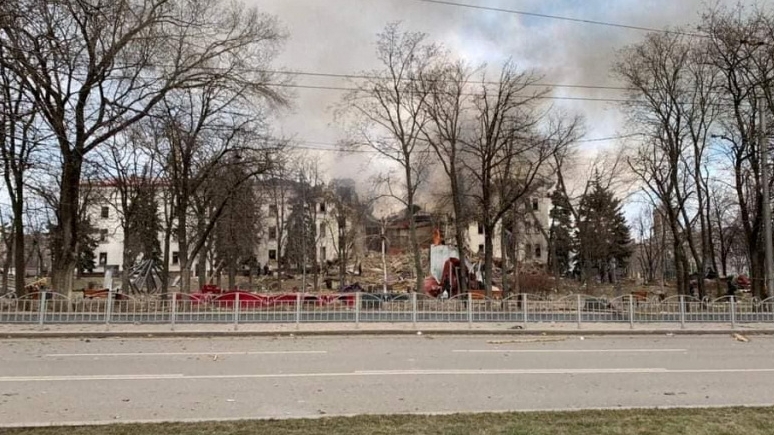 The advances that the negotiating teams from kyiv and Moscow have brought to light this Wednesday regarding the peace talks contrast with the harsh reality of the war on the ground. Two incidents have tinged with tragedy a day in which three weeks have passed since Russian President Vladimir Putin ordered his troops to invade and attack Ukraine. On the one hand, a group of civilians waiting their turn to buy bread has suffered an attack in the town of Chernigov, northeast of kyiv, according to US diplomatic sources. On the other hand, a theater in the city of Mariupol where hundreds of residents have been sheltering for days has been bombed, according to local authorities. kyiv has blamed the attacks on Moscow, which denies responsibility in both cases.

The Government of kyiv has described the bombing of the Mariupol theater as a “war crime” “in which hundreds of innocent civilians were hiding”, as denounced by the Foreign Minister, Dmitro Kuleba, through his network account socialTwitter. The tweet is accompanied by a photograph of the building before it was attacked and a second one in which, supposedly, the same facilities appear completely destroyed. So far no official balance of victims has been made. “The Russians could not have failed to know that it was a refuge for civilians,” added the head of Ukrainian diplomacy.

Another horrendous war crime in Mariupol. Massive Russian attack on the Drama Theater where hundreds of innocent civilians were hiding. The building is now fully ruined. Russians could not have not known this was a civilian shelter. Save Mariupol! Stop Russian war criminals! pic.twitter.com/bIQLxe7mli

The Russian authorities, who systematically deny that they are carrying out attacks against civilians in the former Soviet republic, have denied that their country carried out a bombardment from the air this Wednesday over that theater, according to Defense Ministry sources cited by the RIA agency.

Sources from the Ukrainian Parliament say they do not know if there are survivors and add that a strong battle broke out around the building and that no one can access the area, reports the Efe agency. Serhii Orlov, deputy mayor of Mariupol, said that between 1,000 and 1,200 people were hiding in the theater. The city, on the shores of the Sea of ​​Azov, has been one of the main targets of attacks by the Russian Army for days, which on several occasions has prevented the promise of facilitating humanitarian corridors to allow the population to leave. Mariupol was already the scene last week of an attack by Kremlin troops on a hospital.

In the other major attack that has marked the day on Wednesday, 10 people have died while waiting their turn to stock up on bread in the city of Chernigov, near the border with Belarus and about 140 kilometers northeast of kyiv. “Today, Russian forces shot and killed 10 people queuing for bread in Chernigov. Those horrible attacks must stop. We are considering all available options to ensure accountability for any heinous crimes committed in Ukraine,” the US Embassy in kyiv said in a report posted on its Twitter and Facebook profiles.

“At ten o’clock in the morning, Russian soldiers fired on people queuing to buy bread near a grocery store in a residential area of ​​Chernigov. According to the first balance, 10 civilians were killed,” the Prosecutor’s Office denounced in a statement, reports Agence France Presse. An investigation has been opened for “premeditated murders” committed with the help of “firearms”, added the same source.

As in the attack on the Mariupol theater, it has been the Russian Defense Ministry that has stated that they have not carried out this action, which they describe as “deception” by the kyiv authorities, according to spokesman Igor Konashenkov. “No Russian soldier is or has been in Chernigov. All the units are outside the city limits” and are not participating in any “offensive action”, he added, while calling Washington’s statement a “false”.

Video | Being a child in the war in Ukraine | Videos

The cellars of horror: gang rape as a weapon of war in Ukraine | International

The Link Table: The Argentine field goes on strike due to the lack of diesel

Brussels finalizes an oil embargo after Russian gas cuts to Poland and Bulgaria | International
May 2, 2022

MPLA: The party that has governed Angola for 47 years leads the count in the general elections | International
August 25, 2022

MPLA: The party that has governed Angola for 47 years leads the count in the general elections | International

Biden’s popularity recovers to its highest in a year | International
August 29, 2022

Biden’s popularity recovers to its highest in a year | International

The delivery of the new Constitution seals the beginning of a new era in Chile
July 4, 2022

Thomas Lane: One of four officers implicated in the killing of George Floyd pleads guilty | International
May 18, 2022

Thomas Lane: One of four officers implicated in the killing of George Floyd pleads guilty | International