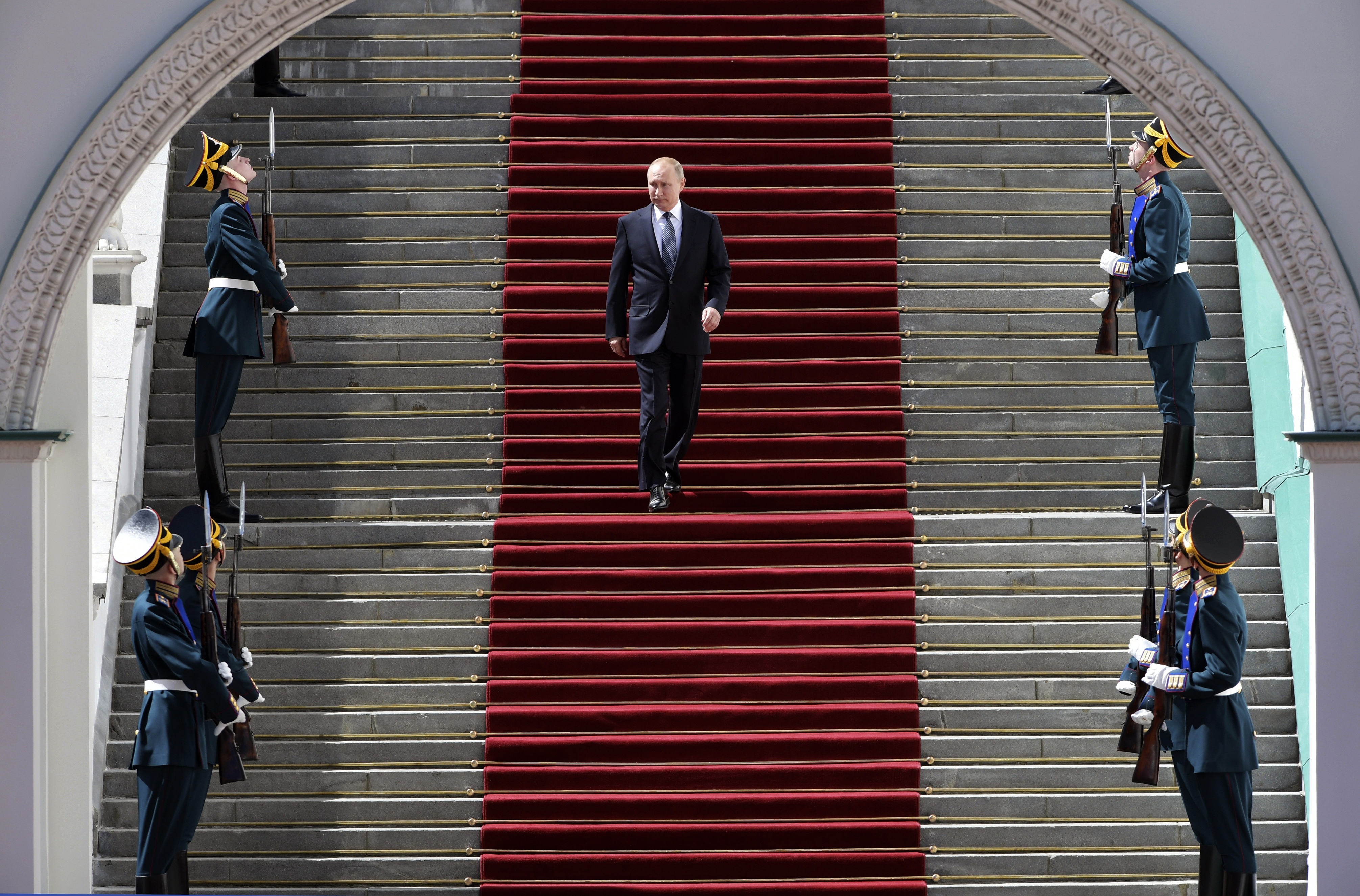 Ever since he came to power in 2000, Vladimir Putin has been building a pyramid. The Russians call this centralized structure of state administration, at the apex of which is the head of state, the “vertical of power”.

At first, the landscape around the pyramid was dotted with various constructions, which housed other institutions and organizations. Over time, the rigor and the elements became increasingly harsh for these diverse independent entities that were forced to take refuge inside the pyramid.

Elected governors were replaced by hand-picked ones, oligarchs bowed to the will of the Kremlin, the media censored or silenced, the opposition fined, sentenced, or exiled, and potentially dangerous rivals to the head of state disappeared from view. the scene, like the imprisoned Alexei Navalni or the assassinated Boris Nemtsov. By 2022 the pyramid had already been closed tight and inside it, loyalty to the leader is the supreme value.

Behind the official institutions of the Soviet Union (1922-1991) was the Communist Party (CPSU), which controlled everything through the nomenklatura, as the system of officials who were the true backbone of the system was called. In today’s Russia there are also two facades, one formal and the other real and sustaining, which tries not to leave a trace of its interference in the theoretically independent powers. In the president’s administration in Moscow there is a department of Internal Policy that tightens the reins of the entire country through relations with the deputy provincial governors. The department sets goals, establishes the information line, and monitors the results, says a source who worked in a Russian provincial administration. From Moscow the guidelines are given to the governors, who, in turn, transmit Moscow’s message to his subordinates and these to the local media, says the official who resigned in less hard times than the current ones. The obedience of the local media is ensured with resources ranging from financial support or veiled allusions to the dangers lurking outside the pyramid, where there may be investigations by the Prosecutor’s Office or financial demands from those affected by independent investigations. Moscow Mayor Yuri Luzhkov and Rosneft chief Igor Sechin won all lawsuits against critical media outlets.

Russian journalists know very well that there are names and topics that are prohibited and that a call from the Kremlin is enough to silence them. The slogans are given by phone or in meetings with the representatives of the presidential administration. To finish off the control, news media or journalists have been labeled as “foreign agent” or “undesirable” and must appear in public with a warning about their status as foreign agents or must go into exile if they are “undesirable.” Some critical media resisted to the end, such as Novaya Gazettedirected by the Nobel Peace Prize winner, Dmitri Muratov, or the echo of moscowwhose director, Alexéi Venedíktov, maintained informative pluralism despite the fact that the station belonged to Gazprom, until it was closed. Novaya Gazette she continues her work, but as far as the war is concerned, she is forced into silence imposed by censorship. Now, the silence has already reached Facebook, Twitter and other global social networks.

Organizations dependent on power have contributed to the appearance of plurality, including veterans’ associations or unions, whose leaders or members act as leaders of public opinion (the lom in administrative jargon). These lom they write letters or articles on certain topics, at the request of the administration, says the same former official. Then, that same administration acts as if reacting to the messages of these organizations and presents its own guidelines as initiatives of society.

With Putin, the country was divided into seven large districts, headed by the president’s representatives. The entire administrative structure was filled with former employees of the Security services, with no experience of territorial management.

In the Kremlin, the Internal Policy bloc has been led by a deputy head of the central administration, a position held consecutively by three figures since Putin came to power. The first was Vladislav Surkov (1999-2011), considered the inventor of the concept of “sovereign democracy” and a standard-bearer of Russian neo-imperial ideology. Surkov was also the guardian of Ukraine and the secessionist republics of Abkhazia and South Ossetia.

When Putin regained his post as president in 2012, Surkov was succeeded by Viacheslav Volodin, a politician with field experience, who has headed the lower house of parliament since 2016. The current head of domestic policy in the Kremlin is Sergei Kiriyenko, a technocrat who was Russia’s youngest head of government for several months in 1998.

In Russia, all the so-called Ministries of Force (responsible for the police, the military and security) have their vertical power and their provincial representations, but the coordination of these bodies, says the former official, does not take place at the provincial level but at the level of the representatives of the presidents who head the seven federal districts into which the State has been divided. The economic factor, in turn, serves to encourage loyalties, since the distribution of the budget between the increasingly powerful center and the regions is very opaque, as the geographer Natalia Zubarévich affirms. Last January, the head of the accounting chamber, Alexei Kudrin, finance minister for 11 years since 2000, stated that financial support to the regions had been reduced. When he was the holder of the portfolio, he said, it accounted for 70% of the State’s tax revenues; in 2018 it was equivalent to 50% and now, to 27%.

After the great protests due to the electoral irregularities in 2011 and 2012, the governors were once again “elected” through a system of filters designed to veto undesirable characters by the central power. Despite its vigilance, the Kremlin does not always manage to impose its wishes and when the chosen one is not to its liking, it usually co-opts the elected governor, making him see what awaits him (discrimination in the transfer of resources or investigations by the Prosecutor’s Office) if he insist on staying out of the pyramid. If the governor does not submit, other resources come into play, such as the State Attorney’s Office, which can hold him responsible for various irregularities.

An important figure in the construction of the vertical power is the tutor sent by the Kremlin, a character who also acts in the “black holes” (territories not recognized by the international community). In the so-called “people’s republics” of Donbas, Russian tutors (military, economic, political) curbed the expansive desires of local leaders. In May 2014, separatists in eastern Ukraine wanted to join Russia without delay. In Donetsk, a member of the improvised local parliament told this journalist how a representative of the Kremlin summoned them to ask them to be patient and limit themselves for the moment to being “the spearhead of the Russian world to destabilize Ukraine and also the West”. The separatists submitted to Russian demands. Until the time came and they launched the attack, which some wanted to culminate in Kiev and others in Lviv. By then the Putin pyramid was already a gigantic building. Outside there were only ruins, weeds and corpses.

John Bercow: An independent commission ratifies the workplace harassment of the former president of the British Parliament | International

Elections in France 2022: Le Pen seeks a comeback against the favorite Macron in the only electoral debate of the campaign | International
April 20, 2022

Elections in France 2022: Le Pen seeks a comeback against the favorite Macron in the only electoral debate of the campaign | International

Last minute of the war in Ukraine, live | More than 22,000 residents killed in Mariupol since the invasion, according to Ukrainian authorities | International
May 25, 2022

Last minute of the war in Ukraine, live | More than 22,000 residents killed in Mariupol since the invasion, according to Ukrainian authorities | International

Nikolai Leonov, the man of the Kremlin in Latin America | International
May 2, 2022

Nikolai Leonov, the man of the Kremlin in Latin America | International

Elizabeth II dies: How to lose an empire without losing your composure | International
3 weeks ago

Elizabeth II dies: How to lose an empire without losing your composure | International