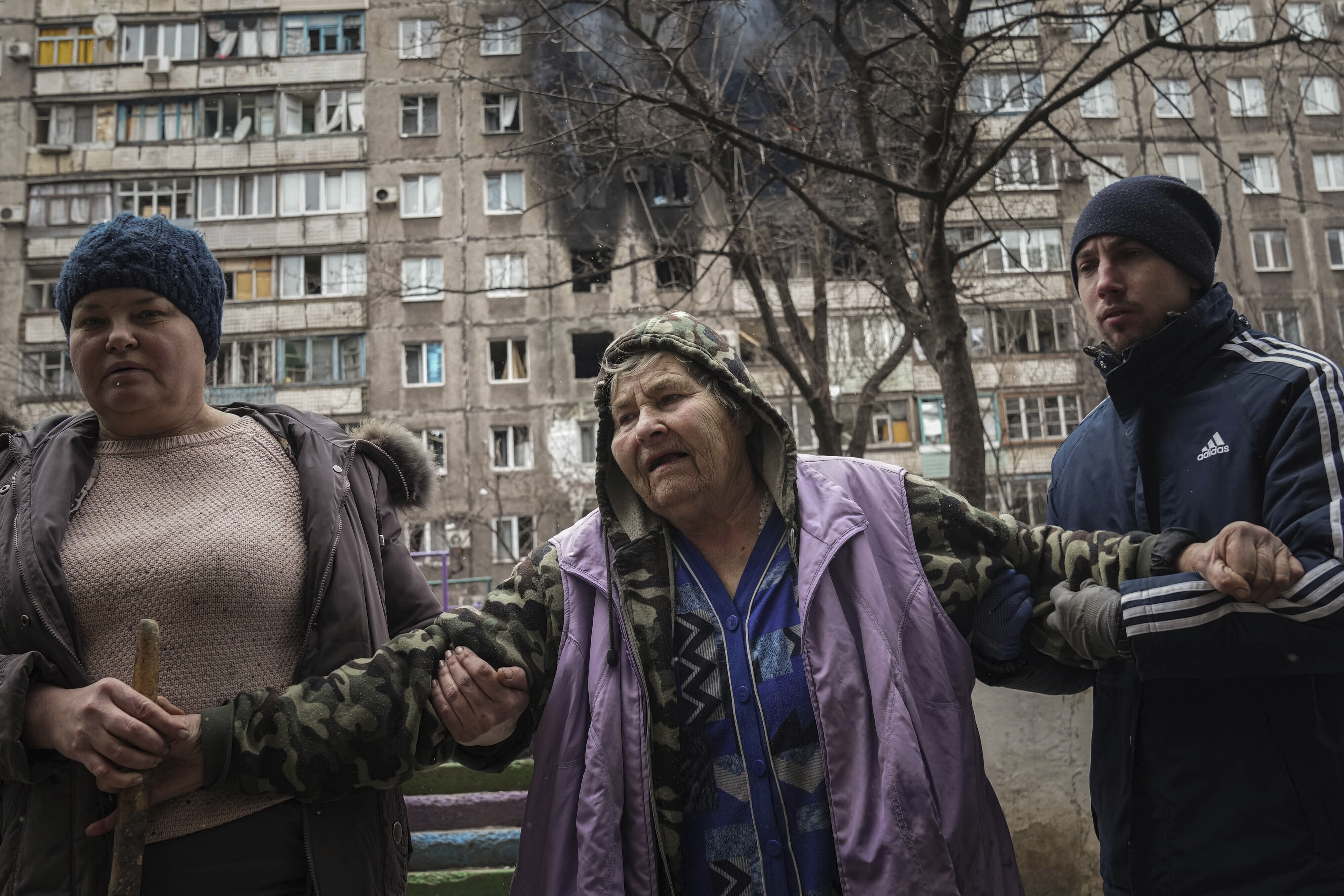 Russia and Ukraine on Wednesday renewed a hitherto unsuccessful commitment to silence the weapons so that civilians can escape from five cities under fire from the fighting and from several towns near Kiev, the capital. In total, six humanitarian corridors that, in principle, will be in force between 9:00 a.m. and 9:00 p.m. local time, Ukraine’s Deputy Prime Minister Iryna Vereshchuk has reported. The truce will include the besieged city of Mariupol, in the southeast of the country, a strategic enclave subjected to constant bombardment for days and where there is hardly any food left, according to testimonies collected by EL PAÍS. The Red Cross has even described the situation facing civilians in Mariupol as “apocalyptic”, Reuters reports. The threat of extreme deprivation does not only hang over that city. The spokeswoman for the United Nations High Commissioner for Refugees in Spain (UNHCR), María Jesús Vega, told this newspaper that, if the escalation continues, up to 12 million Ukrainians will soon need humanitarian aid to survive.

In a video statement, Vereshchuk confirmed that the Ukrainian armed forces had agreed to stop firing in the areas agreed as humanitarian corridors in the time slot scheduled for the ceasefire and urged the Russian forces to cease the attacks. “I appeal to the Russian Federation. They have made official public ceasefire commitments from nine in the morning to nine at night. We have had negative experiences when the commitments made have not worked”, stressed Vereshchuk.

The number two of the Ukrainian Government alluded to the successive failed attempts of the last five days to open safe corridors for the trapped civilians in which both parties have blamed each other for not having respected the successive truces. The latest of these failures took place this Tuesday when just a few thousand people managed to flee the northeastern city of Sumi (northeast) and Irpin, near Kiev, through two humanitarian corridors, according to official data from the Ukrainian authorities. . The Ukrainian government later accused the Russian forces of having attacked those routes, in which the evacuation took place by drops, and above all, that of the besieged city of Mariupol.

The six safe escape routes that should allow civilians to get to safety this Wednesday run between Mariupol and Zaporizhia, Enerhodar to Zaporizhia; from Sumi to Poltava; from Izium to Lozova; from Volnovakha to Pokrovsk, and from various cities around Kiev – Vorzel, Borodianka, Bucha, Irpin and Gostomel – in the direction of the capital. At the moment, it is unknown if the evacuation is proceeding without incident. It is known, according to official Ukrainian sources cited by Reuters, that some private cars have managed to leave Sumi and that a convoy of refugees, made up mostly of women and children, has also left Enerhodar.

According to the Ukrainian authorities and testimonies from within the city, the most serious situation is that suffered by the citizens of Mariupol, the city on the coast of the Sea of ​​Azov, on the Black Sea, whose situation the Red Cross has defined as “apocalyptic”: the city has been completely besieged by Russian soldiers for more than a week, the same time that it has been without water, heating, electricity, mobile coverage or internet connection, and with civilians taking refuge underground to shelter from relentless bombardment. The little information that comes from within the city confirms that its almost half a million inhabitants are already experiencing a human tragedy. Some 200,000 people are trying to flee the city, according to the International Committee of the Red Cross.

Yulia, a 50-year-old accountant who managed to flee the city on Monday on foot, told EL PAÍS that the city’s stores no longer have supplies. The inhabitants have begun to cook with the snow they collect from the ground in improvised fires in parks and gardens. Each neighbor brings what little they have left at home to be able to cook it and share it with the rest. “The war has taught me that in case of need you would drink even the water from the puddles,” confesses this Ukrainian citizen, reports Margaret Yakovenko.

In the center of this important port and metallurgical production town in southeastern Ukraine, the ruins of destroyed buildings and dead bodies are piling up. Some cars have been abandoned in the middle of the road with their occupants killed by projectiles inside. The authorities are burying the dead in mass graves because it is impossible to do otherwise because of the continued bombing. Ukrainian President Volodymyr Zelensky reported Tuesday that a 6-year-old girl from Mariupol had died of dehydration the day before for not having gotten water to drink..

The Ukrainian deputy Dmitro Gurin, citing sources from the office of the mayor of that city, has confirmed to the BBC that the situation in the coastal city, whose control is key to closing Ukraine’s maritime access abroad through the Black Sea, it’s dramatic. “There is only food left for three days,” Gurin stressed.

This deputy maintains that the Russian Army is “razing” the city with its missiles and has warned that, in his opinion, “the Third World War has already begun”, so that Western countries should not hesitate to decree a zone of no-fly in the Ukrainian skies.

One in four Ukrainians will need help

The UNHCR office in Spain has denounced this Wednesday, in statements by its spokesperson, María Jesús Vega, that “if the escalation does not stop” in a “short period of time” between “ten and 12 million Ukrainians will need humanitarian aid from urgency to survive”; that is, food, water, basic supplies and accommodation. This calculation encompasses practically a quarter of a population of just over 44 million people. The spokeswoman specifies that this figure refers to people who will remain in Ukraine, not to the between four and five million refugees – more than 2.1 million Ukrainians have already left the country – that UNHCR estimates will flee the Russian invasion of Ukraine. the former Soviet republic.

“We must bear in mind that, before this war, there were three million Ukrainians who needed humanitarian assistance to survive,” emphasizes Vega. To this already urgent situation, caused by the conflict in the east of the country, in the Donbas region, in conflict since 2014, “now adds this new war and enormous levels of destruction,” the spokeswoman emphasizes. Vega advocates not forgetting that if the economic consequences of this war will undoubtedly be serious, “the human consequences” will be even more so. “The impact of this war on human lives, on refugees, on internally displaced persons and on destruction will undoubtedly be brutal,” stresses the spokeswoman for the UN refugee agency.

Humanitarian corridors are used to allow civilians a safe route to escape war. According to International Humanitarian Law, this is not a concession by the contenders, but rather a legal obligation, established in the 4th Geneva Convention of 1949 and its additional protocols of 1977, which oblige the parties to protect civilians in wartime, facilitate their safe withdrawal and allow the free passage of food, medical supplies and other essential goods.

These theoretically safe escape routes consist of a temporary cessation of fighting to allow the civilian population to flee along previously agreed routes. The term was first evoked in the 1990s, during the war in Bosnia, in the former Yugoslavia, when the United Nations established what it defined as “safe areas” for civilians to leave combat zones and, above all, of the cities that, as is happening now in the Ukraine, are under siege. The United Nations General Assembly explicitly mentioned these corridors for the first time in 1990.

In Ukraine, many people also find it difficult to flee: elderly, disabled or simply people without means who have nowhere to go. For example, one in four Ukrainians is over 60 years old, according to the humanitarian organization HelpAge, which cites official sources in the country. Many of them have mobility problems, as well as a greater resistance to leaving their lives behind.

Today’s ephemeris: What happened on October 3?
46 mins ago

Elections in France: The baker defending migrants who wants to be a deputy for the Mélenchon alliance | International
June 18, 2022

Elections in France: The baker defending migrants who wants to be a deputy for the Mélenchon alliance | International

Ukraine: Odessa is back in Russia’s crosshairs | International
May 4, 2022

Ukraine: Odessa is back in Russia’s crosshairs | International

Nine Eastern countries demand more military presence on the eastern flank of NATO after the invasion of Ukraine | International
June 10, 2022

Two Hellfire missiles aimed at a balcony in the center of Kabul: this is how the US has killed Ayman al-Zawahiri | International
August 3, 2022

Two Hellfire missiles aimed at a balcony in the center of Kabul: this is how the US has killed Ayman al-Zawahiri | International

Saudi Arabia sentences a woman to 34 years in prison for her comments on Twitter | International
August 17, 2022