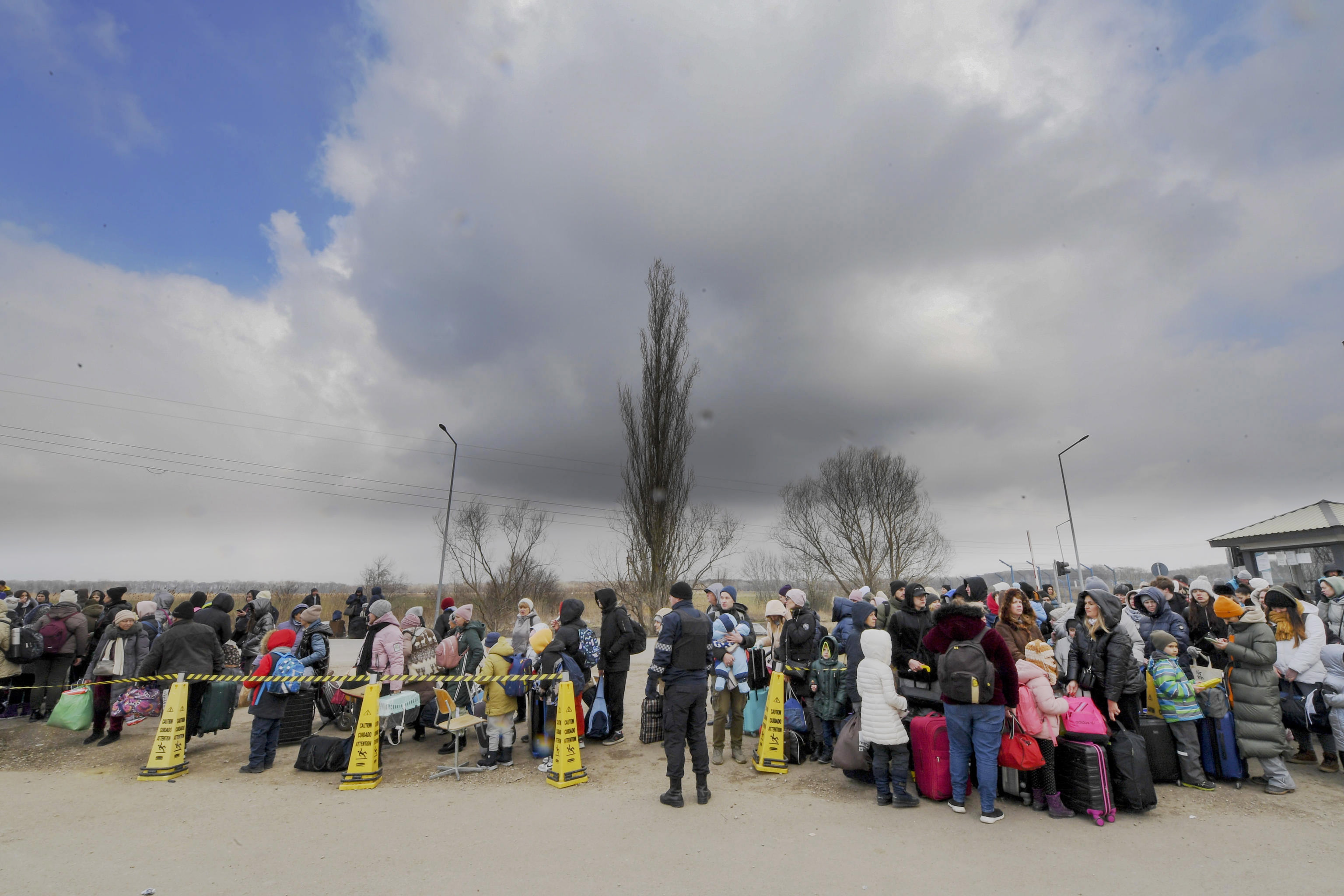 With just 2.6 million inhabitants, a pro-Russian separatist enclave (Transnistria) on its territory and a poorly equipped army of 7,000 soldiers, the former Soviet republic of Moldova watches the Russian offensive in Ukraine with fear at its seams. On the one hand, and most urgently, because it is Ukraine’s neighbor that is receiving the most refugees in relation to its population (four per 100 inhabitants); on the other, because it does not have enough bellows if the crisis continues: it is one of the poorest countries in Europe and depends entirely on Russian gas. There is also the fear of being the next —and easiest— country to be attacked by Moscow —Moldova, like Ukraine, is not in NATO— or that its delicate internal balances will unravel, with a Constitution that enshrines neutrality, a considerable pro-Russian population and a pro-western president and former World Bank economist who has just formalized the country’s request for entry into the EU.

“We are by far Ukraine’s most fragile neighbor,” its foreign minister, Nicu Popescu, admitted last Saturday, warning that Moldova “is approaching the breaking point.” Sandwiched between the much larger Ukraine and Romania, and without access to the sea, the country is suffering a severe economic blow from the war, with the loss of imports from Ukraine (mainly through the port of Odessa), from cross-border activities and falling investor confidence, he added.

Moldova is primarily a transit country for refugees fleeing Ukraine. Of the 250,236 who have entered, just over 100,000 still remain in the transit centers authorized by the Government and local entities. The authorities are providing free rail and road transport to Romania, from where they move freely to other parts of the EU. Its airspace has been closed since the beginning of the war, on February 24, but the Moldovan government has started the process to charter flights for refugees.

Moldova has asked the International Monetary Fund to “reorganize and increase” its program of 564 million dollars (about 517 million euros), given the risk of collapse if Russia intensifies the attacks in nearby Odessa and in Kiev; and the arrival of refugees, which the UN already forecasts at four million in all neighboring countries, skyrockets even more. The president, maia sanduHe has also asked for international aid. “We are receiving help, but Moldova is not prepared for such a situation,” admits Segeu Bejerani, an employee of the Chisinau City Council who these days works at the reception center in the sports palace in the Moldovan capital, where half a thousand refugees rest on portable beds arranged in rows, without showers or hot food.

Angela Croitor, head of the Red Cross in the city of Drochia, in the north of Moldova, stresses that there has not yet been a mass arrival in the cities near the northern border and there is a certain local response capacity with citizen contributions. “We have to prepare ourselves, because now people are helping, but the situation can get worse. We suspect that the problems that already exist in the region, such as unemployment, will be the ones that the refugees who remain will also suffer,” she adds. A prelude to tensions that she asks to anticipate, because the crisis may continue.

The strategic importance of Moldova these days, despite its low population and economic weight, has not gone unnoticed in the chancelleries. Last week it received two important visitors: the head of EU diplomacy, Josep Borrell, and the US Secretary of State, Antony Blinken, on Sunday. In Chisinau, Blinken made it clear to the Moldovan authorities that, in the event of a Russian attack, Washington will act as it is doing with Ukraine. “When and where there could be that aggression, we would do the same,” he said at a press conference with the Moldovan president. He also supported Chisinau’s entry into the EU, although he made it clear that this decision is up to the member states.

Moldova looks with one eye at the advance of Russian troops in Ukraine and, with the other, possible movements in Transnistria, the pro-Russian separatist enclave in its eastern fringe, which borders Ukraine and proclaimed itself independent in the early 1990s, with the dismemberment of the USSR. No one, not even Moscow, its great supporter, has recognized this declaration of independence. Tiraspol, the capital de facto of Transnistria, it is about 100 kilometers from Odessa, on which a great offensive is feared due to its strategic importance and the advance of Russian troops in the Black Sea from the east. If the assault on Odessa (almost a million inhabitants) were launched from Transnistria, where around 2,000 Russian soldiers are deployed, Moldova would be destabilized, warns Armand Gosu, professor of geopolitics of the former Soviet space at the University of Bucharest.

The Transnistrian Army also has 10,000 soldiers, controlled by the Russian security service, as in the case of the self-proclaimed republics of Donetsk and Lugansk, in the Ukrainian Donbas. In contrast, the Moldovan armed forces, with 7,000 troops who lack training and weapons, could hardly resist a foreign invasion, not even just from the Russian troops stationed in the separatist region.

“Russian troops can occupy the capital of Moldova in a few hours. The situation is very fragile in this small republic. It is a neutral country, which is completely dependent on Russia for energy and has parties that sympathize with Moscow and are very active, ”says Gosu, also a doctor in Russian History from Moscow University. “It is under threat from Russia, since the Kremlin wants to keep it in its zone of influence,” he points out before recalling that in Moldova “the broadcast of Russian propaganda channels is not prohibited” nor have there been significant protests against the war, unlike most Western countries, where tens of thousands of people have taken to the streets to demand an end to the Russian offensive.

The president of the country has been forced to come to the fore. “There are no signs that the Republic of Moldova is exposed to any risks related to the war in Ukraine and no precondition for Moldova to get involved militarily in this conflict; no army mobilization order has been issued,” he said last Saturday, after a Ukrainian deputy stated that Chisinau intended to declare a state of siege because he had received information that Russia was going to attack Moldova. “According to the Constitution, Moldova is a neutral country; we will not get involved in any way in the conflict of the neighboring country, ”she insisted. The president of neighboring Romania, Klaus Iohannis, expressed himself along the same lines during a visit to the Siret border post with Ukraine on Saturday. He ruled out that Moldova – where more than a million inhabitants have a Romanian passport – is in imminent danger.

Gosu does see, on the other hand, that it is feasible for Russian President Vladimir Putin to attack another territory that he considers his sphere of influence if he achieves in Ukraine the military advances that have resisted him and wins the war in a short time. “He feels humiliated by the West, so he may be thinking of attacking Poland, Romania or the Baltic countries,” he asserts.

Transnistria has limited itself to once again requesting the international community to recognize its independence within the framework of a dialogue process. It did so a day after Chisinau submitted the application for EU membership, which the Twenty-seven welcomed last Monday, in record time. “In the context of the new circumstances, including those created by the actions of the Moldovan leaders, we call on the Moldovan side to start a dialogue with the Transnistria region, with a view to a final civilized solution of relations based on the peaceful existence of two independent States through the signing of an interstate agreement”, stressed the diplomacy of Transnistria in a statement.

“Tiraspol has always played an important role in Russia’s strategy of tensing the situation in Moldova, regardless of events,” explains Mihai Isac, a geopolitical analyst at the Karadeniz Press, who adds that “Kiev is forced to maintain important military forces on the border with Moldova due to the presence in Transnistria of the Russian Army group and the paramilitary forces of the separatist regime”.

Some 500 Russian soldiers in the eastern part of the Dniester River are part of peacekeeping forces, while the other 1,500 belong to the Operational Group of Russian Troops, with no legal basis to guard an ammunition depot of the former Soviet Union in the town of Cobasna. This unit is directly subordinate to the Western Military District of the Russian Army in St. Petersburg. In this warehouse, the Organization for Security and Cooperation in Europe estimates that there are still some 20,000 tons of weapons.

The Minister of Infrastructures of Portugal: “It is inexcusable that the Portuguese and Spanish do not solve the railway connections” | International

Bonoloto: check the result of the draw today, Saturday, October 1, 2022
2 hours ago

The freedom of Antauro Humala alters the unstable Peruvian political board | International
August 22, 2022

Central heating: when it is turned on, prices and who has to pay for it in the community
2 days ago

Central heating: when it is turned on, prices and who has to pay for it in the community

Kaliningrad is not afraid of NATO | International
July 4, 2022

Kaliningrad is not afraid of NATO | International

Pegasus: Governments around the world have ordered internal searches for the threat of Pegasus | International
May 2, 2022

Pegasus: Governments around the world have ordered internal searches for the threat of Pegasus | International

The European Parliament asks to include Schröder in the black list of the EU for being in the pay of Russian companies | International
May 19, 2022

Argentina immerses itself in the death of 500 indigenous people in the Napalpí massacre | International
April 20, 2022

Trump redoubles his presidential order in Washington: “This country is going to hell” | International
July 27, 2022

Trump redoubles his presidential order in Washington: “This country is going to hell” | International

The EU agrees to the first energy sanctions against Russia by vetoing the import of coal | International
April 7, 2022